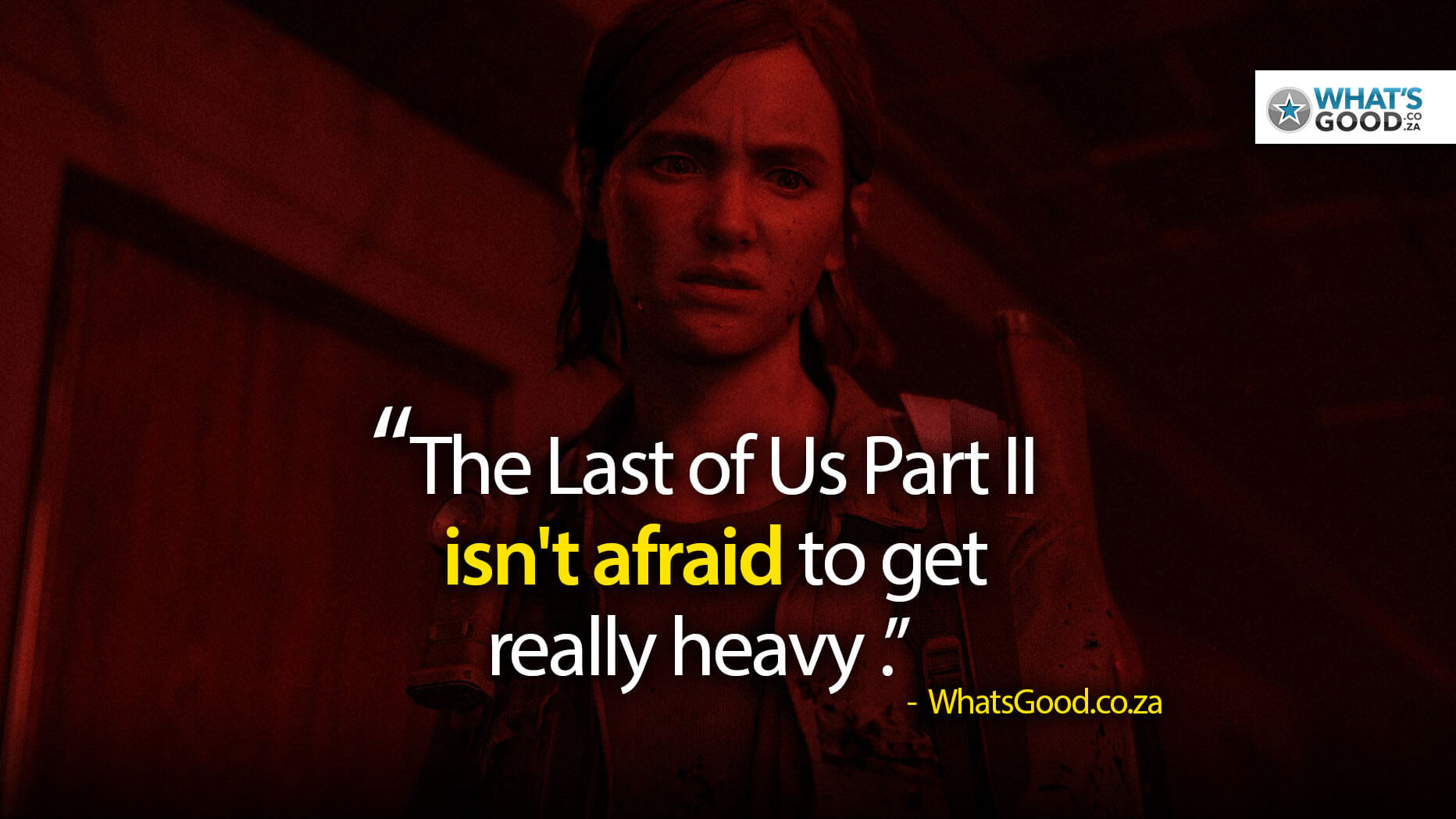 The highly-anticipated sequel to Naughty Dogs heavy hitting PS3 title is here, and it’s not afraid to try something new

Summary 4.5 Great
Gameplay 5
Quality 5
Experience 4
Value 4
Summary rating from 1 user's marks. You can set own marks for this article - just click on stars above and press "Accept".
Accept
Summary 4.5 Great

IMPORTANT NOTE: This review avoids all spoilers for The Last of Us Part II but it will potentially spoil the first game. If you haven’t played Part 1, I highly recommend that you do before playing this or even reading this review.

Right off the blood-soaked bat I feel it’s worth mentioning that The Last of Us Part II is the sequel to a game that I consider to be one of the best games of all time and one of my all time personal favourites. That means that for me personally (but I know I’m far from alone), expectations and hopes were sky high going in.

What The Last of Us Part II delivers is an incredibly bold, emotional, violent and most definitely risky piece of interactive storytelling about revenge that will make you question the characters, yourself and the the toll that revenge takes. It also has slick, engaging stealth, combat and overall gameplay that improves over the previous game in every way.

The cherry on top is that it’s all wrapped up in maybe the best looking and sounding console game ever made – and I mean that pretty sincerely. The time for photo-realistic visuals is coming, and the developers at Naughty Dog seemed to have bought us tickets to an early screening. Just like how TLOU felt like a PS4 game already running on a PS3, so too does Part 2 feel like a PS5 game that’s arrived early.

There’s almost literally too much to talk about when writing about this game, as its messages also build and evolve in your mind over time as you time to think and read up on other views. So with that in mind, I’d urge you to go in as blind as you can (after playing the first game) and then open your mind and let the story do its thing because it has some seriously unexpected turns, and you need to be ready to accept the experience that’s been crafted.

While I’m happy to call The Last of Us Part II the absolute masterpiece that it is, as well as a praise it for being a high-point in interactive storytelling, I find myself clear-headed enough to also realise that this isn’t a game that’s easily recommended to just anyone.

It’s sort of the gaming equivalent of high-art that not everyone might appreciate, or even want to appreciate. It’s for those who are looking for a deep, brutally violent, thought-provoking, at times highly uncomfortable experience rather than just a good ol’ time jamming on the Playstation.

The Last of Us Part II isn’t afraid to get really heavy… in fact, it’s almost the whole point.

The Last of Us Part II mostly takes place roughly 4 years after the events of the first game, with Ellie taking over as the protagonist, a bit more grown up and settled into the city of Jackson where they arrived at the end of Part 1.

I pretty much can’t talk about anything else without spoiling the direction that the story takes, but what I can say is that this is a journey created to make you question the concept of heroes and villains, to strip away black and white and to accept that it’s never that easy; to make you feel anger, regret, shame, loss and sometimes even feel straight up disgust in characters you know as well as characters you’re only just meeting.

That’s not to say that it isn’t without some touching, memorable, beautiful moments too. There are plenty of them, and they make every bleak moment completely worthwhile.

The campaign stretches all the way to around 30 hours this time around and has New Game + modes to attack for additional play-throughs. The variety of locations are truly stunning to behold as you bounce between exploring the beautiful, overgrown post apocalyptic landscape, engaging in combat with various other human factions and soiling your pants during incredibly tense survival-horror sections with infected. For realsies, this game can get hella scary at times.

The truth of the matter is that while the game tells a big story, the campaign does feel like it drags on a bit at times, with at least a handful of sections that may honestly have worked just as well if they were tightly edited cutscenes – instead of stretched out sections of gameplay to get characters from here to there.

Just like the previous chapter in the series, it challenges you to deal with the differences between your feelings and motivations and how they differ from the action and intentions of very imperfect characters that you’ve grown to love. This is also why I partially get why things can run a bit long, as the game doesn’t shy away from taking extra time to help fully develop characters through small little interactions along the route.

The good news is that any dragging on is often still forgivable thanks to the incredible hand-crafted, varied, highly-detailed locations and solid gameplay mechanics.

It’s also worth nothing that The Last of Us Part II has some of the most incredible accessibility settings, allowing you to almost fully tailor experiences to your limitations or preferences. What I do find rather out of place, is that they have worked so to create the most accessible game to date, in a game that is itself not all that accessible to the average gamer in terms of tone and content.

Ripping a knife through someone’s throat and hearing them choke and drown on their own blood has never been more accessible. Still, it sets a great bar going forward and I hope many games follow suit.

While I personally embraced the characters and topics being explored in the game and found myself enriched by them, it’s also a reality that some people might find some of the game’s messages a little preachy and heavy-handed with topics such as sexual preference, gender identity and so on.

But hey, we play games for new experiences and it was actually pretty refreshing to realise that I was playing a major AAA game with an entire cast of characters that were so different to everything I’ve seen a thousand times over. If you think this sort of thing might be a turn-off for you, I implore you to go in with your mind open and see how it sits with you by the end.

Despite a few cons, and feeling like the first game hit home with me the best, I still consider The Last of Us Part II a true masterpiece that may only really be fully appreciated in years to come.

It’s not an Uncharted-like adventure game that’s for everyone though, even compared to the first game. It’s a hell of a story to take in when all is said and done, and provokes further thought and discussion while also happening to blow your mind from a technical point of view.

The Last of Us Part II is one of the best games of this generation, earning its place alongside God of War, The Witcher III, Horizon Zero Dawn, Red Dead Redemption 2, Spider-Man, Bloodborne, the Final Fantasy VII Remake, Breath of the Wild and other top titles.