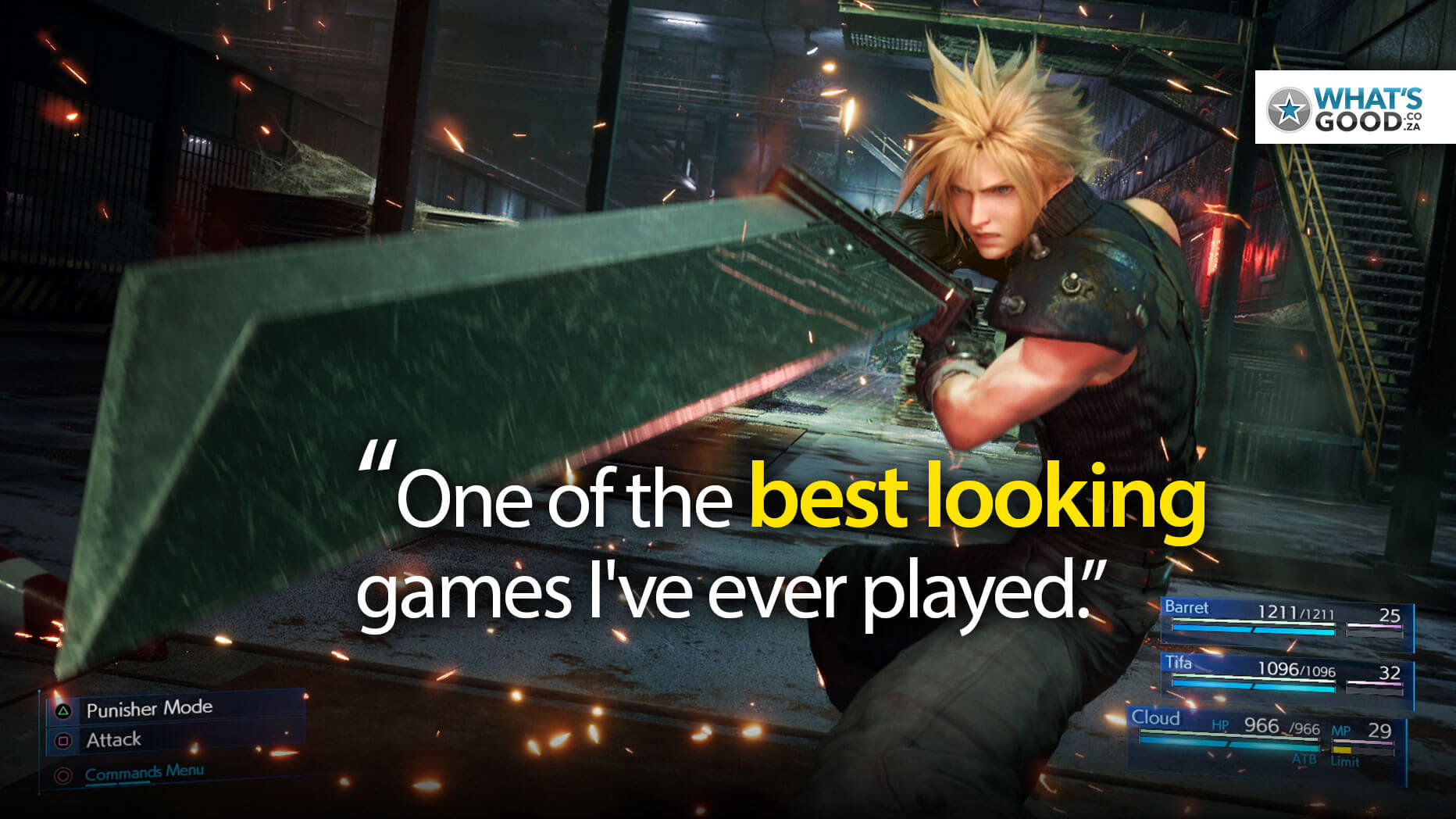 The FF7 Remake won me over in every way

What is the Final Fantasy 7 Remake?

Final Fantasy 7 Remake is a… well, remake of Final Fantasy 7, the beloved JRPG that won over the hearts and minds of Playstation gamers in 1997. This 40-hour experience is only part one (but a very beefy one at that) of an episodic release plan, and is an expanded version of the original game’s first setting (and disk). Ex-soldier-turned-mercenary Cloud joins a group of eco-warriors called “Avalanche” as they set out to destroy an evil corporation’s power stations that are providing energy at the expense of the planet.

More Than A Remaster

The word ‘remake’ is used in its full capacity here, as FF7 Remake truly is a full-blown remake (and more) of the original and not just some HD remaster. Old low-polygon 3D graphics and turn-based combat has been replaced with incredible cutting-edge visuals, and the combat has been converted to a fun and challenging real-time version of the original systems. Characters can be controlled in a similar fashion to an action game, with buttons for attacks and special abilities.

In a similar vein to the original systems however, you can slow time down with menus that allow you to cast spells, use items or perform special abilities that are unlocked by using and levelling up weapons. Easier difficulties handle more of the combat load so you can just focus on actions. 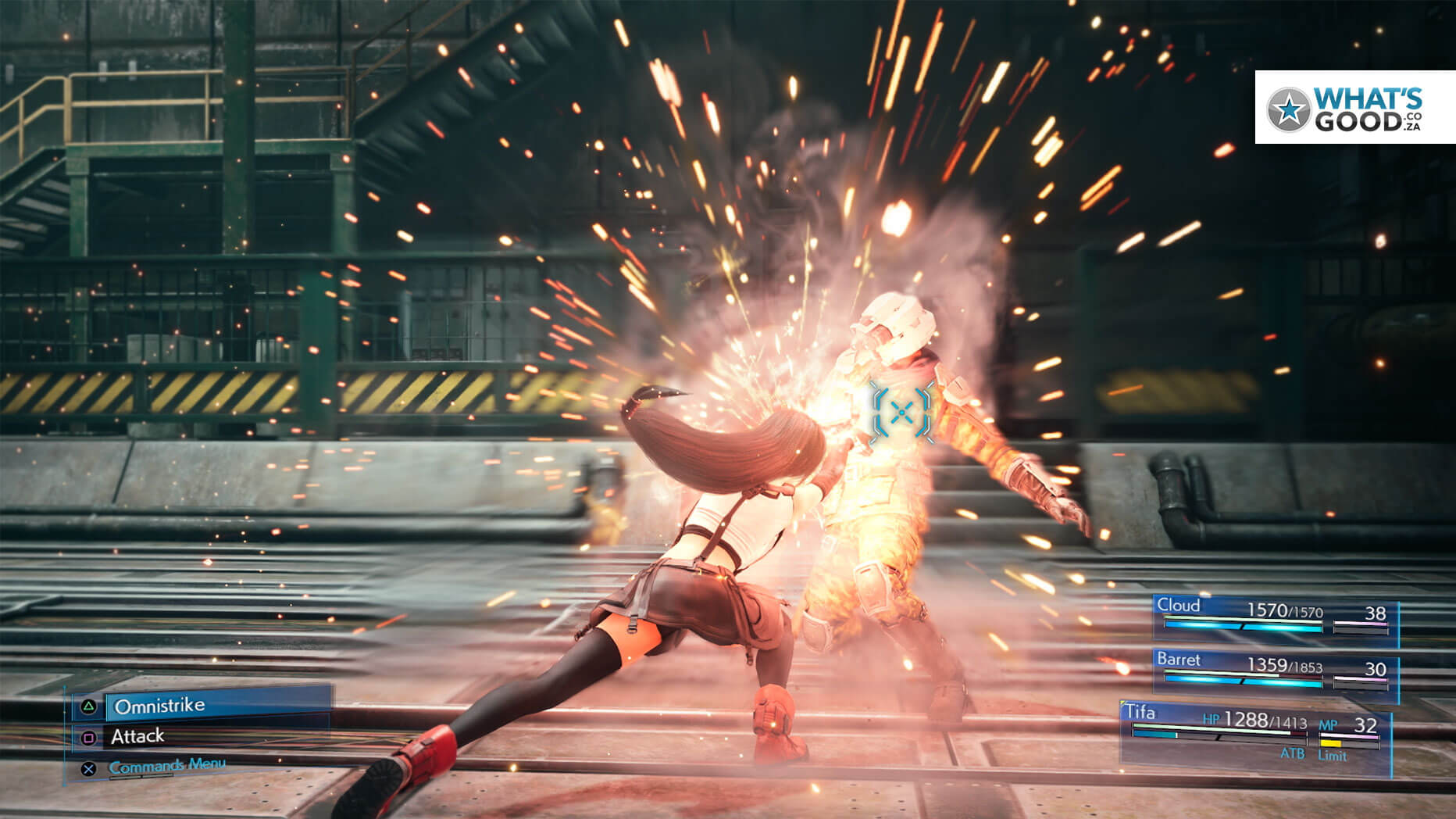 As you play you level up, get new weapons and learn to slot rune-like ‘materia’ into your equipment for abilities and combinations. The system provides incredibly satisfying combat when everyone in your team is working together and your materia has been set up just right.

Many areas that were quickly passed through in the original are now fully explorable areas, with characters, side missions, mini-games and more. This might feel like some unnecessary padding to a game that could have survived without them. They gave me more reason to be in the world they crafted though, so I liked them. The story and its missions take you to multiple, varied locations and you’re treated to interactions with a wide variety of interesting and endearing characters.

The real depth of the story, however, comes from the relationship that the characters (and you) form with each other over the course of the story. Cloud is a bit of a dull, wet blanket when compared to the other loud, bubbly and talkative characters but he provides the link and platform for the other magnificent personalities to shine.

What made a HUGE difference to the experience for me, was that the stunning game engine’s ability to seamlessly move between live in-engine cutscenes and gameplay. This allows the game to inject tons of high-quality, cinematics-level story moments into the gameplay.

If there’s one small issue the game has, it’s only that some of the visual assets aren’t as high quality as others. This means that you’ll come across low quality textures and models that look like they’ve not loaded in. To be honest it didn’t really bother me all that much and if it’s the trade-off for making the development and performance of a game like this more possible, I’m actually all for it.

Most of the time, the visuals are so good that if my characters didn’t have the equipped weapons I gave them with the same materia in the slots that I’d fitted, I wouldn’t believe that most of it wasn’t pre-rendered. How this game looks and runs this well on a standard PS4 is a mystery, and on my PS4 Pro it was just sublime. To cap it all off, the sound design, voice work and especially soundtrack are top-notch to say the least.

Despite the hype and buzz from fans leading up to release, Final Fantasy 7 Remake took a newcomer like me by complete surprise. It will undoubtedly be one of my favourite games of not just the year, but this entire console generation. It’s one of the best looking games I’ve ever played, with an engaging combat system, just enough exploration (that feels rewarding) and characters in a story that kept me hooked from start to finish. I miss it already, and simply cannot wait for the next instalment.