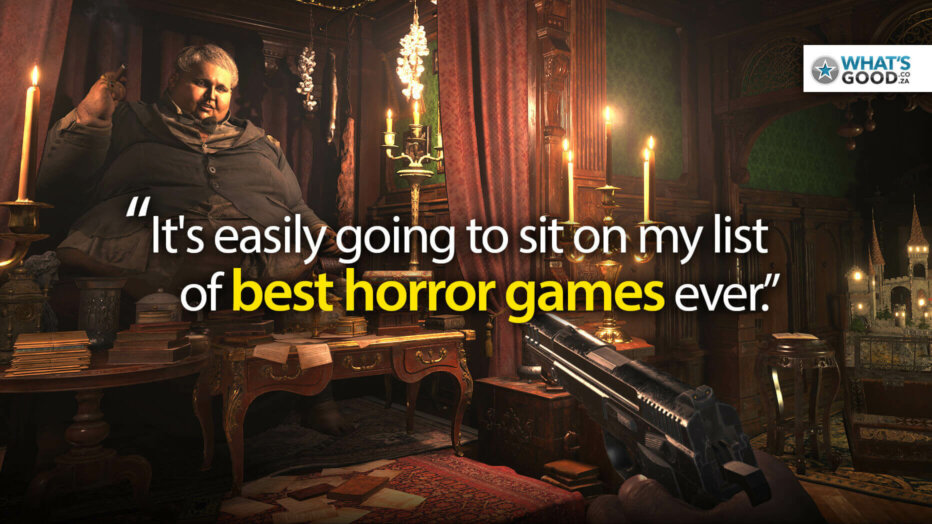 Resident Evil Village, the direct sequel to the terrifying but beloved Resident Evil 7: Biohazard has been out for a few days now, and it’s a huge success for Capcom, with a buttload of people playing it around the world.

We’ve been sinking a lot of hours into it, but admittedly haven’t made as much progress as we should have because we just can’t stop pausing to look at everything, clear ever area and find all the goodies hiding in the world. In many ways I find that this is what still makes Resident Evil games special; they know they are video games and they lean into it. I’m not here to spoil anything about the story, enemies and environments so for the most part I’m going to be steering away from those elements.

In short, this game is so impressive. It’s blown me away visually on so many occasions, and while things can get really harrowing at times, the joy of the experience that comes from exploring the world and unraveling the story is the same as it’s always been.

Here’s the very, very quick, casual video of our impressions that we put up after playing for only the first few hours. Carrying on reading for more.

So far, the Resident Evil Village experience has been pretty top notch, and a lot of that is owed to stunning visuals and incredibly high-quality art and sound design. We are playing it on Xbox Series X, which means we are getting to enjoy a full 4K experience at 60fps, and even with ray tracing turned on, the performance is incredible smooth and solid.

Speaking of ray tracing, the Digital Foundry analysis video about Resident Evil 8 said that ray tracing wasn’t a core part of the game experience so it can be turned off if you want solid performance, but while the Xbox Series S does see a significant drop with RT on, the Series X is near-perfect, and for me personally it’s REALLY added a lot to the experience and I wouldn’t dream of turning it off.

In short, the game looks incredible no matter where you are, with locations that vary from rustic, dirty outdoor village areas to pristine castle foyers and lavishly decorated rooms.

As a direct sequel to the first ever first-person Resident Evil game, Resident Evil Village has a lot in common with Resident Evil 7 in terms of the controls and gameplay. As you well know though, it’s often the level design, enemies and puzzles that make up the core experience that matters.

I’ve found that Resident Evil 8 has toned down the sheer level of terror and dread that make Resident Evil 7 the true horror game (also, the setting of 7 gave me the absolute creeps) that it was, and so far has replaced it with a really deep, satisfying sense of mystery and intrigue. That’s not to say it doesn’t have it’s fair share of scares, because it does. Goodness knows a scare I got from a farm pig shaved a few years off of my life.

Most of the experience is delivered through levels of tension and stress, which for many people will be way more bearable than big jump scares – but that might depend on you. When things get very hairy, it can feel tough to carry on and my surround sound setup REALLY doesn’t help (although it’s so damn good).

Resident Evil Village is really great, and it’s easily going to sit on my list of best horror games – not to mention that it will be fairly high up on my best Resident Evil games list as well. If you’re into horror games and RE game in general, you absolutely owe it to yourself to play it.