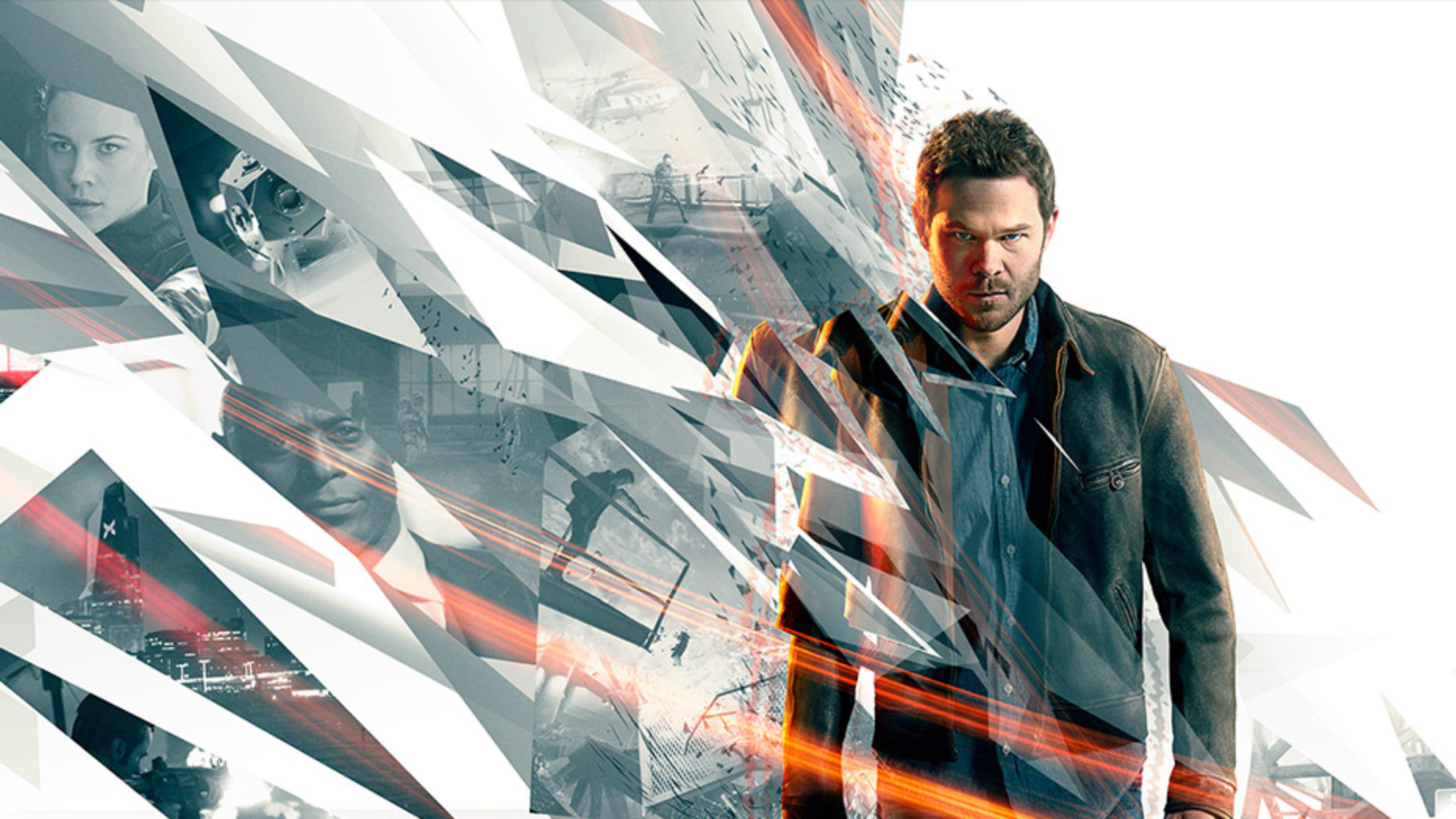 Part super-powered action game, part TV show. All worth it

What is it? Quantum Break is a single-player, highly cinematic narrative-driven shooter that combines aspects of third-person special powers/shooter gameplay, investigative exploration and TV inspired live-action episodes that change depending on the player’s actions. The cast includes actors such as Aidan Gillen, Dominic Monaghan, Shawn Ashmore and Lance Reddick.

Quantum Break is a very special game and it’s one that has firmly planted itself deep in my heart in the same way that Remedy’s last game Alan Wake managed to do. For some reason, I wasn’t completely drawn to Quantum Break before its release. I mean, I sort of was… but I think it could be that I was so afraid that it wouldn’t do for me what Alan Wake did last generation that I already had the feeling that it wouldn’t live up to my expectations.

I was wrong, because what started off as a romp into some time-travel story with some fun, cool looking gunplay and time powers slowly started working itself into a very unique experience that only got better as the plot unfolded over the course of 12 to 15 hours or so. The deeper I went down the rabbit hole the better it got and the more time I spent thinking about the story (including an almost necessary second play-through) the more and more I realised that it was something I wouldn’t forget any time soon. The story is not only incredibly smart, but it will leave your head aching as you attempt to wrap your mind around all the elements at play and the complexities that only time-travel stories can offer. The story also does something special in that it opens you up to not only just the protagonist’s view, but the thoughts and motivations behind many of the characters, breaking down many typical roles into far more and allowing you to realise that in many cases, everyone is the hero in their own story.

The (mostly) impressive cast includes familiar faces from some of TV’s finest, including LOST, Game of Thrones, Prison Break and Fringe, with the protagonist and antagonists’ roles taken on and delivered well by Shawn Ashmore (Iceman from the X-Men films) and Aidan Gillen (Little Finger from Game of Thrones) respectively. Most of the cast’s roles roll over into both the gameplay and live-action show segments of the game and thanks to modern technology, everything looks so similar now that its barely even any sort of jarring experience to move from live action to the in-engine stuff.

From a technological and presentation standpoint, Quantum Break wants to be a showpiece for the Xbox One but the visual quality of the game is varied and sometimes depends on what’s going on. On one hand the levels are packed with detail and the art, lighting and character models are impressive in many ways, not to mention just how incredible all the time effects look, especially when combined with an awesome physics system that really plays well with the cool time powers. 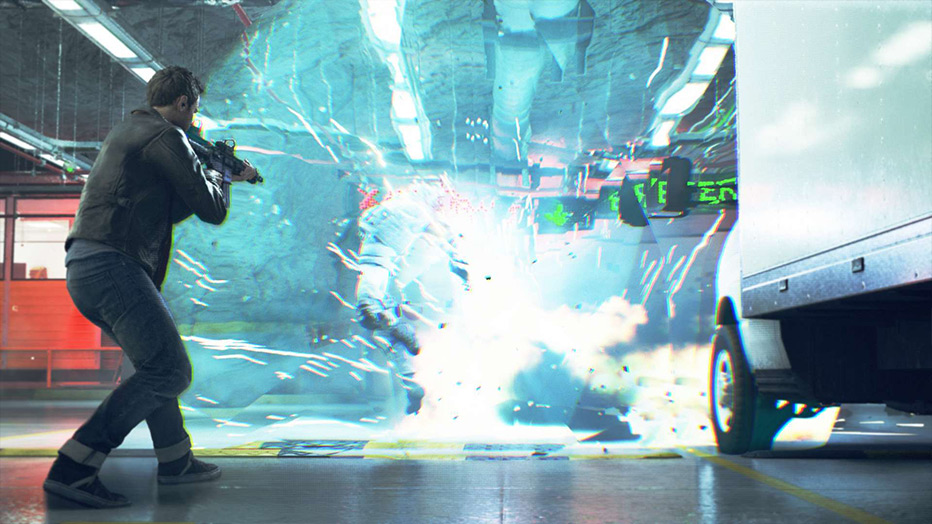 On the other hand there as some really strange motion blur effects and the image looks muddy a lot of the time due to a low resolution. The effects applied to try and clean it up don’t do quite as good as job as you would hope, often… and very strangely even making the picture quality look… I’d have to say speckled, and have the same effect as a video that’s running with a lot of compression on it. Again, the overall package is still really impressive and its still evident when you struggle to determine if a something you’re watching is running in real time or as pre-rendered video. I still can’t help but feel like I wished it was running the sort of crisp visuals that the PC version will undoubtedly be able to provide.

It’s a trade-off and in the end its still a great looking game but not quite the full package that raises the Xbox One up and says “I’ll bet you didn’t think it could handle something like this” in the same ways that something like Rise of the Tomb Raider does.

Our protagonist, Jack Joyce develops incredibly fun, satisfying time-based powers that give you all sorts of fun and interesting ways to decimate your foes, including the ability to slow time down, move around really fast or deflect bullets. The action is frantic and incredibly cool to look at and despite having an automatic cover system that works whenever you get near something, I always found myself opting to combo together a bunch of my powers in a dizzying feat of super-powered bad-assery rather than take cover, unless all my powers were cooling down or I was playing on the hard difficulty.

As a result, the action sequences feel like they pull off a superhero experience better than most superhero games I’ve played (I really want a game for The Flash after playing this), and it put a smile on my face time after time. It’s just a shame then that it feels like the action segments could’ve made up just a bit more of the game’s campaign. 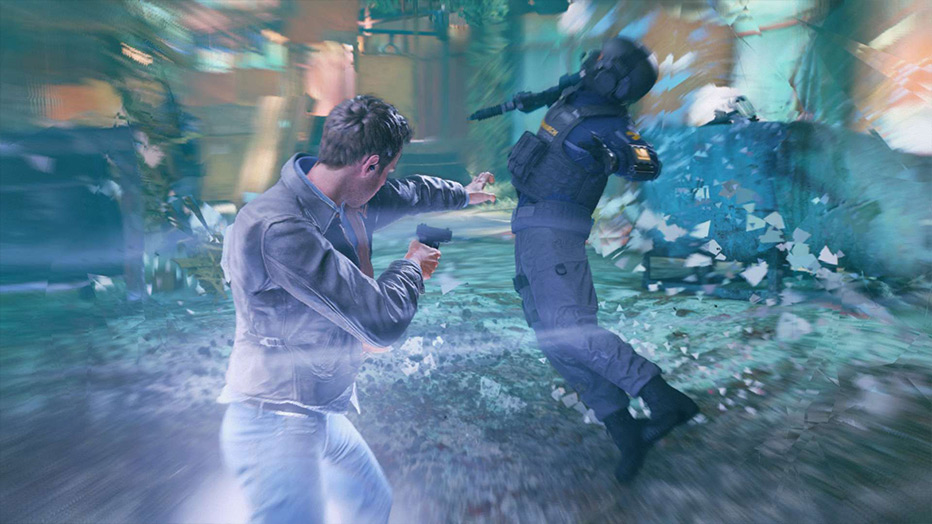 The other part of the gameplay that ties in heavily with what I’m about to discuss just below, is that you are also treated to some magical set-pieces that have you caught in time “stutters”, allowing you to move freely about while the rest of the world is frozen. Some of these moments are just immensely cool and are equally as impressive from a visual standpoint. At times they work as areas that require investigation or allow for dialogue while others even work as puzzles that might need navigating.

That brings me onto the next prominent part of the Quantum Break experience… reading. Quantum Break is largely made up of sections that have you walking around, investigating items, talking to other people and reading a lot of information that you come across in the form of emails, articles and more.

It is however, designed that the characters will mention some important points as you click on an item or make your way through an area, so as to keep you somewhat in the loop but trust me on this one, you really need to take the time to work through all of the imagery, the level design and the information you read to really get the full picture that they are painting… and what a picture it is. 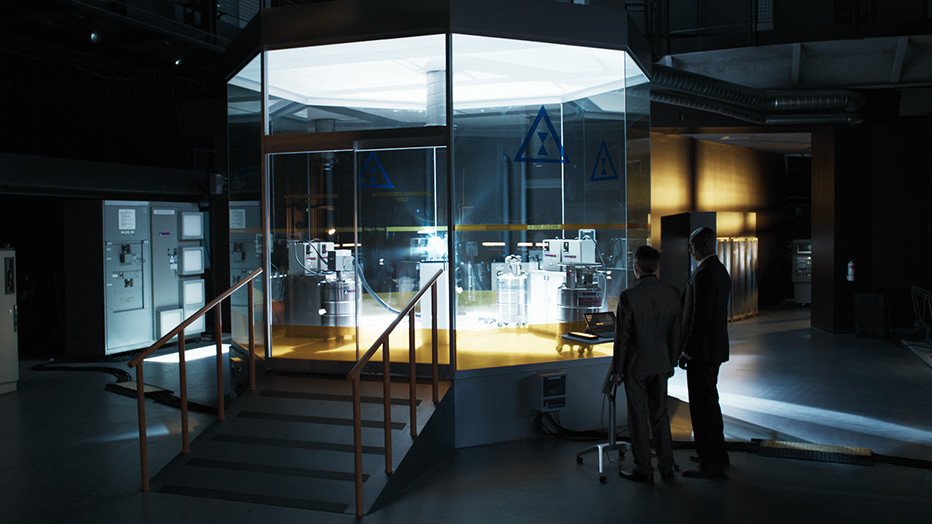 I struggle with what to make of it as the information and its slow release is both a part of the nature of the deep, complex story experience and yet at the same time it, like our protagonist, is able to slow time down to a complete halt and leave you feeling like you want to get on with it. More so when you have a character in the game standing next to you essentially moaning at you over and over to get going when you still have half a letter to read through. It’s as if a better solution was required to deliver the information, maybe in the form of voiceovers that you were able to listen to while exploring the rest of the area for collectibles or just ogling some of the incredibly level design. In short, it kills the pace pretty hard despite its value.

Don’t get me wrong though, it may not be ideal… but read it, read all of it. The more you immerse yourself, the better the story gets and you really don’t want to miss any of it. To get all of the content will pretty much require two play-throughs though, but I’ll get back to that in a bit.

The other way that you’ll be consuming the experience is through live-action TV show segments that (along with the game) change depending on some of your actions and decisions along the way and usually sit in between the game’s five acts. The episodes are pretty well made for the most part and the cast is good across the board, with a few exceptions here and there. It’s actually fitting that Lance Reddick has a big part in this as the story, mood and environment in Quantum Break actually felt closer to Fringe than anything else I can think of, and I mean that in a good way.