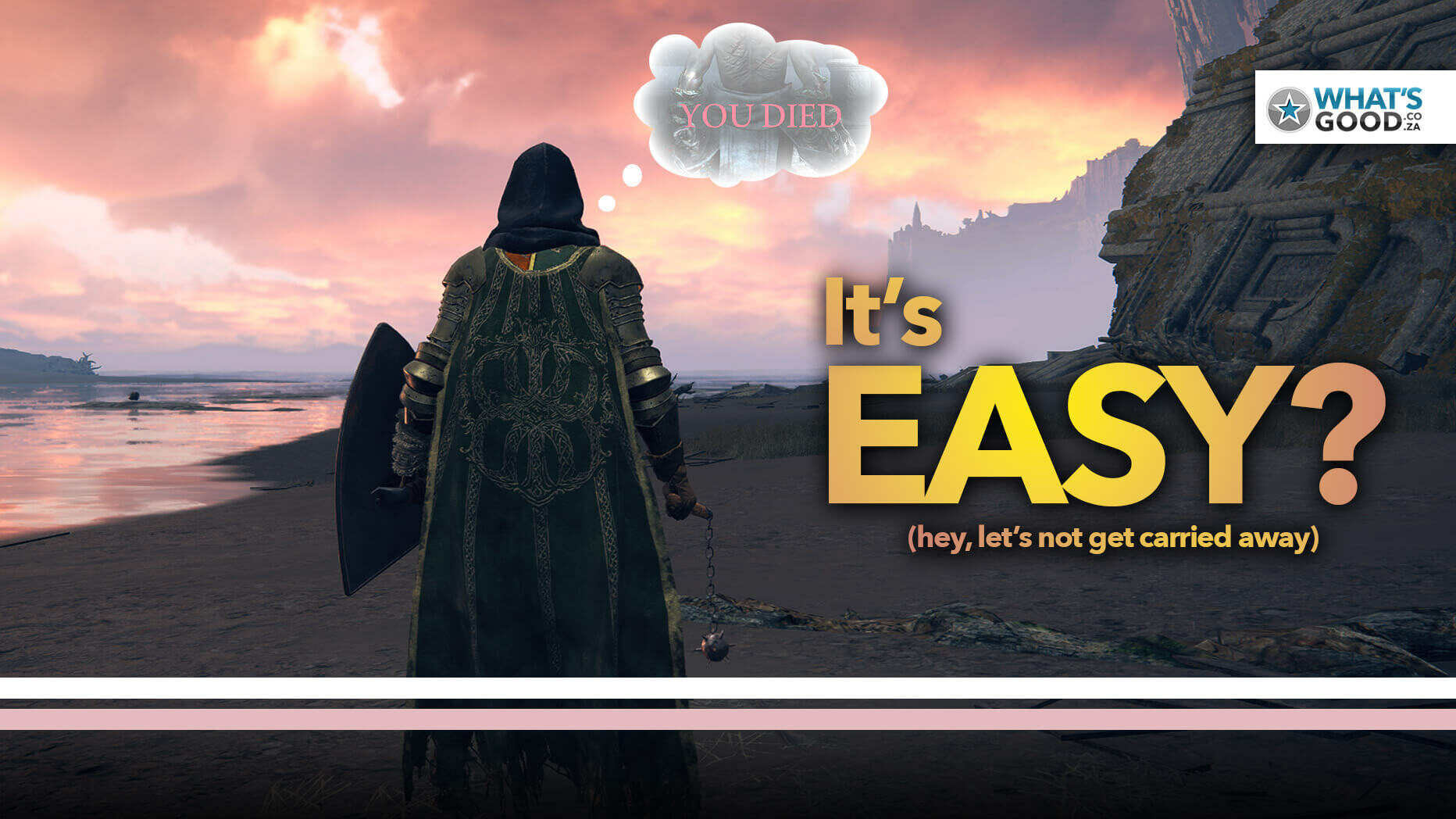 I truly believe that Elden Ring isn’t as hard as people say it is. Games like that are tough – make no mistake – but they aren’t without a ton of assists. The assists just aren’t structured and presented in a traditional way people expect. Elden Ring, even more so.

What maybe helps with this potential misconception is that the game loves being mysterious and vague about many elements of the game. It’s a part of the charm and adds a lot to the experience, but can also help the confusion along.

I initially avoided Dark Souls games like the plague because I thought I would hate them, based on everything I heard about the difficulty and toughness. I was very surprised to find that I felt very, very different (Read: I’m Pissed With Dark Souls Fans).

Early in the game, when you first enter the open world, you are presented with a beautiful open area, with one visible enemy. I call him “Horse Douchebag”.

“Okay”, you think to yourself, “Horse Douchebag must be the first enemy I should take on”, shortly before being pasted into the floor at record speed. This is the moment where two lines of thinking take place, and where the confusion may set in. You either think to yourself, “I can’t believe I need to fight this guy for eternity until I’m good enough to beat him” (you aren’t), or you come to the conclusion which is a big part of how this game works, and realise that you need to avoid this dude like the plague, and maybe come back later.

Since starting the game, I’ve explored for 12-14 hours or so, I’ve levelled up, I’ve beaten many bosses and felt really good about myself. I decided last night that it’s time to go back to Horse Douchebag and finally tell him who his mother is, and was shortly pummelled into the floor so hard that I ran away with my tail between my legs after a few attempts. 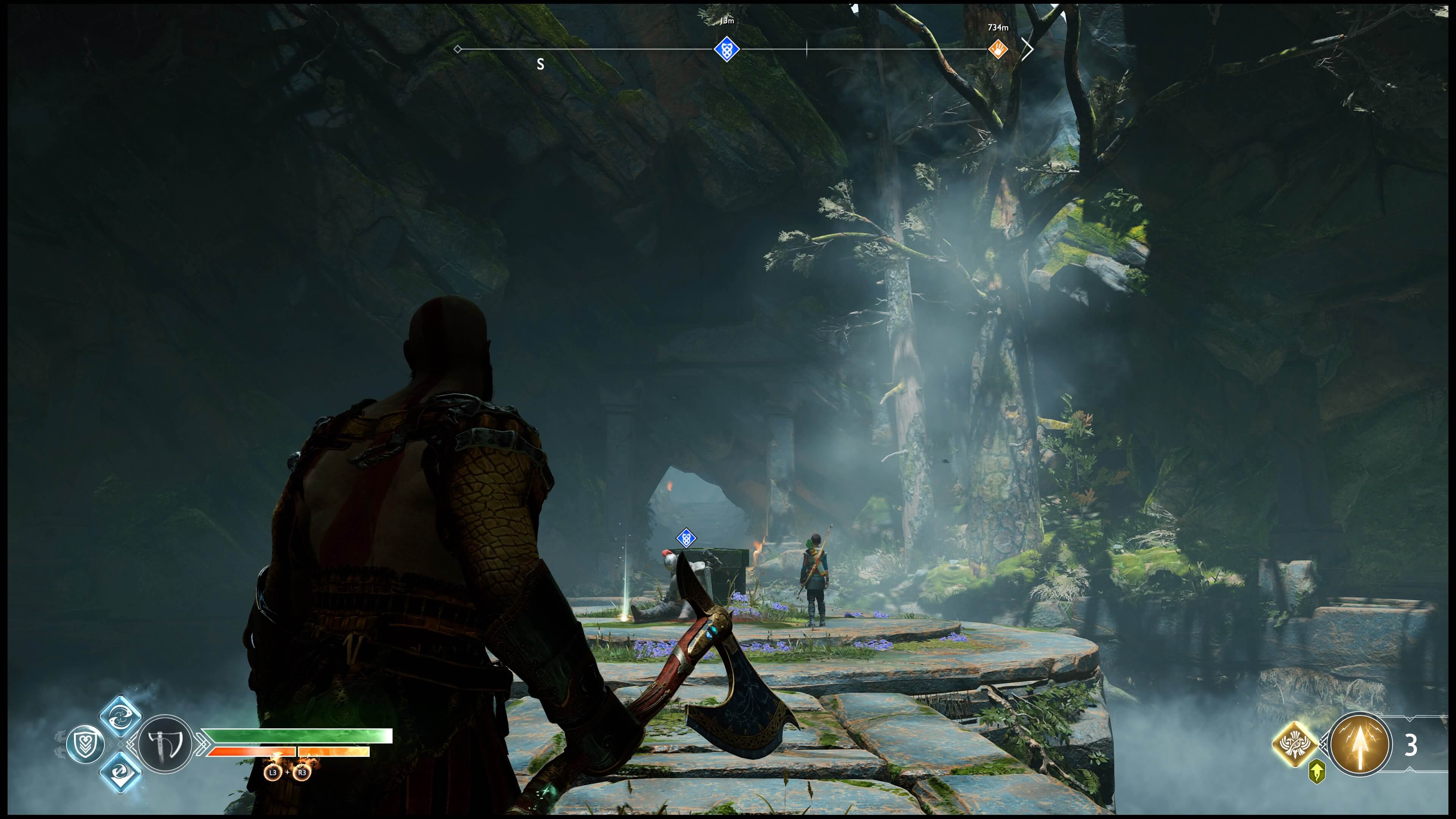 It’s All a Part of the Plan

This is the process, this is the way. Many early enemies that needed my heavy attention are now being dispatched with relative ease, even in groups. Respect is still necessary though, because they will put you in your place if you disrespect smaller enemies too much. I

It’s actually quite a shift for a FROM SOFTWARE game to be able to handle general enemies with relative ease early in the game, when playing both Bloodborne and Dark Souls 3 (even when I played the Nioh demo), early individual enemies had to be tackled VERY carefully, one by one, or you died very fast.

People who played God of War or Star Wars Jedi: Fallen Order have actually had a taste of the “Soulsborne” experience, as they are both modified, more accessible, approachable versions of the formula (Fallen Order was actually pretty tough, all things considered) that taught you about not taking on more than you can chew, and sometimes running into an enemy that you just aren’t ready for.

I also can’t shake the feeling that the closest game I’ve played to Elden Ring is, in fact, Breath of the Wild. I found the combat in BOTW to actually be really difficult most of the time, with tough groups of enemies, and huge enemies that wrecked me with haste, and what was even worse is that my weapons could, and would, break often. Even Metroid Dread, which is possibly my 2021 GOTY, had similar encounters and bosses that forced me to learn patterns, ultimately making a boss that was seemingly impossible eat the dirt just 15 minutes later.

It’s pattern recognition and exploitation, something that’s been around since the start of gaming. If you just don’t like stuff like that, then that’s fine, but it’s nothing new. If you don’t believe me, watch this:

Yes, so back to Elden Ring. You’re in a world where you’re stronger than some, and weaker than many. The thrill of the adventure is knowing you are moving around areas where you might get destroyed, but also finding those victories that make you feel so good. You’ll find many enemies that you just can’t take on, only to come back later when both you AND your character have gained experience, and you’ll paint the wall with them. The feeling of reward is immense.

Easy vs Hard – Which is it?

Okay, but what about this ongoing argument of “git gud” vs adding an easy mode for people to enjoy. The truth is that the assists are there, but as I mentioned earlier they don’t look like you might expect them to look.

This is a game where, sure, you can lose all your runes/currency by dying, but you still get a chance to run back and do a drive-by pickup to get them back most the time. This is a game where you don’t have limited lives to fight a boss, but instead can take them on as many times as you like – and in most cases leave and come back later, especially with optional ones. It’s a game where your weapons don’t break.

This is a game that lets you summon an entire extra player into the game to help you fight a boss, or use “spirit ashes” to summon up creatures or enemy-types that fight for you. On the first major-major boss, Margit, whose name you might see a lot on Twitter, you can even purchase something called Margit’s Shackle, which “Briefly binds Margit to the ground, allowing you to get a few free swings in. Can only be used twice per fight, and only in the first phase (before he pulls out his giant hammer)”.

This is a game that’s also offered such a fun open world to explore, that leaving a tough enemy behind to go explore and level up doesn’t feel like a chore, but a joy.

Does it deserve an easy mode? Well, many would argue that an easier difficulty level would kill the point of the game, and without that difficulty the game might actually be kinda… boring, especially when so many assists are actually already in place. Should every game just have an easy mode, just because? Some argue yes, because it hurts no one. Others might argue that the developers are trying to deliver a finely tuned experience.

Breath of the Wild didn’t have difficulty levels – just saying.

Is it sufficiently accessible to disable gamers? That’s a different conversation, about an area that gaming is really improving lately but still has a long way to go. Should a game be easy? Not necessarily, but I do believe everyone should at least have the means to play it effectively to take on that challenge.

So Is It For You?

In conclusion, Elden Ring doesn’t sound like a game that’s telling you to just get good, and deal with it. It’s just not a game that offers up a traditional easy setting at the start, but the options and assists are there, and plentiful.

It just asks for some patience, and if that’s not your jam, then that’s fine. For everyone else thinking of giving it a go, I won’t say you should avoid it, I just think you should understand what you’re getting yourself into. A game like Elden Ring could really benefit from having a demo or a trial period to let people give it a go and decide for themselves before continuing, it’s a big ask to spend full price on something that you don’t know if you will sink 80+ hours into, or give up on in 80 minutes.

It’s a special experience, and once it clicks, there’s nothing like it.

PS: Our very own @Kelly Stretch is playing a Soulsborne game for the first time, and documenting it on Twitter – if you want to follow, you can check it out here.