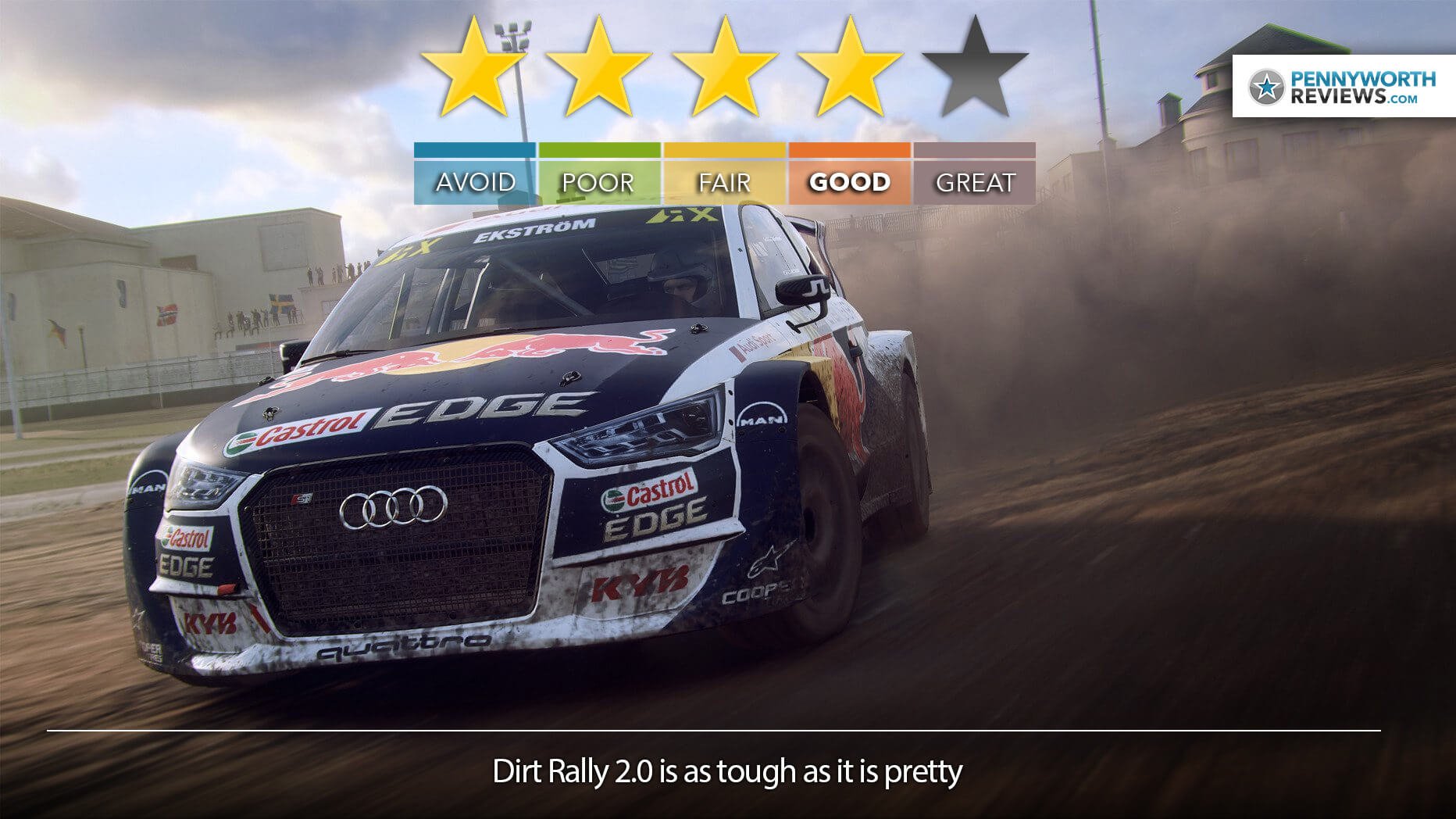 Dirt Rally 2.0 is as tough as it is pretty

Summary 4.0 Great
Gameplay 5
Quality 5
Experience 4
Value 4
Summary rating from 1 user's marks. You can set own marks for this article - just click on stars above and press "Accept".
Accept
Summary 4.5 Great

Dirt Rally 2.0 Review – Not For Casuals

What is it? A realistic Rally sim and the official game of the FIA World Rallycross Championship. You spend most of your time barreling through perilous paths against the clock while a navigator shouts directions at you, or racing alongside other cars on mixed-surface tracks.

Verdict: A gorgeous, excellent rally sim that’s not for the casual gamer.

Reviewed on: PS4 | Also available on Xbox One, PC

I was so impressed with my first impressions of Dirt Rally 2.0, especially how beautifully made it was – from the menus, to music, graphics and sound. Games this “sim” don’t usually have this much polish packed in. It should be noted that I have not played the previous Dirt Rally (I did review Dirt 4 here though).

My first couple of outings felt really great too, despite the game humbling me very quickly, and forcing me to put my big boy pants on to try and do better. The problem I have is that over time, I found myself having a little less fun as I struggled to get through stages without multiple incidents that just seemed too easy to come way too easily. Without flashbacks (and only 5 restarts allowed per event), that’s a pretty tall order for someone sitting on a couch with a controller (of course more suited to the die-hard rally fan in a wheel setup). The navigations are excellent and clear though, and a nice improvement over Dirt 4.

It’s supposed to be a sim, but assists didn’t help much and it feels like some extra features could have been added to make it a little more manageable for mid-to-casual fans. Upon doing some research, I found that a fair amount of Dirt Rally fans said they’re rather going back to the first game for now, in the hopes that some changes would be patched in to make it a bit more manageable.

Instead of procedurally generated tracks like Dirt 4 had, this goes back to properly crafted courses (and Rallycross tracks look solid too), and while they might get repetitive a bit fast, I prefer the amount of detail and polish that can be found in each one of them. While I fully respect Dirt Rally 2.0’s dedication to hardcore fans, I just don’t see any good reason why they couldn’t have made certain aspects of it optional to appeal to more casual gamers as well.

While there’s a lot to love about Dirt Rally 2.0, it’s not for casual fans or even many race fans and seems to have some handling issues I can’t seem to figure out. If you’re a die-hard rally sim fan, this is up there with the best.