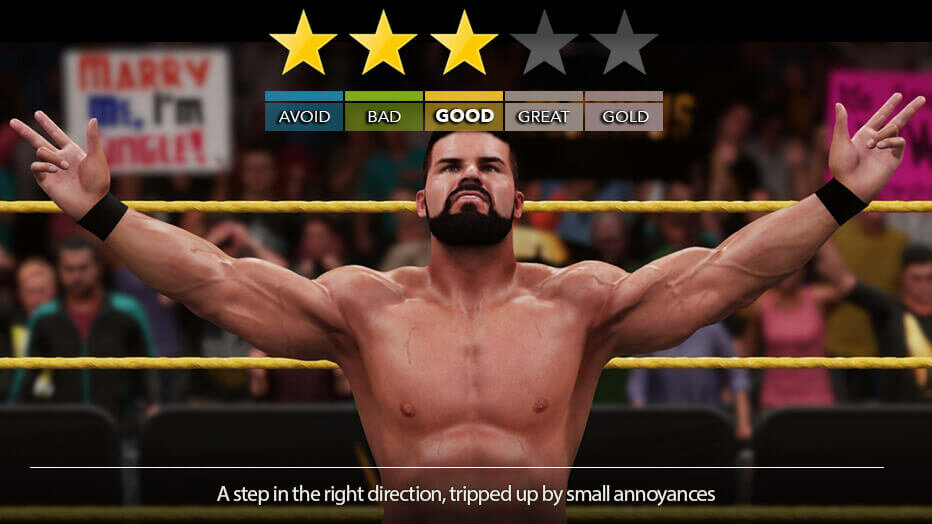 Is this the real life? Is this just fantasy. Caught in a choke hold. No escape from reality

Summary 3.0 Good
Gameplay 4
Quality 4
Experience 3
Value 4
Summary rating from 1 user's marks. You can set own marks for this article - just click on stars above and press "Accept".
Accept
Summary 3.8 Good

What is it? The latest iteration in 2K’s WWE video game series aiming to bring the hottest wrasslin’ action straight to your living room… Or bedroom… Or Mancave… Or Ladycave (phrasing) – wherever it may be you spend your hours gaming – Reviewed on PlayStation 4

Verdict: A step in the right direction, tripped up by small annoyances, WWE 2K18 is only patch or two away from being…. Wait for it… GLORIOUS!

With nearly 200 superstars, dozens of match types, an improved graphics engine, and also the hopes and dreams of a few million fans on its shoulders, does WWE 2K18 live up to the hype? Well…

Right off the bat (or ropes, as it would be), WWE 2K18 is a solid 4 star game hampered down by the dumbest of things which can (and probably will, if history is any indication) be smoothed over with a hefty patch or two.  Some people have reported a large list of near game breaking (albeit hilarious) bugs, but with the mind-boggling amount of matches I’ve played, the only thing I can complain about is the frame drop in some 8 man matches, and how iffy the game is about registering counters and kick outs. If you aren’t 70’s Jonathan Travolta with fingers made of greased lightning, you’re going to be taking more than you’re giving.

The series continues in the right direction, though, improving on the previous year’s entry in many ways, such as a greatly improved graphics engine, which results in the best looking wrasslin’ game ever, and the gameplay has been tweaked to have matches feel more like the game’s real-life counterpart. Wres – sorry, “Superstars” react more naturally to bumps as well as their environment – grimacing in pain, using the ropes to help themselves up, rolling out the ring etc. But, I will say this: the game isn’t very welcoming to new comers or casual players. If you’ve played the last 2 games at least, you’ll find that matches have a nice back and forth feel to them, making you balance your stamina, reversals and other such moves as you try to win, but for those wanting to pick-up and play, the technicality might be off-putting.

Then there’s the boring MyCareer mode, where you take your created wrest – “superstar” from a rookie to decorated main eventer, but the improved RPG-like mechanics, backstage free roam, and greatly refined creation suite (which was already ridiculously in-depth) doesn’t save this mode from being completely ignorable… And let’s not even talk about many moves and items being locked behind loot crates you buy with in-game currency.

If you want your story fix, WWE Universe mode allows you to play GM, setting up (and playing) matches/shows/feuds/championships and more. Shinsuke Nakamura Vs. AJ Styles for the WWE title at Wrestlemania? You can do it. Eddie Guerrero Vs. Shawn Michaels in a ladder match for the WWE Undisputed championship at Summerslam? You. Can. Do. It.

Ultimately, WWE 2K18 is a continued step in the right direction for the franchise. It’s a pretty fun game to play and well worth your attention, but… Maybe wait for a patch or two to work out some of these kinks before picking it up.