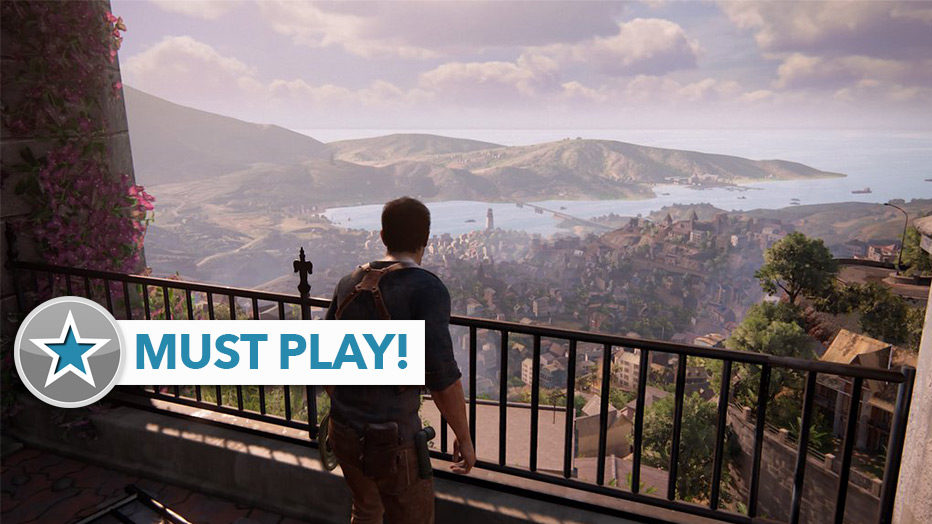 This huge, impressive, fun but touching finale to the Nathan Drake story delivers in spades as a true must-own title for this generation

What is it? The 4th (5th if you count the PS Vita title) and final chapter in the highly cinematic adventures of Nathan Drake and his cohorts as they travel the world shooting things, climbing things and solving things while finding lost cities and priceless treasures. This time, Nathan’s long-dead brother turns out to be not so dead, and he needs Nate’s help to save his bacon by discovering a huge treasure left behind by pirates centuries before.

Uncharted 4 is unbelievable. I don’t mean unbelievable like “good” or “amazing”… I mean unbelievable, like I couldn’t accept what was happening in front of my eyes during my entire play through. To say that this is a great looking game is an understatement as it’s easily the best looking console game of all time and still possibly one of the best looking games ever made, on anything. It is fully comparable to some of the better looking pre-rendered animated movies from the past decade, but running in real-time. Throw in Naughty Dog’s knack for cinematic direction, story telling and some of the most breathtaking set pieces you’ve ever seen and you have yourself an astonishing experience before any of the gameplay is even taken into account. What’s more, there is a photo mode built into the game, and when you see the sorts of detailed environments you are going to see, you’re going to be tempted to spend as much time taking photos as you will spend playing the game.

Compared to previous games, Uncharted 4 has been created as a giant finale that catches up with Drake a while after he has thrown in the towel on his thieving, adventuring ways, and functions as a send-off, managing to be an all-star “best of” of its own franchise, often giving nods to some fan-favourite sections or experiences from previous games while also unveiling more of the Drakes’ origins. It wants to remind you where you’ve been, what you’ve done and how far we’ve all come together with these loveable characters and their antics.

Uncharted 4 is a milestone moment, and one I’ll likely never forget. It feels like there’s an edge that we have been approaching for a long time, and its taken us over.

With this slightly different concept in mind, the gameplay is often very different depending on where in the game you are, and takes a different approach to pacing, exchanging a constant barrage of gunfire for way more adventuring, climbing, exploring and character building. The shooter sections are still around though, they just aren’t the focus, to the point that you may sometimes play up to nearly 2 hours without firing a weapon, but they still offer up plenty of action when necessary, that is of course, unless you want to pursue a more stealthy approach more of the time.

There are also all-new vehicle sections including some off-roading and some boating, with some giving you access to massive open areas that give an almost open-world flavour to their segments. The game employs what Naughty Dog calls a “wide linear” approach to the level design, meaning that even if your goal is always the same, you are almost always offered a variety of ways to get there, so its up to you if you’re going to swing across a chasm, climb a large cliff or just take a side path – and it’s actually a great addition to the experience and one that adds so much more to the experience, adventuring, loot hunting and re-playability of the game.

As said before, the various gameplay segments are a bit of a best-of that do suffer slightly from a jack-of-all-trades issue where as a whole its good, but the individual aspects such as gunplay and melee combat aren’t all as good as they were in the focused games. If you want more of the action, don’t forget that despite creating an immense highly re-playable 15-20 hour campaign, there’s still an entire multiplayer component to dive into. No, I don’t understand how they fitted that in on top of all this either.

A small portion of this review needs to be solely dedicated to applauding Naughty Dog for creating something that is so special that I still can’t even believe it happened. Uncharted 4 is so beautiful, so detailed and of such a high quality that it made me want to travel back in time to my 8-year old self so that I could grab him by the arm, shaking him violently and say “This is it! That moment in the future you always thought about when you would play something that was just so impressive, so realistic looking at times and so mind-blowing that you wouldn’t be able to comprehend it. It happened, I’ve seen it little 8 year old Nick… I’ve seen it and it’s glorious!”. I often laughed out loud whilst playing the game… out of nothing more than disbelief, it was so beautiful, but how… how this runs on a Playstation 4 is beyond me, and it’s beyond other developers that will be lucky to have games looking this good by the end of the PS4s normal generation run.

Uncharted 4 is a milestone moment, and one I’ll likely never forget. It feels like there’s an edge that we have been approaching for a long time, and its taken us over. Then again, Uncharted 2 almost felt similar in its day, Uncharted 3 was gorgeous and The Last of Us had me wondering how Naughty Dog got a PS4 game to run on a PS3. Even with such a high bar set, I’ve been blown away with a game that is not only a technical achievement, but a game that carefully wraps up the franchise we all love. It’s not afraid to slow things right down to touch on the special moments that make this beloved franchise so special and end it all off with a neat little bow on top.

Verdict: This is without a doubt the game to own if you have a Playstation 4. Don’t miss it, and if thanks to the HD collection, you have no excuses to avoid diving into one of the best modern video game franchises in existence.