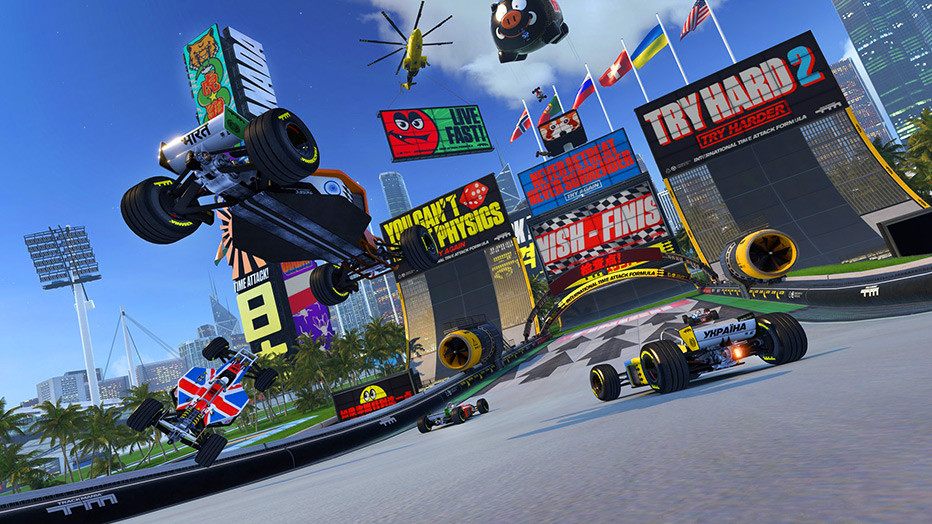 Fast, fun and arcadey to the core

What is it? An over the top arcade styled time-trial game that has you drifting, ramping and loop the looping across a variety of crazy and inventive levels with the goal of trying to beat the fastest times.

Trackmania games have been around for a while on the PC now, and those who know them know what brand of fun they offer up. Many console games might be more familiar with games like Trials and how they require you to navigate levels and beat the set times. This is a similar idea, except that instead of leaning and wheeling, its about breakneck speeds and stuntman-like setups (the rollercoaster levels left my eyeballs spinning). It’s easy to pick up, it’s fun and it has a great arcade aesthetic to boot.

There are a variety of modes ranging from a career mode with set tracks and times to beat, and there’s a ton of them that span across 4 different vehicles on road and off over multiple locations. The multiplayer modes might be where most people dig in, as they pit you against entire lobbies of people all trying to set the best timed within a limited timeframe and it can be a lot of fun gunning for the top. There’s also an easy to use track builder that allows people to create tracks and challenges with ease, and the customisation and community will definitely be a big part of the games ability to last, as there are also modes to take on those challenges or challenge friends to see who is best.

Trackmania Turbo is a load of fun that’s really easy to pop into and enjoy and while its price is set somewhere between the price of full AAA games and “arcade” titles, it still feels like it needed to lean more to the latter, as the fun might wear a bit thin for some after not too long and I think more people will drop money on this sort of burst action if it was slightly on the cheaper side.

Verdict: Fun, fast and accessible but should have maybe been priced like a normal “arcade” title.