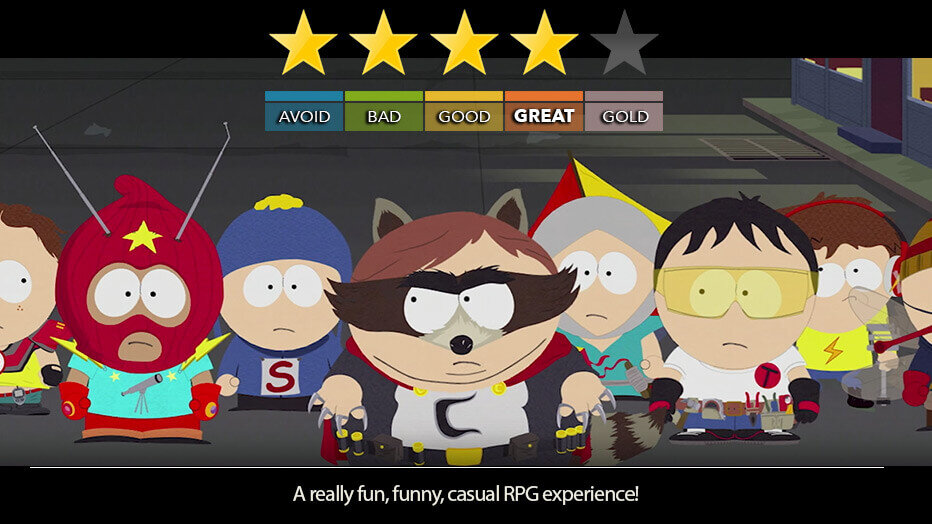 It’s like the cartoon, but you can control it!

What is it? A 2D adventure role-playing game with turn-based combat based on the controversial and often hilarious adult cartoon show, South Park. – Reviewed on Playstation 4

Reviewer’s note: I have not played South Park: The Stick of Truth, so this review is through completely fresh eyes and despite always enjoying South Park I’ve not watched much of it in years. Even then I only watched it on and off, so this is a fairly neutral take from neither a huge fan or a hater of the show.

Let’s just get something out of the way… South Park is like 20 seasons in, and if your general outlook on the show is that its tone-deaf, unfunny, offensive or otherwise… you can go now, because it’s not going to change your mind. Ignoring this game would be a damn shame though, because for fans and even those who don’t have any issues with the show’s humour, South Park offers up not only a good South Park game, but a really good entry-level RPG experience!

My time with South Park: The Fractured But Whole has been nothing but enjoyable, and as mentioned above I really and truly believe that this game is an excellent starting point for anyone who has ever wanted to give a turn-based RPG a go. In fact, I find it a little sad that its an adult-focused franchise, as I think this same system with other familiar characters would be an excellent game for a younger audience. While the story continues on from the end of Stick of Truth, and revolves around you joining Cartman’s new Superhero team in a war of popularity and Netflix deals; most of the gameplay consists of you travelling around South Park, fighting all sorts of enemies ranging from young girls to drunk rednecks while upgrading your gear, crafting items and finding cool new outfits along the way.

South Park wouldn’t be South Park without its iconic brand of humour that pokes fun at just about every hot topic, and this time around it focuses a lot on contemporary themes such as gender identity while also bringing in some of their old favourites. The game is chock full of main quests, side quests, collectables and puzzles that aren’t really all that challenging, but offer a fun gameplay experience. The characters in your group have a variety of familiar superhero-like powers, and all offer unique play styles, and while South Park’s animation style is so basic, I was actually impressed by just how powerful and grand the character powers felt when using them.

In the end, I never found myself feeling taxed by the experience, and instead was able to simply enjoy a great time with a casual RPG experience that had me laugh out loud on many occasions. If I must be honest, some of its takes on kids’ imaginations and how they use it to deal with their real world issues really warmed my heart!

CAUTION: TRAILER IS NOT NFSW