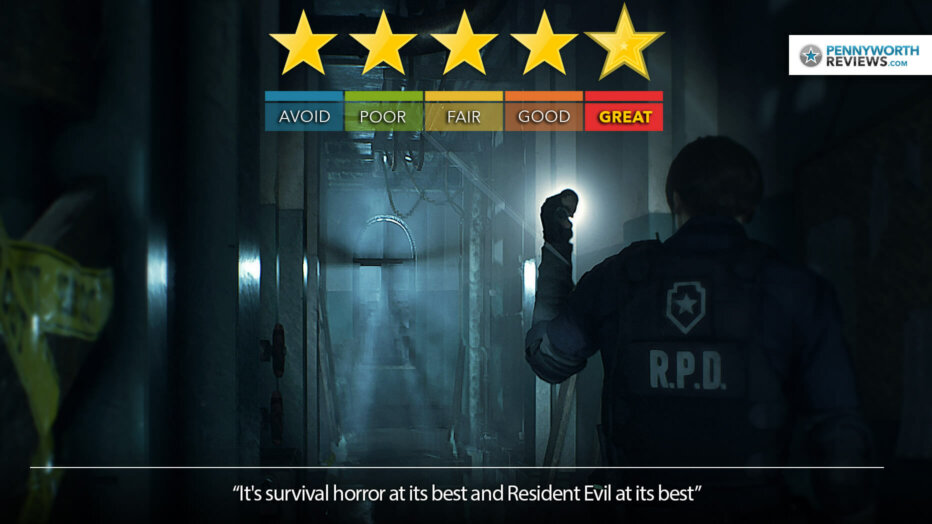 What is it? A complete remake of a great 1998 survival horror, now played in a third-person over-shoulder view. A rookie cop and a young woman looking for her brother must brave a Zombie infested police station after an outbreak leaves them holed up in a police station. – Reviewed on PS4 Pro. Also available on Xbox One and PC.

Cons: May genuinely be too scary for some, especially with headphones. Would have been cool if both characters had completely unique campaigns.

It’s hard to believe that it’s really been over two decades since the original Resident Evil 2 thrilled us on our Playstations, and wow does this game just celebrate its greatness in the best way possible.

Like the original, the game is meant to be played as the one character first, and then replayed on a “B” playthrough with the other character with most of the campaign being the same, but some differences chucked in and the ability to see extra endings (it even comes with free, additional post-launch content).

RE2 is a complete remake, that means a new gameplay style and in a stroke of genius, a complete remix of the story and campaign that remixes the way the game plays out to be completely enthralling to newcomers, but also breathe new life into a game that fans are so familiar with. This is a 100% true return to form. It’s survival horror at its best and Resident Evil at its best – with excellent game design that always keeps you feeling capable but vulnerable, with enemies and monsters that compliment each other and always give you new challenges.

This game is super scary though, and that’s no joke. When playing in the dark with headphones on, this game is terrifying, all thanks to an incredible combination of masterful visual, audio and gameplay design. The environments are just so beautiful, except in a way that’ll keep the hair standing up on your neck. It keeps you guessing, and fans of the original who thought they know when and where the scares are gonna happen are probably worse off than the newcomers.

I really, really (really) hope that this peek into how an old game can be cleverly and masterfully remade is going to catch on in a way that sparks other great franchises like Silent Hill and others to pull it off.