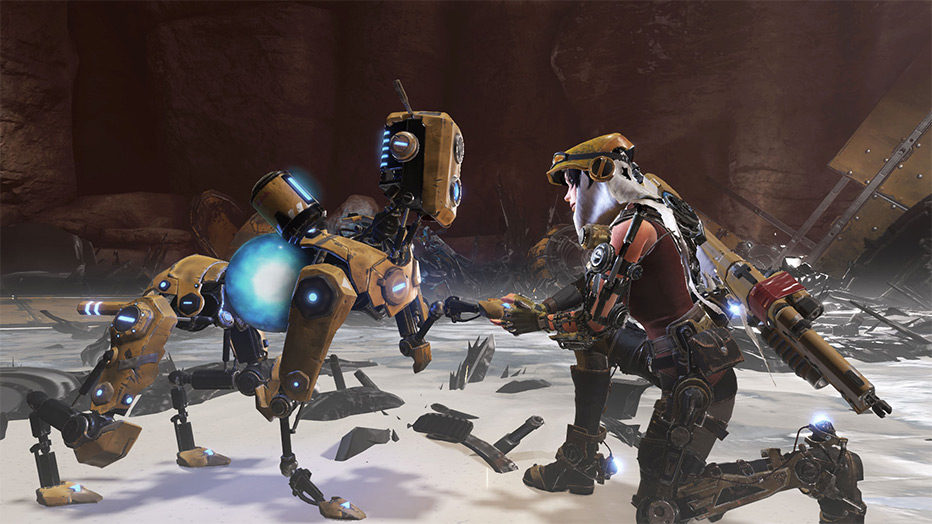 What is it? ReCore is a post-apocalyptic adventure game following the tale of Joule, a mechanic that awakes on Far Eden, a planet that was destined to be humanity’s escape from Earth and new hope, only to discover that the planet is in ruins and all of the planning that went into making the new planet habitable has gone awry. We follow Joule as she discovers what exactly happened to this world and the other colonists that she was with. She has a number of robot companions called Corebots that help her on her journey.

Nostalgia is a powerful thing. We think back to the glory days of gaming with rose-tinted glasses and fond remembrance for an era long past. Modern games have developed their own personalities and sensibilities and the old ways of gaming are pretty much confined to the ethos of yesteryear. However, sometimes we get reminded of this time past with games that lend their personalities heavily to retro design, but like in the case of ReCore, they don’t capture the Golden Age quite as well as you would have hoped.

ReCore’s story is equal parts intriguing and boring. At one end, you have this interesting world and events that transpired within that world which grabs your attention, but on the other end we have lacklustre characters and a tale riddled with clichés. It’s incredible just how much of a disconnect there is. Joule, the game’s protagonist, barely passes the mark of being an interesting character while a lot of the personality is put into the various robot companions, called Corebots, she manages to recruit. The Corebots are charming and you feel more emotion towards them than the main characters of the game.

The gameplay is equally a mixed bag. You shoot at enemy robots using a very simple lock-on system and the only variation you get is that the enemies are different colours that correspond to different ammo types. It gets stale pretty fast and combat feels like a chore in the later parts of the game. There is also a huge focus on platforming, but it can only really be considered passable at the most and has an almost utilitarian feel. You get more abilities to make the platforming more varied, but it doesn’t detract from how monotonous it gets.

The game has a distinct Metroidvania feel to it. You need to get new abilities in order to get to different areas and the game has a sizable open-world. There’s a whole bunch of dungeons within the world that allow you to test your skill and get more loot to use to upgrade your Corebots. This is possibly the game’s biggest strength. There’s a sizable amount of content to keep you playing for a while, but the problem is that you probably don’t want to.

At a technical level, the game is a mess. The loading times are so long that they are egregious. Upon death, it would take 2 minutes before you load back in. During transitions or fast travel, it takes over a minute. The visuals, while pretty in their own way, are hampered by the inconsistent framerate and pop-ins that occur on a frequent basis.

ReCore has a common theme between all of its elements. They’re passable, workable, average and competent. There is nothing outstanding about this game, nothing to look at and say “that’s special and interesting”. It’s a game composed of a lot of inferior moving parts and tacked on features that makes it ultimately forgettable.

Verdict: In ReCore’s attempt to capture gaming’s pervious accomplishments, it failed to create its own personality and be a fun experience.