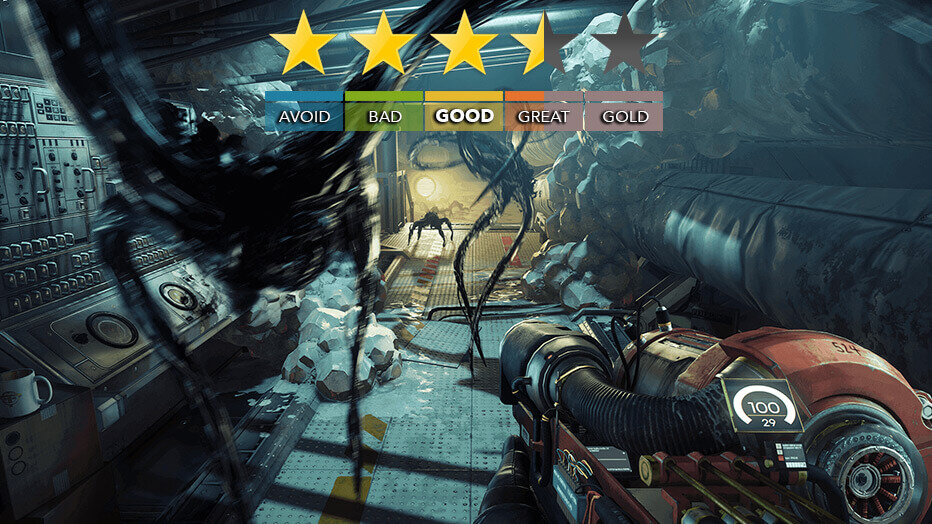 What is it? A slower paced immersive single player sci-fi first-person experience that contains elements of action, discovery and some light horror/thriller themes as you find yourself stuck aboard a space facility where some experiments with alien organisms have gone awry. Think Gone Home‘s discovery meets Deus Ex‘s ability-driven problem solving, with a hint of Alien Isolation and a dash of Bioshock. – Reviewed on Playstation 4.

Verdict: Immersive and intriguing – By slowing the game right down and also keeping the scarier elements to a very manageable level, Prey encourages you to take your time and enjoy all the details, while also giving you the freedom to approach your problems in a variety of different ways.

Leading up to the release of Prey, I kept hearing that words “Bioshock in space”, and anyone who knows a little bit about anything knows that Bioshock was already a bit of a spirtitual successor to System Shock – and well, despite never playing one, it’s clear that this is way more of a nod to that. In fact, it’s actually got very little in common with Bioshock beyond a few similarities as I found it to be way closed to the emergent gameplay of Deus Ex that encourages you to make your own path depending on what abilities you’ve unlocked. The game might involve some alien creatures that can at some time make your heart jump out of your chest (mostly because some of them can mimic basic objects and get the jump on you), but hey, you get to start doing that too a little into the game and it’s a pretty good time depending on how you make use of it.

The pace of the game is slow however, but I mean it in a good way – especially if you are in the mood of something a little more methodical. You take your time carefully moving around, avoiding trouble with the nasties while reading emails and discovering notes and voice logs that essentially convey a lot of the story of what exactly went on in the station and breathing life into the characters that did (and some that still do) inhabit it. Enemies are tough throughout though, and even though you developer abilities over time that range from morphing into objects, delivering devestating psychic blasts and even being able to spot Mimics, the game always keeps you honest and in most cases, avoidance is better than engaging, but its a nice blend of both and weapons such as the GLOO cannon are able to be used as much for combat as they are for their ability to plug burst gas pipes or create steps to access hard to reach areas.

Thanks to a GENIUS little looting system that allows you to break down everything you find into some simple crafting materials, all of the rummaging and looting always feels like its worthwhile without ever becoming a time-wasting annoyance. In fact, the game has many little features that indicate that the developers are really big fans of the genre and had spent a lot of time over drinks and barbecues saying things like “you know what’s really annoying in games like these? Yeah, I’d fix it by doing X”. Quick examples? An excellent little quick save function that shows they understand the way players approach these games, the ability to pick up items even if your inventory is full with the use of an “overflow” that allows you to decide what to keep and what to drop rather than just telling you that you’ve run out of space and that great loot breakdown system I mentioned earlier. Things like that, and a few that I really hope other developers will steal.

I had some input lag issues at launch, but by a few patches in they had been resolved, and the framerate also has a few moments here and there that could have been better on the PS4, but if there was ever any gripe to be had its that moving between major areas requires a pretty hefty loading time on the Playstation 4, and while its not so bad in the beginning, later parts of the game really have you moving around a lot and the loading times become somewhat of an annoyance that had me scrolling through my phone’s Twitter feed a lot while waiting to get to the next area.

So while the game did start to drag a little later in, I really did enjoy my experience with Prey and thinks it’s most definitely worth checking out if you’re into something a bit more thinky and a little less shooty. I found myself intrigued with the setting and mechanics, and night after night I just couldn’t wait to jump in and find out what came next.