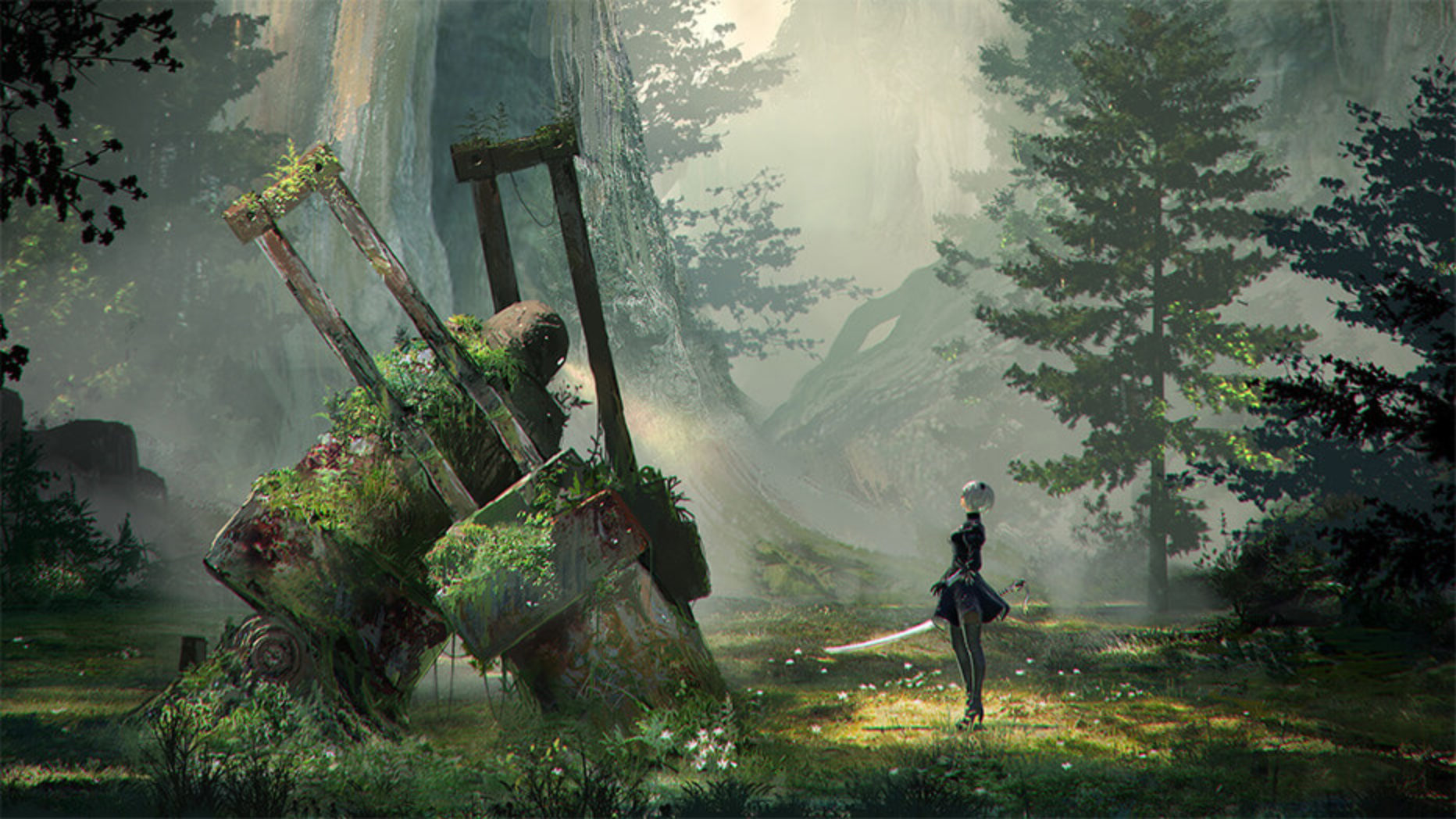 [Score: In Progress – Not Final]

What is it? A Japanese Anime-styled action/melee combat game that takes place in a far future where humans had to retreat to the moon after being owned by aliens, and now have an army of androids doing all the dirty work for them in the hopes that they can return. The game has you running and backtracking around a large map fighting enemy robots and performing a variety of open-world type missions alongside the main quests. The game often switches between various camera modes to provide different gameplay styles and experience, such as moving from 3rd Person to side-scrolling or even putting you in a mech/jet contraption and switching to Galaga-styled levels.

NieR: Automata is an interesting kind of game to me in that while I (and many others who are heaping on praise) think it’s good, I definitely hesitate to recommend it to to just anyone. The truth about NieR: Automata is that you need to know (and like) what you are getting into and then decide from there. So what do you need to know and like? Well you need to know that the combat was done by Platinum, which means that if you are a fan of the kick-assery found in games like Bayonetta then you would want to pay attention. It’s also got a very heavy Anime vibe (watch the gameplay trailer below to get a feel for it) and expects you to dig into its systems.

In short, you are either into this sort of thing or you aren’t. I sit somewhere in the middle.

That’s not the end of it though, because what you also need to know is that its not a focussed action game like Bayonetta, Ninja Gaiden or DMC… so it’s pretty different. It’s currently the sort of experience that I’ve decided to call a “single player MMO” in that you run around large, sometimes mostly empty spaces doing errand missions that really remind me of MMOs I’ve played, except that you’re doing it alone.

The first hour is a real cracker that blasts ahead and continually jumps between different view/play styles (which is awesome by the way), but then I found that the pace just took a HUGE dive, but I am happy to report that after a few more hours a few elements like quick travel opened up and allowed me to focus on more ass-kicking and less sprinting around. The game does have some super cool elements in it though, such as the fact that a pod that follows you around essentially allows you to shoot and fight hand-to-hand at the SAME DAMN TIME, and those with serious finger skills really do feel the benefits and feel really bad-ass thanks to a really great feeling combat system. The game has also been injected with some really great music and quite a crazy sense of scale, and the main missions can really be good fun as well as include some pretty awesome cutscenes. You can swear at me for saying this next bit if you want though, but in terms of the visuals it honestly feels more like an HD-remake of a PS3 game than a full blown PS4 titles, but at least it runs decently.

But for all that excitement, I again must bring up the “single player MMO” aspect. The fun combat can make a lot of the traversal feel worth it, but for the most part I just felt like I was racking up unnecessary play hours for nothing in particular. This is also odd considering that despite apparently sitting in the 25 hour plus range, the game is actually designed to be played more than once to fully experience everything – and I don’t just mean in the New Game + way. Multiple play-throughs are said to provide pretty significantly different experiences, so why pad it all with busy work? I’m not sure. There’s also a heck of a lot to grasp in terms of items, buying, upgrading and creating character load-outs to suit your style and the game even has a Diablo-esque system that requires you to get back to your body after you die to get back items.

I must really be honest to say that I really wasn’t feeling much love for NieR for the first 6 or so hours, I just couldn’t understand why people were praising it so much but after many hours more, I can truly say that while its still not a perfect game in my eyes, it has something special about. Still, if you are just looking for something fun and pretty that doesn’t require too much of you, you might wanna rather look in the direction of Horizon Zero Dawn (4.5 Stars) or Mass Effect: Andromeda (Review Soon) – but if you’re big into fast-paced action, tinkering with load-outs and crazy stories, then NieR: Automata is definitely worth looking into.