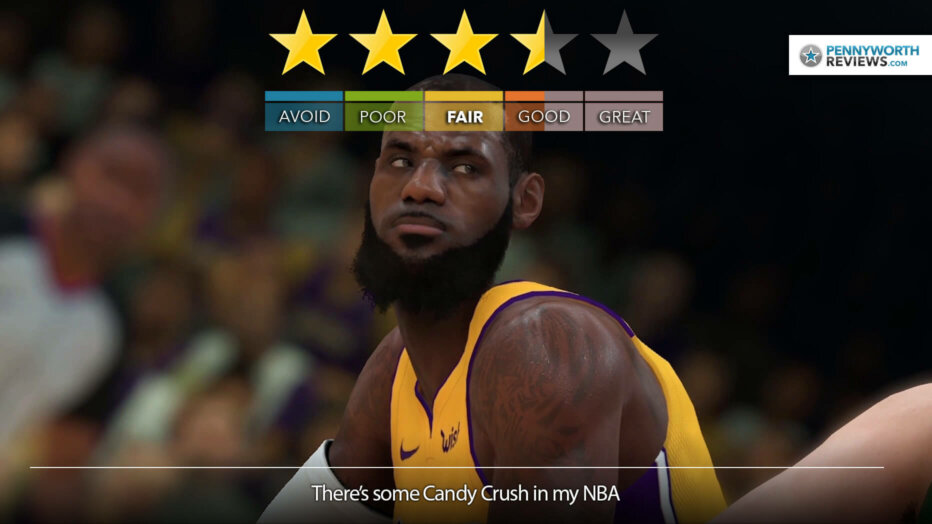 There’s some Candy Crush in my NBA

What is it? An annualised NBA sports game that includes a variety of modes ranging from a (now online) story-driven campaign to others that involve managing teams, collecting cards, playing as teams and more. – Reviewed on PS4 Pro. Also available on Xbox, PC

Verdict: Good, but willing to hurt gameplay in exchange for money.

NBA 2K games are starting to upset me, because the pursuit of money is ruining just how DAMN good these games are. The visuals are stunning, gameplay is excellent and the MyStory modes are a really great way to experience a sports game (not you 2K18). The various other modes in the game are excellent, you can play as your favourite teams, including incredible classics like the old Jordan-Pippin Bulls, there’s MyTeam modes and more – but when it comes to MyCareer, the main attraction couldn’t come across as more desperate.

The story was a little different this year and takes you through the experience of a young up-and-comer who doesn’t quite make the cut and has to play through some other leagues to try and prove that he belongs in the NBA. While it was a bit depressing at times, I liked that it was different, well directed and had some unexpectedly fun writing and performances from the semi star-studded cast. What I don’t like is that similar to last year, your character sucks unless you are willing to put serious grind hours in or… you guessed it, drop money on in-game currency. As a result, I managed to score 2… YES ONLY TWO points per game for 3 games in row playing in the NBA once the story had concluded because my character just simply didn’t belong. When I played in other modes with normal NBA players, they felt like they had superpowers compared to my player. The only thing quite as bad is the obnoxious use of sponsorships. “Turbo boost depleted. Replenish at your nearest Gatorade Training Facility”, the StateFarm this and Reese’s that. Yuck. The MyNeighbourhood area might be easier to get around than last year, but it looks like a NASCAR driver’s logo-covered racing overalls.

NBA 2K only gets away with what it’s doing because the actual gameplay is so good. I don’t know how that should make you feel.