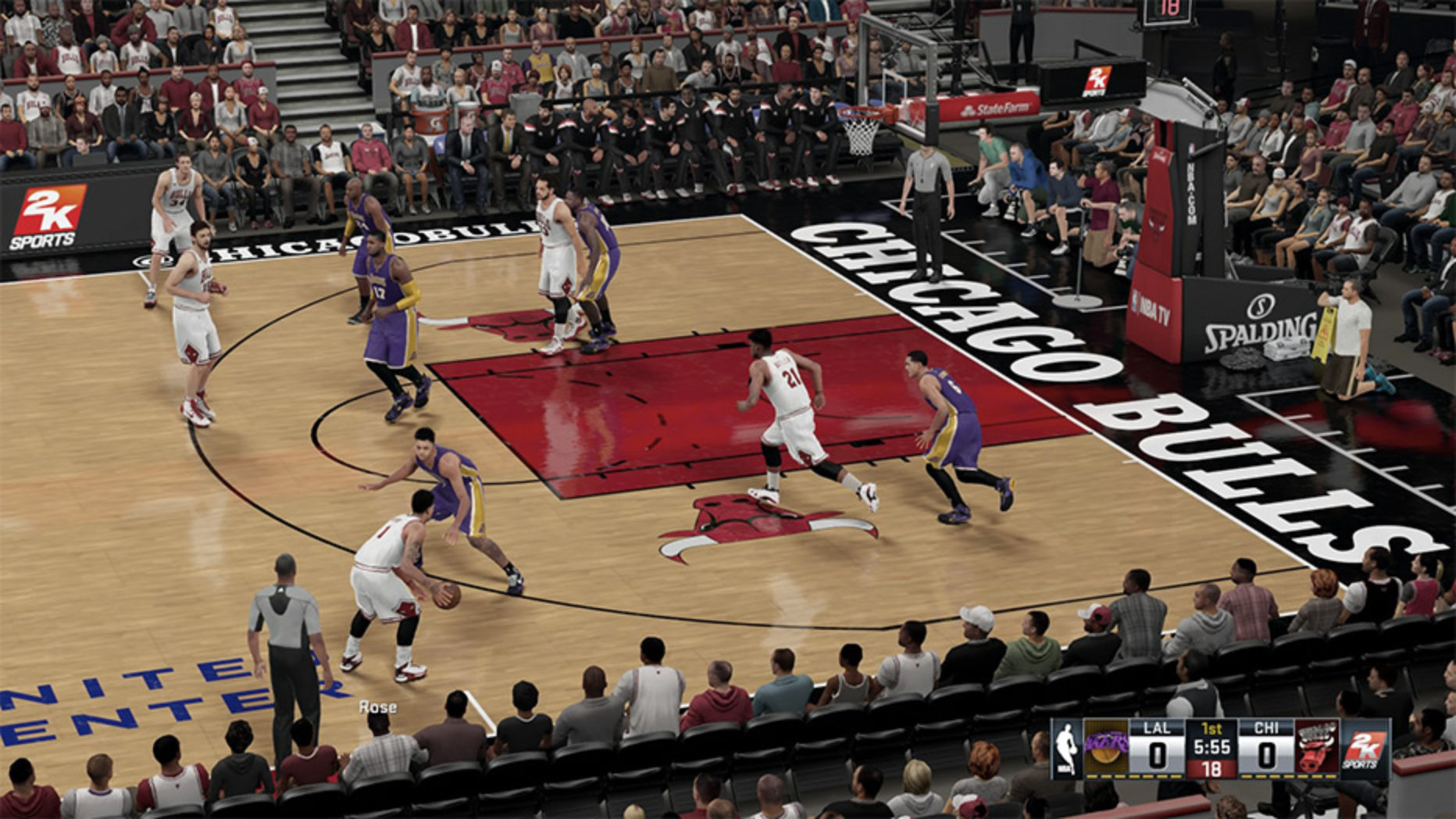 NBA 2K16 doesn’t just want to be a good sports game, it wants to put other sports games to shame

What is it? A sports game that allows you to play a variety of game modes revolving around the latest NBA basketball season, including managing teams and a career mode that includes a rather excellent rags to riches story created and directed by Spike Lee.

So I’m going to just say it straight… NBA 2K16 looks like you are controlling the real people on your television. It’s like you are watching a real game on television… except that the people do what you tell them to, and it’s mind-blowing. Some games have impressive graphics, some games have pretty graphics, but when playing this, my eyes/brain were legitimately swapping between the acceptance of the visuals as real and not real when in the standard TV broadcast camera mode that you are used to seeing on TV, especially when combined with the fluid and natural commentary that you often forget isn’t actual people actually talking. While reviewing the game I even had an older person walk in the room and be taken aback by the realism and do that thing where they start calling other people to come and look, as they stare in disbelief and throw around words crazily descriptive words like “so real” and “like, real”. It obviously doesn’t hold up in every angle and during some of the close-ups, but its still super impressive, and somehow runs well too.

NBA 2K16 in an example of just how much can be done with a sports title.

The great controls are back too, feeling incredibly fluid and real as you make use of the controller sticks to translate your thoughts into movements in such a natural way by almost mimicking the movement on the right thumbstick and watching it translate into player movement. If there’s one downside to it all though, its that we found it incredibly tough to actually sink shots, especially in the MyCareer story mode. While we tried to practise and perfect our own technique, things felt a little out of hand when everyone was praising me as the next big thing in the NBA during my rookie year, despite the fact that I had only sunk around 1 out of every 10 shouts I took at best. There’s a line between feeling like you weren’t playing well, and wondering how your player couldn’t even sink that jump shot from just 3 feet away from the hoop for the 3rd time in a row. It’s incredibly infuriating being 4 games into a season and having a field goal percentage of 5%, it could possibly be a bug or imbalance, as all real players from other modes seem to shoot fine and you seem to even sink shots fine in practice modes, so this is quite an issue for the game’s featured mode.

Speaking of the MyCareer mode, Spike Lee has been brought onboard to tell the story of your MyCareer player and his journey all the from high school games, right through to the college process and the final move to the NBA. Using advanced face and body motion capture and some proper actors (which mostly looks great, but not always), Spike Lee has crafted something quite special, with a story that’s genuinely engaging and surprisingly well written for a sports game story, even stretching cutscenes as long as 10 – 15 minutes as you watch a story of your struggles with family, friends, business and fame. It feels like something out of an interactive-movie game, although choices are kept to a minimum, almost like watching a series like Friday Night Lights but then getting to actually also play the games that happen in the show.

I like it, I really do and I think it really shows the potential of how much character and story could be injected into sports games as well as others. Sadly, we experienced game crashes after many of the cutscenes as well as some corruption issues and lost MyPlayer info a few times, it’s the sort of stuff that should be patched up, but if you are buying now, not even the 2GB was able to save us from the frustrations. Another note, my player was African-American, which worked out well with his African-American sister and parents, but when testing again after, I created a caucasian player, and the story mode doesn’t change in any way, and makes much less sense, so for the sake of the story, we highly recommend creating an African-American player for your run through the career story mode at least, as its clear that the story was crafted to be that of an African-American boy from the projects making his way up in the world, so despite the excellent and versatile character creation system, I’d have almost have preferred it if they set some limitations up from the start to help it fit in with the story better.

Keeping You Playing By Any Means Necessary

Once the story has wrapped itself up, even more of the game’s career mode fully opens up as you go into your career in the NBA, with such an amazing amount of depth including what to do on your off days, connections you make, sponsorship deals and more. It truly is a Role Playing Game for sports fans and a cut above so many other sports games out there. It isn’t all about MyCareer though, as the game is still jam-packed with other playable content, including team franchise modes, GM modes that let you manage your team as well as even a deep trading card game, it’s almost unbelievable to see just who much 2K Sports crams into its games for fans, as some of these feel like they could have been sold as their own $10-20 downloadable titles (don’t get any ideas, guys). Multiplayer is also supported in full force, not only allowing your standard online play, but also allowing things like taking your MyCareer player online as well as an awesome new mode that allows you to walk around parks MMO-style and see live games going on with players on some of the courts, even enabling you to stand in line to “get next” etc. A little unrelated, but after some complaints from last year’s game we also just wanted to add that load times seem to have been fixed and are no longer the issue they were before.

Despite a few niggles here and there NBA 2K16 in an example of just how much can be done with a sports title. Its fluid and realistic looking gameplay should almost be enough, but with so much quality added on, a great story and so much other stuff to do, any fan of the NBA just simply cannot afford to miss out on this game.

[Editor’s Note: Some adjustments have been made to the review since it was originally published.]