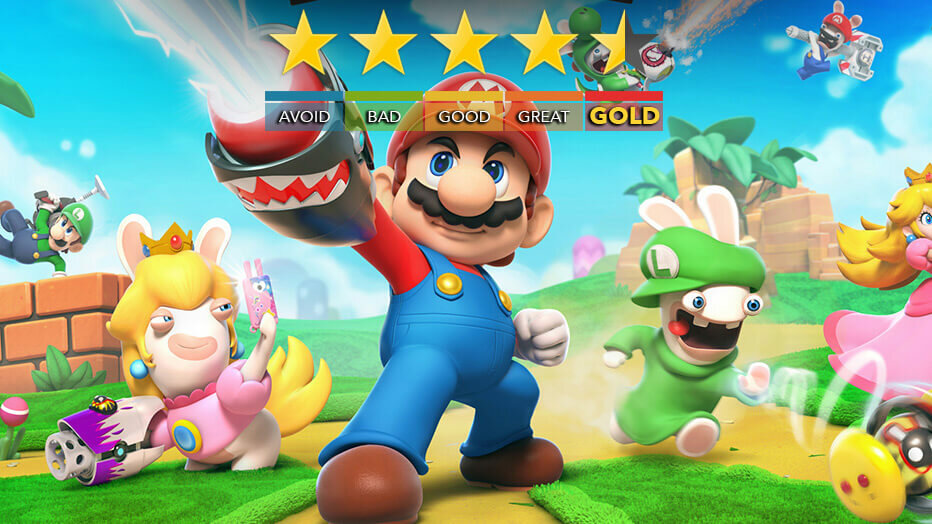 Mario and the Rabbids meet X-Com? Sure, why not?

What is it? A weird crossover between Ubisoft’s Rabbids and Nintendo’s famous Mario in a turn-based tactical RPG on the Switch. Gameplay is reminiscent of the XCOM series – but with less death and decay and more colourful sprinkles on top. – Exclusive to the Nintendo Switch

Verdict: Mario + Rabbids Kingdom Battle is the crossover you never knew you wanted and hits the nail on the head. Even if you aren’t a fan of tactical RPGs this is a title all Switch owners should consider.

Easily dismissed as a kid-friendly My-First-RPG, Mario + Rabbids Kingdom Battle offers a surprising amount of depth and variety that will intrigue hardcore fans of the genre too. Don’t let the Rabbids (who are the original Minions I might add) and the innocence of the Mushroom Kingdom trick you into thinking this game isn’t capable of bringing veteran players to their knees.

If you are expecting a great narrative in any game starring Mario you’re still out of luck. Most of the plot is ridiculous and a feeble attempt at justifying this crossover. It doesn’t matter though; the gameplay and sightseeing more than makes up for the storyline.

The game is beautifully presented and Ubisoft should receive more praise for what they did with the characters. Animations are spot-on and ooze personality – Rabbid Princess Peach is a sassy millennial, Rabbid Mario is in tune with his Mexican roots and the game’s companion Beep-O loses his cool after dealing with another lost Toad during an escort mission.

The only serious criticism is the lack of a world map when exploring the Mushroom Kingdom or when engaged in battle. This disorientation is amplified by the limited camera options which often led to incorrect commands being issued to your crew.

The key selling point in Mario + Rabbids Kingdom Battle is the strategic gameplay. The entire combat system is very well thought out and the ability to chain actions together creates a very natural and fluid flow that breaks the structured boundaries of turn-based games.