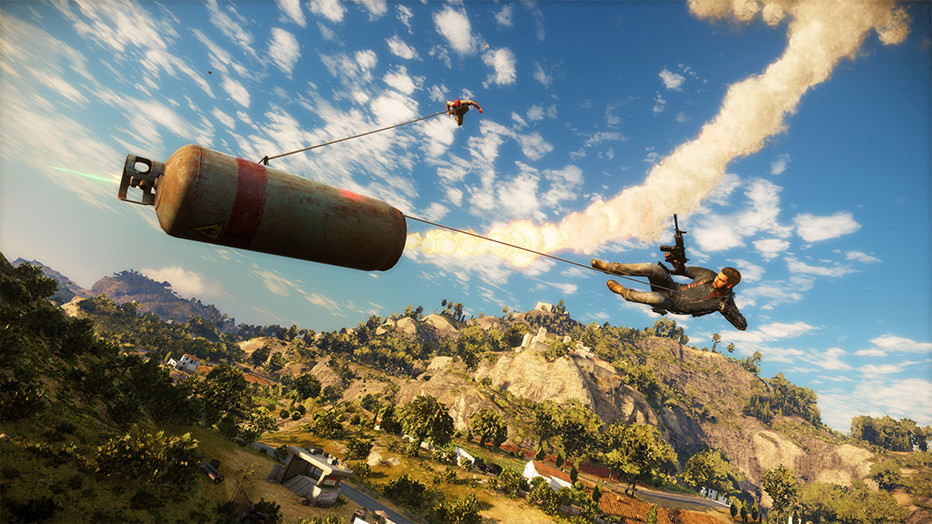 A crazy, wild one night stand that you probably won’t be calling back for a second date

What is it? A huge sandbox action game that has you playing a very manly action-man who’s pretty proficient at getting rid of dictators and blowing everything the f*** up using rockets, tanks, helicopters and pretty much everything else he can get his hands on.

Just Cause games don’t promise to be smart, or deep, or in possession of any sort of decent story and they really make good on this non-delivery. I found it super clear when playing Just Cause 3 that the game essentially wants to give you a big (and I mean beeeeeeeeg) map set in the fictional South American country of Medici and then kit you out with serious firepower, gadgets and vehicles so that you can go and blow everything to hell while exploring the gorgeous island setting.

Some of the gadgets are just fantastic amounts of fun, such as the featured duel-tether device allow you to tether one thing to another thing, and then pull them towards each other like a winch. This includes some things and other things, people and explosive things, but more importantly it also includes enemy helicopters and the floor. It’s a crazy amount of fun and almost feels like a gameplay mechanic that deserves better than its use in just this game. The huge world is impressive in its own right, having a nice atmosphere, pretty visuals and an acceptably smooth experience and when combined with the exploration and traversal aspect, it can offer quite a stunning experience at times.

While you have access to so many vehicles and weapons, the chaotic and fun gameplay itself doesn’t do enough to hold the game up, meaning that once the explosion honeymoon is over, the game quickly starts to feel a little shallow. An online system is built into the game to attempt to put a sort of leaderboard system into various aspects of the game, but rather than keep bringing us back, it actually got in the way more often than not as it continually insisted that we should be logged in to our single player experience for features we’d rather be left out.

It may still tempt you back in to play around a bit here and there, but I wouldn’t be surprised if your mind starts straying after more than 10 or so hours and you are tempted over to another game. If it was a date it would be a fun and adventurous one night stand, maybe a second hook-up but we wouldn’t be asking to meet the parents anytime soon.