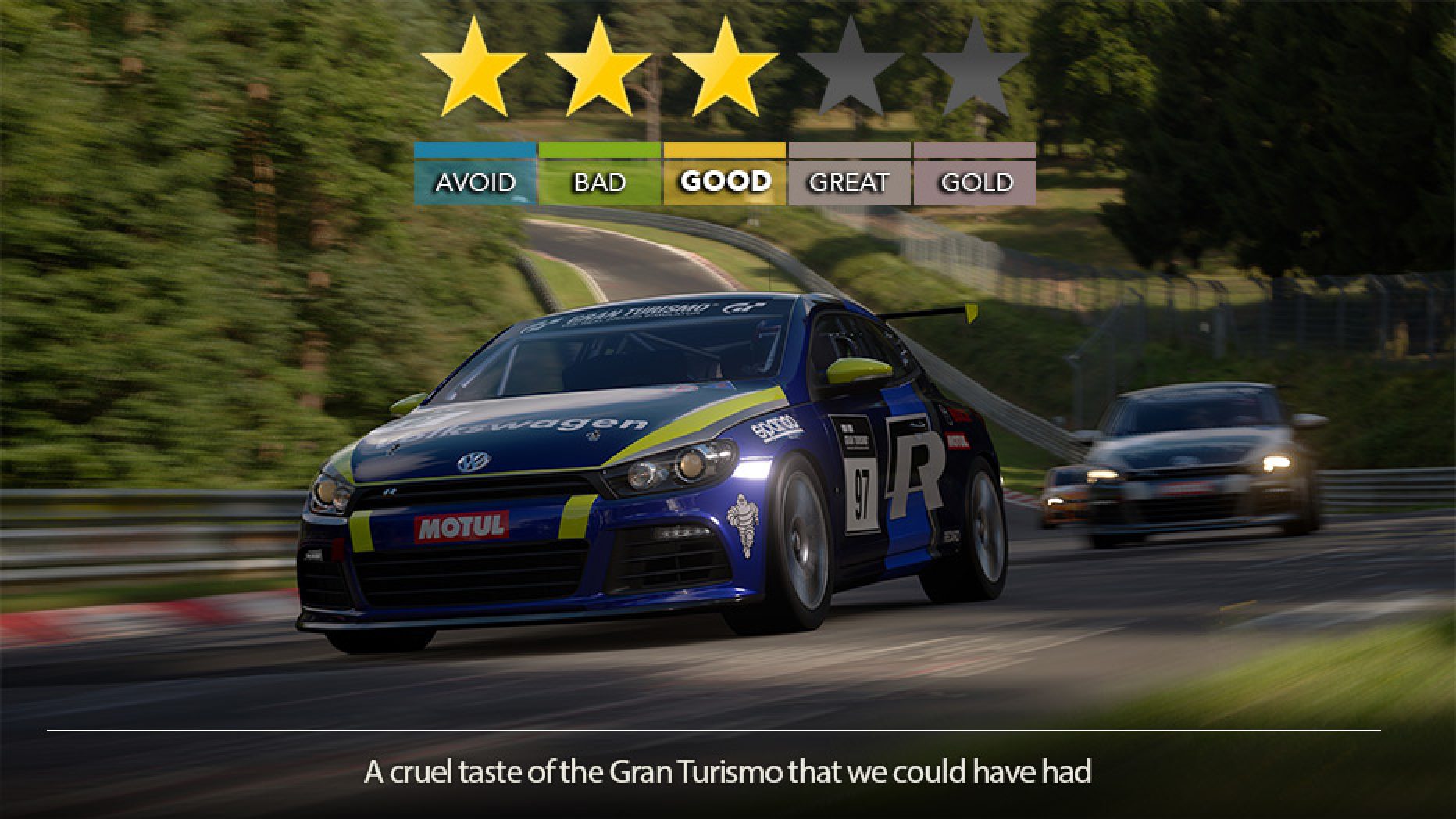 It’s a really solid feeling Gran Turismo, minus all the stuff you love about Gran Turismo

Gran Turismo Sport Review – Putting It All On The Line

What is it? An online-focused, competitive racing simulator designed to give aspiring race drivers a platform to hone their skills and prove their abilities against other gamers. – Exclusive to PlayStation 4

Verdict: More of an eSports racing platform; It’s pretty good at what it does, but I’m not sure many people want what it does.

Gran Turismo Sport is cruel. It’s cruel because it performs the unforgivable act of showing Gran Turismo fans the potential of what a new, fully featured Gran Turismo game could be… without actually giving you one. GT Sport was created as an online e-sports racer and while it does mostly succeed at delivering on its concept, the concept itself is not really interesting to anyone other than full-blown wannabe drivers who want to prove their skills to the world. It has less cars and tracks than you get in a normal GT game, with no career mode and it just sort of stings to see how much time went into GT Sport knowing that it could have rather been spent building up a true Gran Turismo sequel.

The online racing is solid, the cars handle well on and off-road (if you don’t have a wheel, switch the controller to Tilt Steering and get used to it – TRUST ME, it’s way better than using the stick) and a host of features have been put in place to try and keep races civil such as points that go on your profile if you drive badly as well as in-race penalties (the bad apples will always be out there though). Despite having the good ol’ South African 200ms of ping, the cars around me moved pretty naturally and there seemed to be no major lag-jumps or spikes during the races. Online races are also based on actual schedules, which means you can’t just join a race and go, you have to wait until the next race’s start time and can use the waiting time to set qualifying laps.

Aside from racing online, single player activities include some arcade and time-trial modes, and others mostly consist of beating the iconic GT licence tests, or doing challenges that help you perfect every corner/sector of the available tracks. There are also a few other things to do including livery and outfit designs (finally), photo modes and pretty interesting manufacturer history timelines, but there’s nothing here that will convince you to get the game unless you’re into the idea of online competitive racing.

One supreme bummer with GT Sport is that it’s purely an online experience, if you aren’t online, your options are not only limited to a few modes but you can’t even save your progress. Yeah, you read that right. If you do licenses and trials, you can’t even save unless connected to the internet.

The sound is better than previous titles and of course GT games are always visually stunning… but this time around it’s not consistent. On a standard PS4, what seems to be a dynamic resolution can sometimes dip heavily depending on the track you are on and amount of cars around you, which means that instead of looking like sharp and impressive, it can get incredibly muddy. When we tried the VR mode out (again on a standard PS4) it was even worse, and while the VR mode was incredibly immersive and special to try out as a mode, the visual detail and resolution suffered terribly as a result. We didn’t get to test it out on a PS4 Pro, but it definitely feels like there are compromises when running it on a normal PS4.