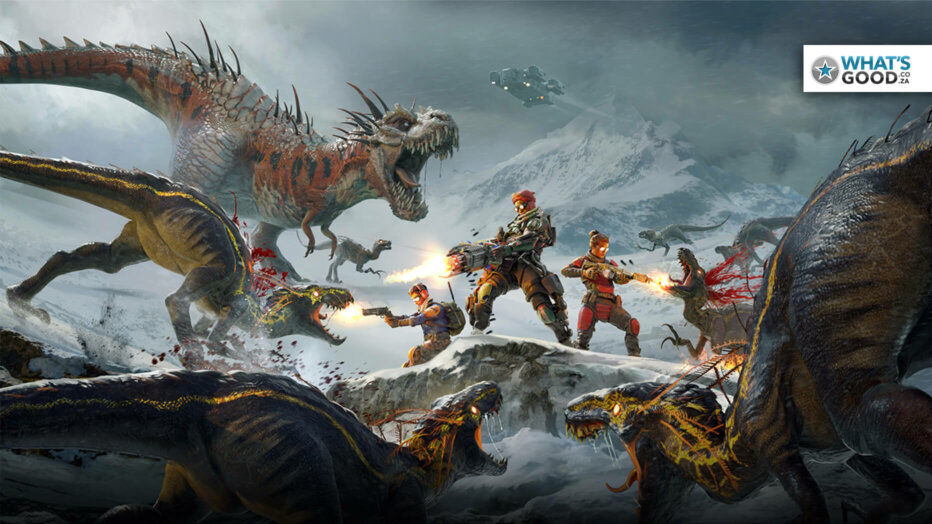 So a new 3-player Dinosaur-blasting action co-op title has hit Game Pass in Game Preview (Early Access) and we decided to take a quick crack at it.

Just like how the dinosaurs of Jurassic Park were brought to life, Second Extinction contains the DNA of various other games of the past. There’s a little bit of Left 4 Dead and a dash of Evolve and Monster Hunter, along with many others that combine to make up a game where you’re battling off hordes of smaller things and dealing with scary bigger things.

Graphics seemed okay enough but nothing to write home about, but it did allow my partner on an Xbox One X to still get a 60fps experience. It remains to be seen if that side of things will get any major updates leading up to the final version.

Our quick romp in the game took us to an icy planet where we were given objectives, and you’re able to pick from a selection of different characters that have special abilities and weapons. My hunter-like character was able to call in supplies, mask out scent, go stealth if he crouches and doesn’t move and also throw some shock grenades to stun enemies. If there’s one major gripe I had, it was that I had sniper rifle, but I couldn’t set my ADS (aim-down-sights) sensitivity, which made it incredibly difficult to hit anything, and I had to resort to sort of quick-scoping.

We were tasked with clearing out some hangars to get ships to evacuate, and things quickly went to hell when we opted to take on a big T-Rex and a giant horde of Raptors instead of trying to manoeuvre around it quietly.

Action gets frantic, and the dinosaurs –especially the big ones– can’t all just be blasted away because they have weak points that you have to target to do proper damage. This might involve hitting a T-Rex in the throat, or getting a heavy-armoured bastard to fall down so you can hit its soft belly.

We only spent around 30-40 mins in the missions so far and then had to duck out, but the time we spent was some really good fun and we are looking forward to jumping in more. So if you think this sounds like it might be your thing, grab two buddies if you can and jump in for some jurassic action.