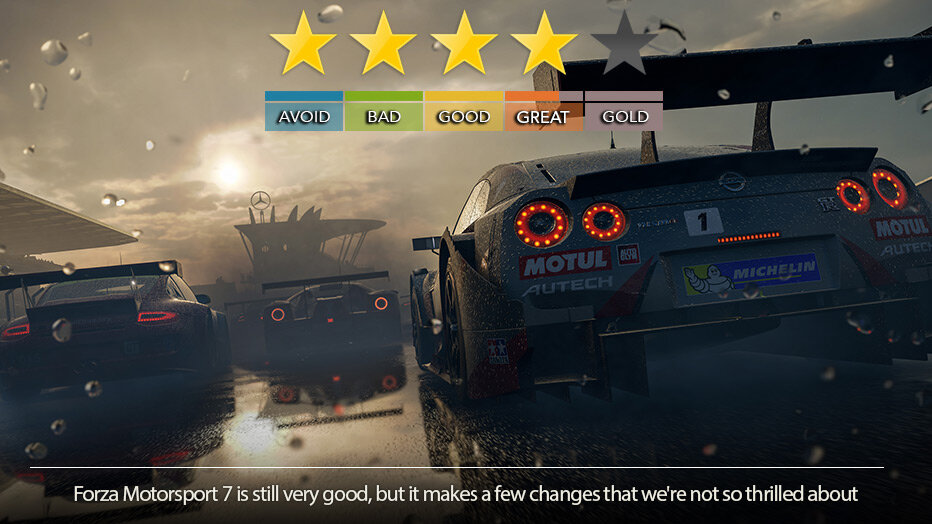 Forza Motorsport 7 is still very good, but it makes a few changes that we’re not so thrilled about

What is it? Forza 7 features both solo and multiplayer modes and serves as an accessible middle-ground between a simulation racer and a more casual driving game. This is mostly thanks to driving assists that range from a mostly realistic driving experience all the way to having an AI do almost all the work for you. Various solo career, online and connected modes allow you a variety of ways to progress, rank up, collect more cars, unlock outfits and attain mods through “prize crates”.

Verdict: It’s a fun racing game for all to enjoy, but it’s far from being my favourite Forza and I hope that Turn 10 re-evaluate the direction they’ve taken for the next iteration.

It was around about the time that I had just, as a result of a mistake, fully drifted a Formula E single seater precision race car around one of the toughest corners on one of the toughest tracks like a hooligan that I sort of sadly realised that Forza 7 really feels quite a bit more arcadey than previous versions of the game. While I’ve loved that the Forza Horizon games struck a great balance between sim and arcade to bring joy to the masses, It’s starting to feel like a bit too much of it is starting to leak over into Motorsport in the hopes of tempting those casual fans to come along for this ride. In fact, as a long time Forza fan I can say that Forza 7 has taken a couple of turns that, in my opinion actually move backwards from the last Forza Motorsport title. Some reasons may have been creative, but others also seem to be less Forza and little more financial.

Don’t get me wrong though, because in many ways Forza’s only other true competitors in this “simcade” space are the previous versions of itself, and on any given day a Forza game is still going to dish up a ton of fun gameplay, incredible visuals (yes the 4K version is coming) and cool other things to do for both serious race fans and newcomers alike. The game has a bunch of great tracks with multiple layouts and it now features better-but-not-quite-there-yet day/night/weather options, I say that because knock, knock, knocking on its door are games like Project CARS that are including features like fully customisable day/night cycles as well as dynamic weather and dynamic tracks that fully adapt and change over time – The kind of features that take the racing experience to a new level, but that’s not to say that Forza’s “no two races are ever the same” system isn’t still pretty cool.

It’s also now got more than 700 cars, each of which sounds great when driving although I did notice that they’ve opted to make all racing cars sound very tinny inside when using the cockpit views now, but I’ll forgive that because they’ve now included the much needed “dash cam” camera angle that other competitors have had for a while..

The play-to-unlock career mode coupled together with a new car collector aspect in the game also does a decent job of giving you stuff to do and work towards. I was also happy to discover that when I set my steering assist to simulation (usually reserved for wheels – you’re even given a warning about using it with a controller), it took a little getting used but ultimately provided me with the driving experience I was hoping for and brought the new handling mechanics to life. On the opposite side of the assists spectrum, Forza 7 has taken assists for casual gamers even further, making the game more accessible than ever. How accessible? Well, my nearly 4 year old kid loves Forza, but mostly spends his time just doing donuts or bouncing off of things, but thanks to a new, even more assisted steering assist mode, an AI driver will essentially drive the entire track for you if you just hold down the accelerator, allowing even little kids to experience the sensation of racing while still being able to control positioning and overtaking manoeuvres.

For all these reasons I would be crazy to tell you that Forza 7 isn’t a really decent racing game, because it is. I will however say that I’m not entirely convinced that it’s a very good Forza Motorsport game. I have a fairly large set of gripes, so let me get to them.

The Not So Good

Something worth mentioning is that I found frustration with the AI difficulty, in that the game still insists on starting you in the middle of the pack for each race, which means you either need to pick AI that’s slower than you so you can get to the front in a short amount of laps, or you need to select AI that’s as good as you, which leaves you stranded in the middle of the pack. The AI difficulty is also very inconsistent and in some race series’s I entered, I would find myself stuck in 7th all race long but then in the next race finish the race 20 seconds ahead of the same opponents. Bonuses for driving without assists also seem to have disappeared, with mod cards now serving most of that function in a way I’d rather they didn’t (Edit: VG247 has an excellent post up fully listing a lot of the infuriating changes made to the game’s earning system. Check it out if you want to know more) . 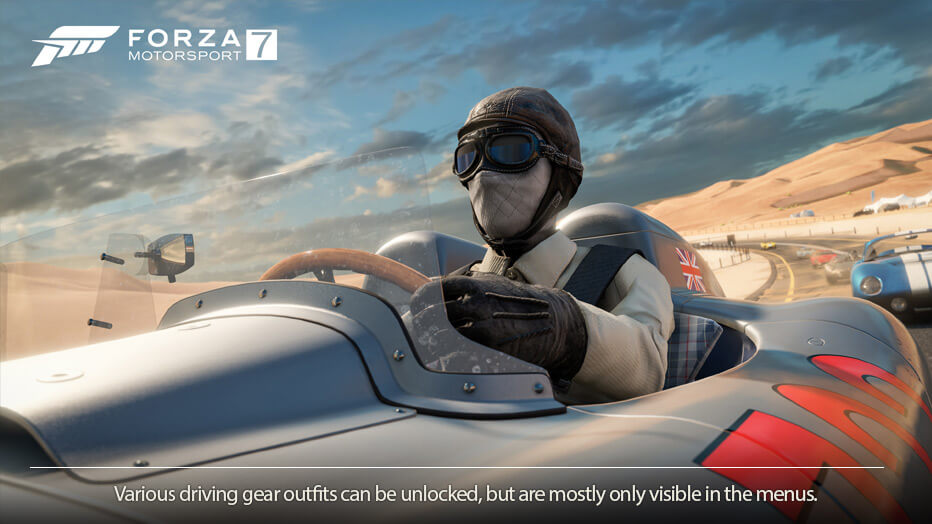 While mod cards previously added some novelty to your races, the new cards feel like nothing more than a vehicle to sell Forza’s now-included version of loot crates, and while the same goes for the new mostly useless driver outfits, I’ll at least give it to Turn 10 for coming up with some pretty hilarious and novel ideas for them, including driving gear that looks like knights armour, astronauts and more. Something that also bugs me is that this is the 3rd Forza Motorsport in a row (all Xbox One versions) that won’t allow me to join online hopper lobbies, and some research shows that this is due (but not yet 100% confirmed) to an apparent and alleged 100ms latency limit that basically means that anyone not decently close to a data centre just doesn’t get join in on the fun.

I’m also sad to see the incredible Hans Zimmer-esque dynamic musical score from FM6 go, especially since it’s been replaced by a new rock-like soundtrack that feels like it’s trying a bit much to be hip with the kids, and the concept of hearing the music dynamically through the racetrack’s speakers seems to have failed dismally, as in races even when driving a quiet electric car and with the music volume set to max, you basically don’t hear music for 99% of the race… and when you do, the musical tracks aren’t much to write home about anyways. Maybe it’s a bug, time and updates will tell. It’s a strange move away from the amazing dynamic tracks in FM6 that would change and build depending on your position in the race, and also add some incredible atmosphere to the pre-race pit menus, or even just a good old fashioned licensed soundtrack like Forza Horizon uses. One thing worth mentioning is that Forzavista modes are still available in some form, but all forms of cool voice-overs or history/info bits about the cars are left to short sound bites before some races, and interactions like starting the car aren’t there either. You also can’t change the garage background setting in the menus, and it actually does a pretty good job of making many of the cars look pretty terrible and plastic. I also found that in-race car models often looked a little lower in quality than I’m used to from Forza games, which makes me think – and this is just a theory for now – that they overcooked the visuals a little due to the power behind Xbox One X version and have had to make a compromise in this version to keep framerates stable. Something also very uncharacteristic of a Forza Motorsports title is that I actually ran into a few small bugs, such as certain sound loops getting stuck. Nothing major, but again, very uncharacteristic of a Forza Motorsports title.

One last point to mention is that the loading times in Forza 7 are really long. They seem to have tried to mask this as best they can by keeping the menus interactive at all times, allowing you to do things like select mods, change assist and even select cars while loading into a track. It works well a fair amount of the time, but many instances will have you hanging around for quite some time before jumping back into the action.

Despite my own gripes as a long time fan, Forza Motorsport 7 ultimately provides a lot of the goodness that’s always been available to Forza fans and finds new ways to accommodate even more folks. I do however worry that it’s pushing long time serious fans like little ol’ me out the other side to make space for the new passengers. So again, is Forza 7 a really good game? Sure. Is it my favourite Forza Motorsports title? So far… not by a quarter mile, and folks like me may be tempted to start drifting more and more to the green-hell pastures provided by more intense near-sims like Project CARS 2.