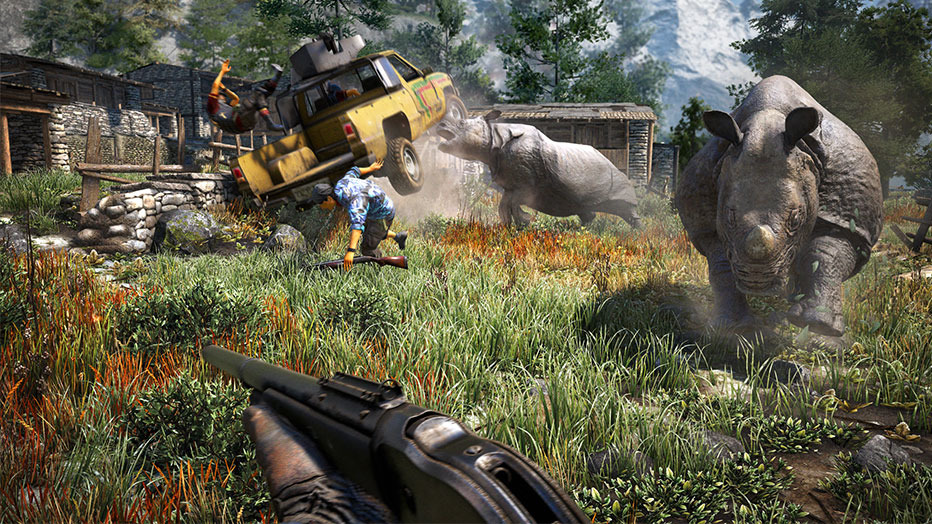 It’s not a massive departure from Far Cry 3, but is that a bad thing?

What is it? A first-person open-world shooter set in the Himalayas, where a returning son must rise up to be the hero that saves his native country from a viscous and flamboyant dictator.

Despite it feeling a bit like a huge expansion to its predecessor, Far Cry 4 is still gorgeous, a ton of fun and packed to the brim with stuff to do.

The great hunting, crafting and side missions are back albeit with improvements, like auto-driving to locations (very underrated), shooting while driving, grappling hooks, more verticality and a clever way to make you unlock things by playing more varied parts of the game. Co-op is a blast and lets you enjoy a lot of the world with a friend, although it’s so much fun that a co-op campaign of sorts feels sorely missed. Multiplayer pits stealthy hunters vs shooty soldiers and while the concept is fun, we’re honestly not sure how long it will last.

Despite its literally colourful villain, it lacks a lot of the fun, ‘craziness’ from FC3, leaving a lot of the story feeling a bit generic and taking itself a little too seriously. Still, moments later you may find yourself hunting with anti-tank mines or fishing with Mortars, so the gameplay makes up for it.

So, if you liked Far Cry 3 and want more, bingo. If you haven’t played 3, maybe track it down first, otherwise there’s lots of joy to be found right here.

[Read our Far Cry 4 interview with Ubisoft right here! Also, we asked Ubisoft to confirm if Far Cry 4 will play the same as console when played on a PC with a console controller, read it here! ]