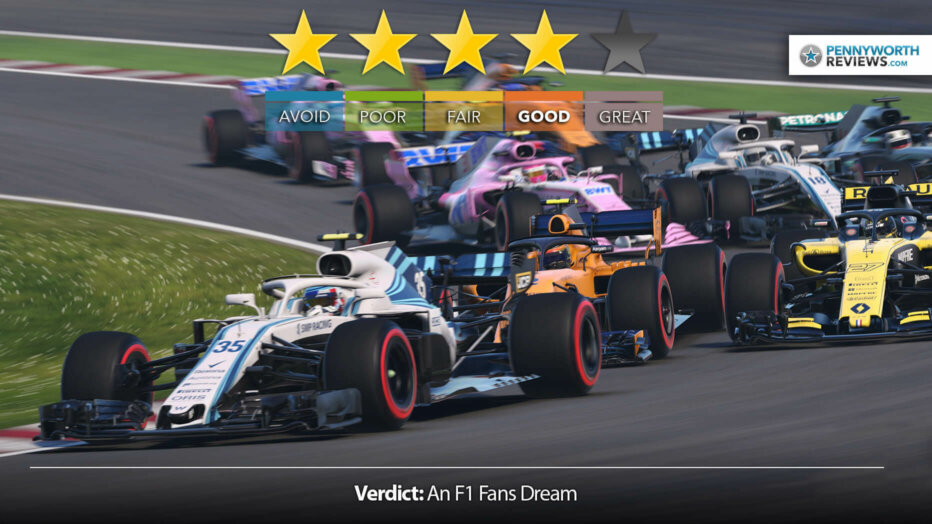 Besides a few niggles, it’s an F1 Fans Dream

What is it? The next annual instalment of F1 games, with new features that include the new F1 brand, specs, halos, 2 new tracks, interviews and more. – Reviewed on Xbox One, also available on PS4 and PC

When Codemasters released their first F1 title back at the start of the decade, the idea was to breathe life and style into a bland sim and also allow fans to experience a little more of what it was actually like to be an F1 driver when not in the driver’s seat. Last year’s F1 game was rather excellent, and I even considered it one of, if not the best driving game of the year, in a year full of Gran Turismos, Forzas and Project Cars 2. To be honest, if it wasn’t for the new season, branding and tracks – I’d almost be happy to tell you to stick with last year’s excellent game.

While the feel of the cars and driving is still excellent and the game continues to deliver on the great new system of doing practise session team tests, I would have love to see a bit more style injected back into the game. The new interviews conducted by a woman with a mic in the paddock get stale a little quick, with too little time to respond and the questions are sometimes off the mark. I was recently asked if the rumours I might be moving team are true on my first weekend with a new team I’d just moved to. There’s still a lot that can be done with the “driver experience” aspect and I’d really love to see some exploration into a character story, the way that the NBA 2K games have pioneered – and while we’re at it, what about a career mode that’s more about stepping into the highlights of the season rather than just playing a full season again. Character models of drivers are actually pretty impressive as well, but it’s a shame to see that there are really only a handful of pre-race animations that get re-used over and over so that you’ve pretty much seen them all by just race 3.

So F1 2018 is essentially still just a sim, but hey… it’s a really good, fun one with huge range between being a full sim and a super accessible game for fans. Visual seemed to have improved from last years title on the Xbox One, with graphics that can look jaggy at times but are mostly smooth with none of the terrible screen tearing that was so evident last year. The new look of F1 is a fun addition, the Paul Ricard and Hockenheim tracks are in and there’s been improvement to the game’s skies and lighting that are evident. There are also more classic cars than ever, and small bonus events are included that include them which is nice. A classic track or two would be awesome though, really though when it comes to a game for fans… not many sports games are able to deliver fans something so perfectly close to the actual sports experience.

F1 2018 is a continuation of the great formula seen last year, and ultimately delivers an excellent F1 and racing experience for fans.

[Side note: Is your F1 2017 or F1 2018 game on Xbox One having graphics glitches, bugs, colour flashes or flickering?  We had massive issues with and later discovered it is a problem on the Xbox One version of this and last year’s game if you have Game DVR set to record at 1080p. Setting it to 720p in the Xbox capture settings stopped all of the problems immediately.]