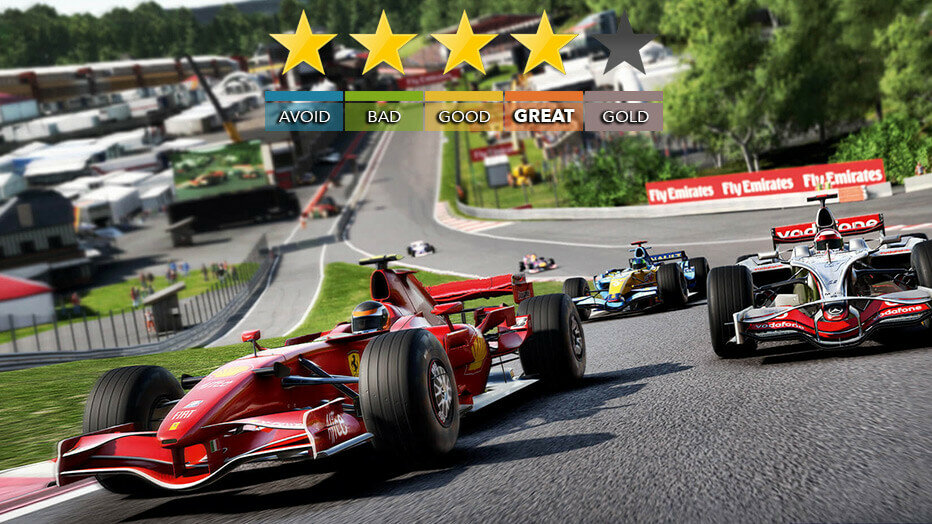 The Codemasters F1 series has peaked

What is it? The next instalment in the annualised series of Formula One games that allow you to live out the career of a Formula One driver, complete with all the licensed teams, tracks and those new, wonderfully grippy, fat tyres (and some historic cars too!). – Reviewed on Xbox One. Also available on PS4 and PC.

Verdict: Pole position. F1 2017 is easily the best of the franchise and even deserves a place on the podium with some of the all-time greats.

If you read our reviews of F1 2014, F1 2015 and F1 2016 you’ll see that Codemaster’s have been steadily fixing and improving the series after a slump into annual-release-land and I’m very happy to report that they have finally nailed it. They don’t get 100% of the credit though, as the new cars with the big, wide, sticky tyres are also play a big role in just how much damn fun it is to play the new version.

This season of cars are a joy to drive, not only are they faster and more fun, but they actually feel way more forgiving too. I’ll have to go back to giving Codemasters their deserved credit though, because aside from the new cars, you can now also once again drive some of the best cars from F1’s history including Senna’s McLaren. Alonso’s Renault and more… and this time it’s been handled right. My biggest gripe with the F1 games lately was that every year you just played the samey seasons all over again, and even with all the great new addition of practise sessions “team research quests” and upgrade management, you just ended up driving most of the tracks again, doing the same thing again – and if you lose interest by around race 5 or 6, you’ll end up only driving 5-6 of the same tracks in career mode every year.

This year, we have a great new set of championship modes to play with and they are exactly what was needed and range from historic career seasons, to sprint seasons that randomise grids and use various tracks or weather conditions you won’t usually drive that often without using quick-play modes. Add to this the multiplayer as well as a great event mode that updates online and offers new challenges (the launch event was a Belgian GP challenge over the weekend of the same race and had you playing as Max Verstappen trying to recover from a late-race nose cone issue). If I have one gripe, it’s one that I do believe is only an issue on Xbox One, and that’s that the graphics are very muddy from what looks to be a pretty stretched up lower resolution as well as some pretty bad screen tearing a lot of the time. Not a deal breaker, but you may wanna rather opt for the PS4 version if you have the choice (Xbox One X version will likely be fine).

With difficulty settings that range from complete casual to pro, new cars, old cars, new modes and more, F1 2017 is the perfect jump on point for newcomers and a definite yes for long time fans.