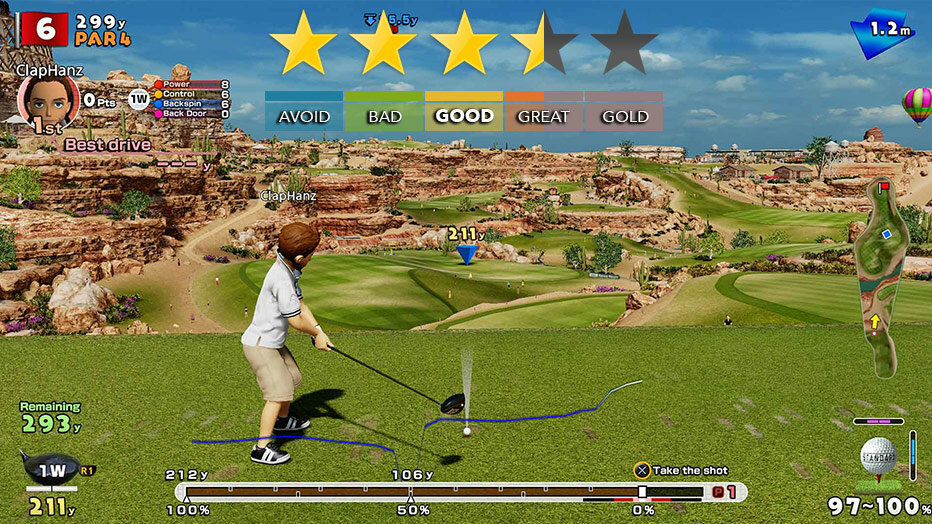 The beloved franchise returns for some fun

What is it: An accessible yet engaging cartoon-styled Japanese golf franchise that includes lots of customisation options and additional activities – Exclusive to Playstation 4

The Verdict: Good times despite feeling like the original charm has been slightly diluted

Everybody’s Golf (also sometimes know in the past as Hot Shots Golf) is the very simple and surprising reason that I ended up putting hundreds of hours into my PSP when it launched years ago.

Charming characters, a fun atmosphere, incredibly fun gameplay, tons of unlocks and customisation options for your characters turned what looked like a kids version of a boring sport into some of the most fun I’d had with a sports title in years. The PlayStation 4 version now brings many of these great features back, but also injects a new open-world and online element into the game, having you do everything from a central hub and giving you the ability to join open online golf courses that you can play on or explore. There’s even more to do now as well, so you can join up with friends, mess around, try some fishing or even drive around in golf carts.

I do feel like some of the structured magic and charm of the previous games’ courses has been lost a bit in the online spaces especially in the beginning and the entire opening phase of the game is a bit of a long, grinding slog that has you pretty much doing the same thing over and over again before you really get anywhere. Also, not having it on-the-go like I’ve enjoyed so much with the handheld titles and even Mario Golf feels like a real shame after being so used to experiencing it that way, as it feels a little less suited for long sessions in front of the TV compared to quick games here and there while on transport or on vacation.

If you’re into golf games though, and have always shrugged titles like this off as “kiddy” compared to Tiger Woods titles, give it a go, you might find yourself very surprised by the great gameplay and huge variety.