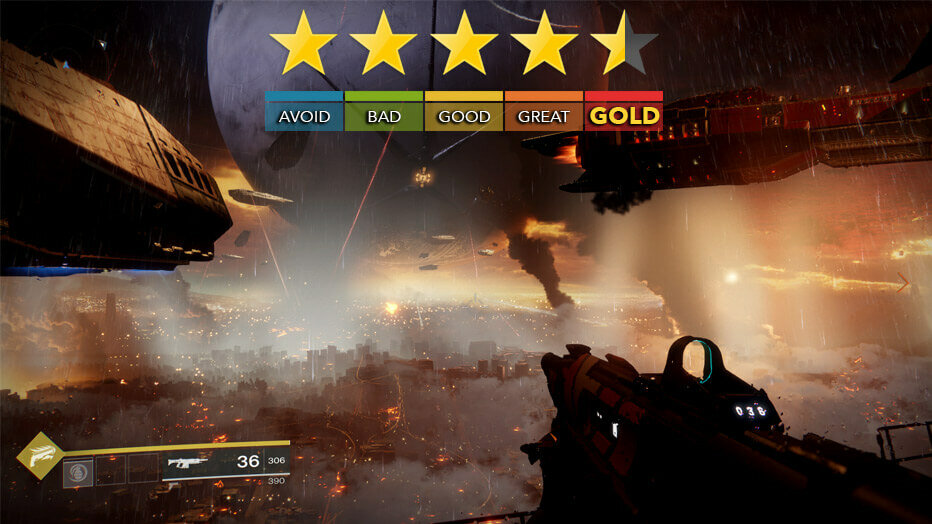 Much needed improvements bring the promises of Destiny 1 to life

What is it? The sequel to the hugely successful quasi-MMO first-person shooter from the original creators of Halo. This “Diablo-with-Guns” concept is best experienced with friends and has you joining up with up to 2 buddies in a “fireteam” to save the galaxy, complete missions, explore large areas, shoot/kill tons of baddies as you level up and improve your character with an ongoing conquest for loot, weapons and armour. There’s a multiplayer versus mode too. – Reviewed on Xbox One, Also available on PS4, Coming to PC soon

Verdict: Fantastic! – Great gameplay, much needed tweaks to the formula and tons of fun things to do makes Destiny 2 the game we wished we’d gotten the first time around.

If you’re familiar with Destiny, the first thing I want to tell you is that I was initially hyped but ultimately a little underwhelmed with the first run around the park, mostly because it undelivered on promises and while still pretty fun, clearly felts like it wasn’t as good as it could have been. Online Action-RPGs like Diablo and even MMOs like Guild Wars 2 contain a certain kind of magic in their DNA that makes it fun to keep coming back, and it’s something that just didn’t exist in Destiny… until now.

Some have called this sequel a Destiny 1.5 expansion pack, which I don’t agree with and yet it’s still not quite a full sequel either… which has left me with the feeling that this sits somewhere around Destiny 1.85. Many elements of the game including weapons, menus, designs, gameplay mechanics and enemies are barely any different to the first although a lot of the user interface and gameplay elements have undergone much needed tweaks to make for a much more fluid and enjoyable experience overall. One of the biggest points worth mentioning is that Bungie has made a huge improvement in Destiny 2’s campaign, reminding us that these are the folks who served up those epic Halo campaigns in the past. Existing characters have been given some much needed depth and further development, and a perfect quantity of humour has been injected into the dialogue and chatter to balance out the otherwise serious tone of the setting.

It’s all of course, still held together by some incredibly sharp and enjoyable gun-play, which while still mostly similar to the first, somehow feels even better now. The visuals are nothing to scoff at either even with the Xbox One’s slightly reduced resolution, and the environmental and art design is a huge improvement over the first and breathes life into the experience. The large planet areas are way more interesting to explore now and are jam packed with little discover-able nooks and crannies that really improve the overall sense of adventure.

There’s also a lot of fun stuff to do, ranging from smaller adventure quests to patrols, (much) improved public events, daily challenges and simply just wondering around often tends to always serve up something to keep you busy and gives more of the connected online experience I wanted from the dynamic events promised in the first game. Of course, once you’ve gotten through the base content, the eternal search for loot beckons as you also take on bigger challenges, Strikes and Raids, with one being available “in the box” and more to come with expanded content, and for those who want it the Crucible offers all the versus multiplayer action you could want.

I think much more could have been done to Destiny 2 to make it a true sequel, even just starting with a few new classes and it’s also a shame that while the versus Crucible multiplayer modes are okay, they don’t hold a candle to the Halo experience that we know Bungle is already capable of. Destiny 1 apparently had a lot of fun to give but only to those who really stayed for all the late content at high levels, and I’m happy to say that with Destiny 2, the recipe for fun has been perfected and offered up front. All the right ingredients have been put in the pot and the result is a healthy serving of good times and enjoyable online action. After feeling burned by Destiny 1, I’m happy to say that I’m officially converted. Destiny, I like you again.

Destiny 2 is headed to PC in just a little bit, and we are hoping to bring you our full impressions when the time comes.

Extra note: It might go without saying, but I’m going to say it anyways; Destiny 2 can be played solo but it is at its core an online multiplayer experience and is at its best when experienced that way. So if you’re cool with paying the asking price for maybe 20 odd hours of gameplay including campaign, some side missions and maybe a bit of experimentation with public events and versus, I’d say it’s still not too bad a deal but you will be missing out on some of the bigger events and experiences that makes it what it is.