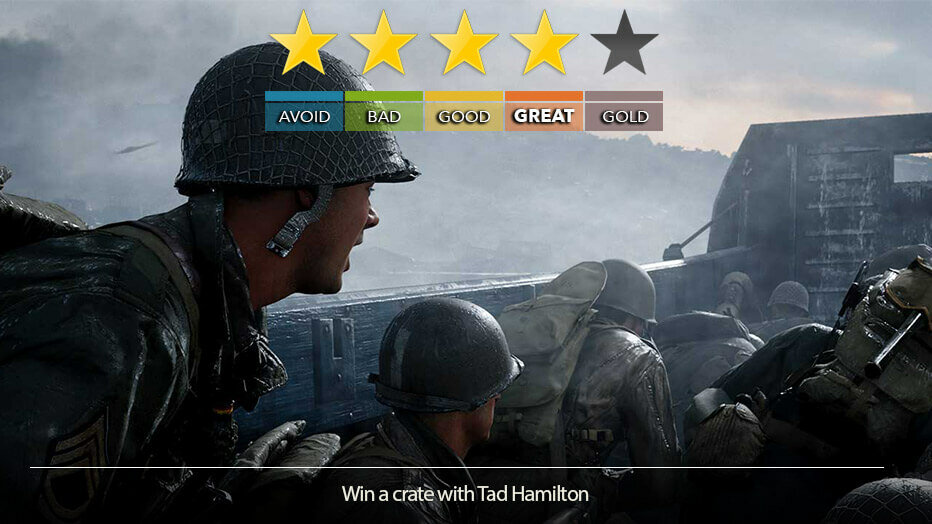 Solid multiplayer and a so-so campaign, WW2 is back

Call of Duty: WW2 Review – Loot’s on the Ground

What is it: The First-person shooter Call of Duty returns to World War 2 and includes a story mode / campaign, online versus multiplayer as well as a co-operative Nazi Zombies wave defense mode. – Review on PS4 and PS4 Pro

Verdict: More hit than miss – COD: WW2 is a solid Call of Duty, with fun multiplayer but a campaign that could have been so much more.

Call of Duty: WW2 brings the franchise back to its original setting for the first time since COD: World at War in 2008 and it succeeds in some areas while falling a little flat in others. The sharp, almost unbeatable feel of Call of Duty’s gun/game-play is still as precise and fun as ever, and thanks to some new modes and a couple of old returning favourites, there’s a lot of great places to experience it.

Despite being prettier than ever, the campaign mode feels like a tired repeat of previous World War 2 shooters and many scenarios made it feel less like I was in a Hollywood movie and more like I was on a Hollywood movie set, and that at any moment a wall was gonna fall down and reveal some stage lighting and a few props. It’s still a fairly solid campaign in terms of gameplay and variation, but the story is more about bro-mances and “good-job-soldier” speeches rather than experiencing history in any way, also leaning more towards Michael Bay’s style of action films and much further away from much of the realistic-yet-artsy inspiration drawn from films like Spielberg’s Saving Private Ryan back in the day.

Multiplayer is where the game still shines, despite having a case of the me-too flu and implementing a Destiny-styled Watchtower/Headquarters area and implementing a lootbox system that I really couldn’t care for. The new War mode is great fun and provides multiple objectives within one scenario such as taking an area, building a bridge and then escorting a tank, with the real bummer being that there are way too few maps at launch. Original modes such as Team Deathmatch and Capture the Flag are still their good old selves, and feel more like the grounded COD I loved and less like the wall-running modern stuff (that you might like). Nazi Zombies mode is as good as ever, with celebrities making appearances, great looking areas and a fun way to play the game with friends.

When it’s all bundled together you’re still left with a pretty good Call of Duty, it’s just a shame that the campaign felt generic, tired and wasted in so many ways. If I must be honest, I think World at War was better, and terribly ignored after people were still stood staring at their shiny new toys in Modern Warfare.

Side notes: Waypoint has a great article titled Watching History Fade Away in Call of Duty: WW2 that captures a lot of my feelings about the campaign / #winacratewithtadhamilton