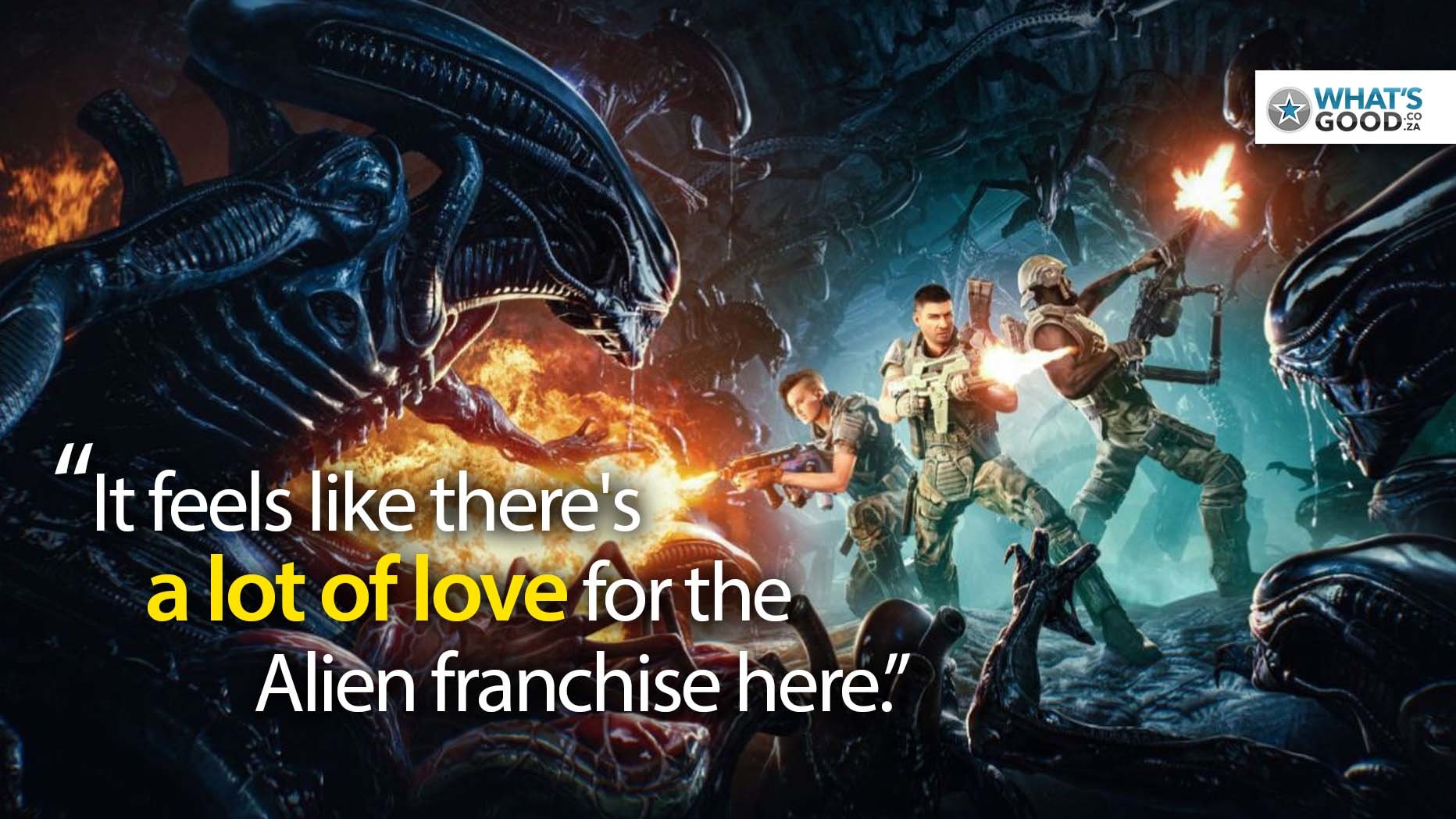 Aliens: Fireteam Elite –  Platform reviewed: Xbox Series X and Xbox One X | Time spent: 3-4 hours online multiplayer | For people who like: Left 4 Dead, Back 4 Blood, World War Z, Alien: Isolation, Alien movies | Note: Due to technical difficulties our time with Aliens: Fireteam Elite has been limited, and so our Quick-Look review will be upgraded to a full review in the near future.

Aliens: Fireteam Elite might not be the same kind of game, but it still has a tough job convincing gamers that it’s nothing like the very disappointing Aliens: Colonial Marines that burnt many fans. From the time we’ve spent with it, there’s not a lot to worry about at all!

We’ve really enjoyed our time with Aliens: Fireteam Elite, thanks to its frantic, fun action and thick atmosphere. It’s also not a full-priced game which makes it even more tempting, while we haven’t yet had the time to try out all the missions yet, the experience is a solid one – although we do hope they find a way to vary the locations a bit more than just being inside a metal ship at all times, we will see when we get more time with it.

Aliens: Fireteam Elite puts you into the world of the movies as a 3-soldier team of badasses who have to work together to take on hordes of Aliens and complete objectives in online co-op (no offline co-op unfortunately). It’s a third-person shooter, with cover and upgrade elements, and you also rely a lot on what classes you’re using and the special abilities you have to boost your team, heal or kick Xenomorph ass. Your team requires 3 people, and if you’re short of players, the empty slot is filled by a computer player.

You create your own character, and can pick from 4 different classes: Gunner, Demolisher, Technician, Doc and Recon. There’s a hub world where you are able to run around, buy stuff and upgrade weapons, abilities and more before heading into your missions.

As someone who loves co-op and has some great 4 player groups that I play with, I am unfortunately beyond frustrated that Alien: Fireteam Elite has opted to go the 3 player route instead of 4. Who do I blame? Is it Destiny’s fault? I want to blame Destiny.

I’m a huge fan of these horde-filled co-op games like Left 4 Dead, World War Z, Zombie Army, Back 4 Blood and more. With that in mind, I can happily say that Alien: Fireteam Elite has been a TON of fun so far! The action is intense, the controls feel great and the gameplay is a whole lot of fun.

We opted to start on the tougher difficulty, despite warnings that our team rating level was too low, and we had a blast, and then cried a lot, and then eventually opted to move back to the normal setting because we got our butts kicked with lethal efficiency. So the game is designed for you to play and upgrade and then retackle some challenges similar to other games in the genre.

Related to that, there’s also a lot of depth to the upgrade systems for the weapons, and it feels like something that’s going to be fun to really sink your teeth into.

Thick with atmosphere… and acid

Something I really love about the elements that add to the atmosphere of the game, is not only that the graphics are really pretty to look at, but I just LOVE that they have opted to use old-school music from the films, with brassy sounds and violins. Even better, when you get a headshot, they’ve replaced any sort of usual video game sound with a little stroke of the violin from the film score to seamlessly integrate into the scene and make it feel like a special little moment was scored in.

On the Xbox Series X we were getting what looked like native 4K@ 60fps, while those playing on the Xbox One X where getting 4K and 30fps. It seemed pretty solid with no huge notable dips. What I do definitely wish they had, was an option for the Xbox One X versions (and assuming the PS4 equivalents) to rather opt for 1080p @ 60fps.

The other good news is that despite even playing before any sort of launch day patch, the game felt very smooth and mostly bug-free.

It feels like there’s a lot of love for Aliens here.