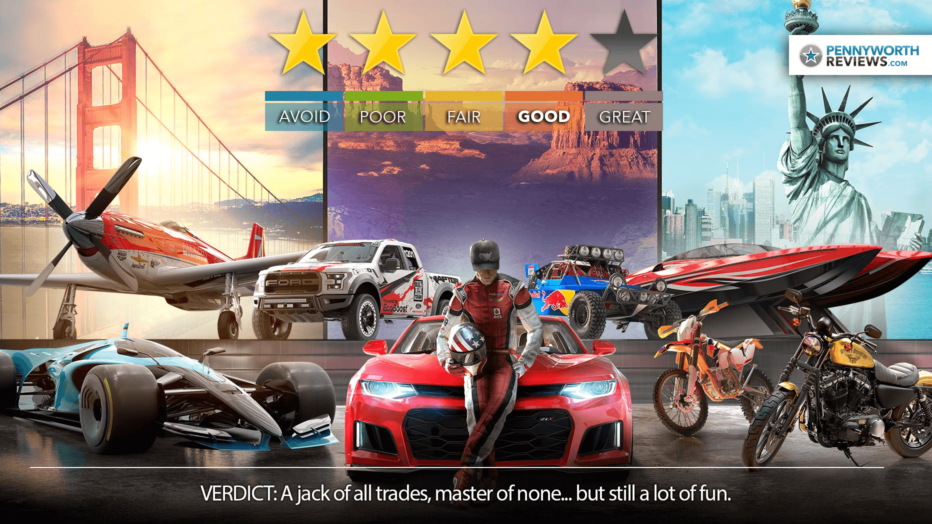 A jack of all trades, master of none… but still a lot of fun

The Crew 2 – The Sequel You Hoped For? | Console Review

WHAT IS IT: An open world racing game of multiple disciplines, across a mini-town version of the United States. – Reviewed on Xbox One

VERDICT: A jack of all trades, master of none… but still a lot of fun.

The Crew 2 is a follow-up to, you guessed it, The Crew. It is Ubisoft’s attempt to create it’s own open world racing game in a genre that is quickly becoming very popular for everything from quick fix racing to very involved campaigns. It is this popularity of the genre that has also crept into The Crew 2, making the game less of a racing game, and more of a popularity contest. Winning races gets you followers on a fake social network, which in turn unlocks more races. This is very sound logic. The more people like you, the more likely you are to be a better driver.

The Crew 2 ups the game though, and rather than just race cars, you can also race bikes, ATVs, trucks (the American bakkies, not lorries), boats and even planes! And these races takes place on a version of America that has been brilliantly scaled down to a bite-size chunk. Major landmarks, cities and venues are all there, and if you wanted to you can hop in a sports car and drive from the West coast to the East coast, non-stop.

The importance of social popularity in the game also means that races are called “events”. Most of these events are in fact races, but winning is a secondary objective. The races vary broadly from street racing and touring car races, to off-road monster truck racing and aerobatics displays, all over the USA with its varying climates and landscapes. The highlight though is races where you start in one vehicle, and switch to either aerial, or aquatic vehicles during the race. You can jump your monster truck off a big ramp, transform into a boat and land in Lake Michigan. The quick switch between land air and water vehicles are very smooth and a lot of fun in free play as well where you can switch at will.

Special mention has to be given here to the smooth transition from open world free play to entering races. The map is a seamless camera zoom from your vehicle to the whole map, and feels very Google Earth. Selecting events can be a fast travel away, or you can use GPS and make your own way there. Loading the specific race happens while you drive through a staging area, keeping the illusion of a non interrupted game at all times.

Competition can either be CPU controlled or you can hop in and play against any online competitor you come across while simply driving around the map. The game is by no means difficult and should be enjoyed by anyone who likes fast cars, boats and planes. And thanks to a fair bit of rubber banding, any crash will cost you some time, but if it happens early enough in the race you will always catch up again.

The only gripe I have with the game is that it tries too hard to be a such an all emcompassing racing game that it ends up being a master of none. The real life race tracks like Laguna Seca feel flat and bare, the famous cork-screw barely worth a mention. Most cars handle so similarly that you won’t even bother changing them for specific races. The bikes are not bad but something just feels wrong about them, while the planes feel slow and heavy compared to what I have seen them to be on TV.

Considering the massive scope of the game it remains quite the accomplishment to squeeze all of this content into one game. But this dilution of racing disciplines makes for a game weaker than it could have been.