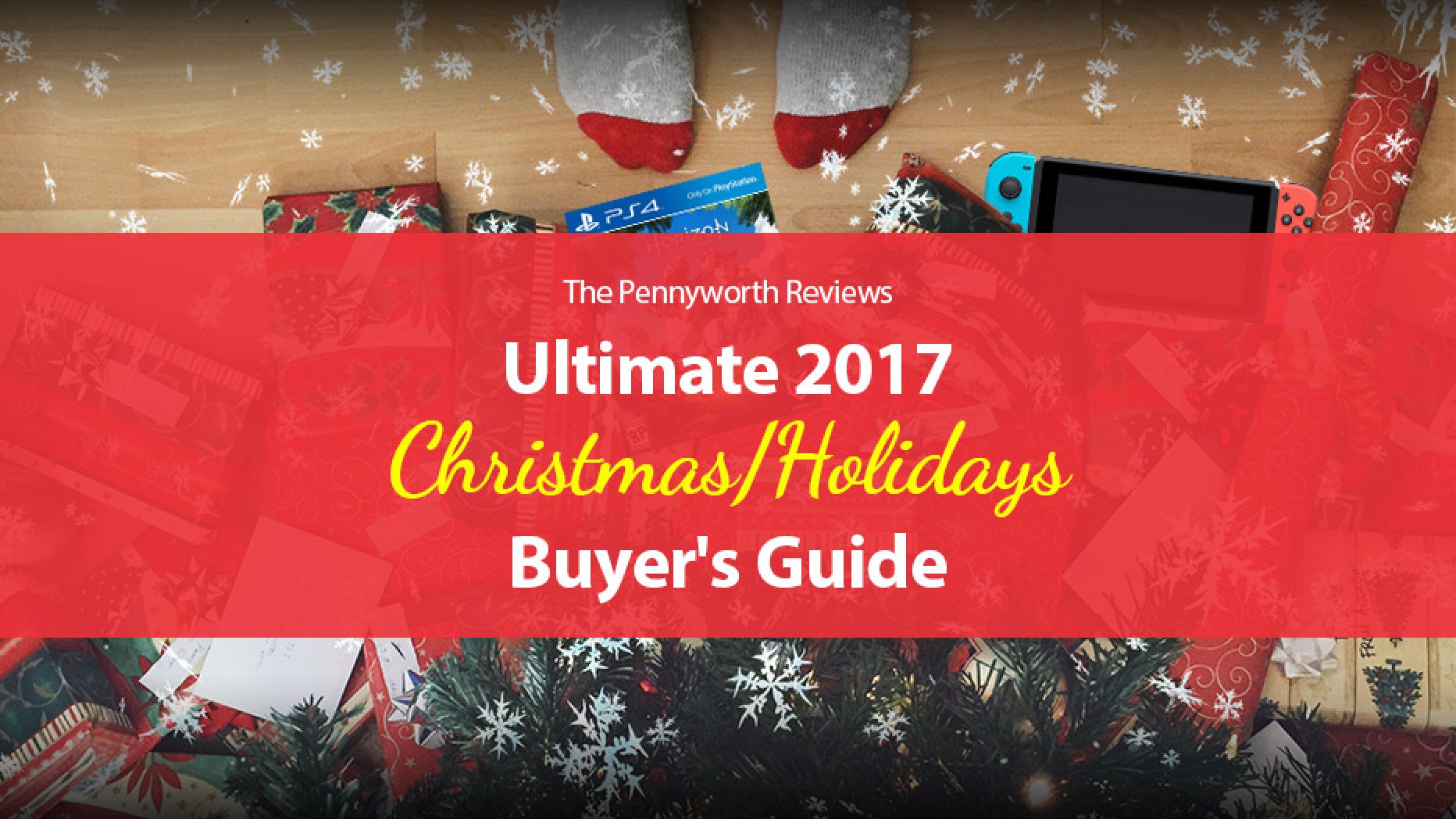 Note: This post has been put together only for the love of gaming and gamers. None of the products, games or links in this post are paid features or provide any kickbacks to us in any way. We hope you enjoy the post!

The holidays are upon us, and for many of you out there that means lots of time for family gaming! Some of us are also celebrating Christmas soon which means LERTS ERF PRESERNTS! For parents buying games for kids / nephews / friends can be a little tough, and the same goes for folks who maybe want to buy someone a gaming gift but don’t know what to get them.

What we have here is a comprehensive list of suggestions for every game category, complete with links to reviews and trailers that should help you find what you are looking for no matter who you are or why you are looking to buy some new games. We hope you enjoy it, and if you find it useful, please share it with friends and family! Here we go!

Note: Be sure to check out the posted trailers for age ratings and additional info.

You or your kids are either new to gaming, want something different or you want to make sure they are playing some good, clean, wholesome shit.

So, you’re looking for something that you or maybe your kids will enjoy without turning them into little online monsters that insult people’s mothers? Look no further than the Nintendo Switch and a copy of The Legend of Zelda: Breath of the Wild or Super Mario Odyssey. Don’t be fooled by the cartoonish looks and bright colours because while Nintendo aren’t in it for gritty violence or realistic graphics, they sure know how to put the kinds of games together that get big smiles out of people, no matter the age. Still need some of that other stuff? This little wonder-machine has a full version of Skyrim available for it and even the latest DOOM.

If you didn’t know, the trick to the Switch is that it works as a mobile gaming device AND a docked home console. Neat! They go for roughly R5,200 / $300 / £279 but budget a bit extra for a game or two and some accessories. Zelda is the better option if you want to give them something to last as long as possible but I have been told that Mario gives more of that upfront fun-KAPOW Nintendo experience. Be sure to grab a screen protector and carry case with it, and if you really love your children, take it out and do all the setup/updates ahead of time before repackaging it so that they can enjoy it the moment they open it.

The Legend of Zelda: Breath of the Wild

Open world for the open world

The Switch looks awesome, but we already have / want one of those newfangled PS4 / Xbox / PCs.

We got you fam…ily. 2017 was an incredibly good year for gaming, and there’s a little something for everyone so if you’re looking for something special for yourself or someone else, this list is sure to have some gems for you.

Here are some of the best games available this year, which are sure to put a smile on your or any of your loved ones’ faces. Well, unless its the horror category.

In many ways this genre has always been a shining example of the console gaming experience. Horizon Zero Dawn and Assassin’s Creed: Origins are similar in their make-up and both offer incredibly gorgeous, massive open-world adventures. If you’re on Playstation 4 then Horizon is the one to go for, evident by multiple nominations for Game of the Year. If you’re on PC or Xbox One, don’t be too sad because AC:Origin’s is not only similar to Horizon in many ways, it’s also damn good to play and offers a new and refreshing direction for the Assassin’s Creed franchise.

Online shooters are all the rage these days, whether its shooting at things at your buddies, or shooting things with your buddies. This year has some decent picks for both, with Destiny 2 being a huge hit for online co-operative play with buddies (and versus modes) as well as its brother from the same mother (err, publisher), the hugely popular Call of Duty, which has returned to its World War 2 roots.

Sometimes there’s just nothing better than getting comfy for some great story-driven gaming fun. While our two picks are wildly different, both offer up great solo gameplay combined with stories, characters and set-pieces that will have you on the edge of your seat as much as they may have you leaning in to see what your character might say next.

While this category can often come close to what we see in action-adventure games, this is more about playing something that really involves you getting up close and personal with your enemies before doing some slicing and dicing or kicky-punchy on their faces. Japan is pretty damn good at this sort of thing, and so both of the games featured here are from the land of the rising sun, or fist. They can get a little crazy-cooky at times, so be warned and also do note that Nioh is designed to actually be really difficult. If you’re thinking about buying or gifting one of these and are afraid that the player isn’t quite cut out for it, be safe and head back up to the action/adventure/story titles.

It’s actually been a pretty damn solid year for racing games, with multiple big-franchise entries all going head to head for pretty much no good reason at all. This does mean that there’s a bit of something for everyone though and as a huuuuuge racing/car fan this is a really tough one considering that there are so many options. The biggest surprise of the year has got to be F1 2017, not only because it broke away from its usual annual cycle to deliver the perfect package this year but because… well it’s F1 which means a lot of people might not be that interested in it if they don’t follow the sport. Trust us though, this is one of the best the series has offered in years. Next is Forza Motorsport 7 for Xbox One. Surrounded by controversy for compromising the gameplay/mods system to accommodate a loot-box system, the truth is that when you look past all of that you get a really beautiful, feature filled console car and racing experience. If you only have a Playstation then check out Project CARS 2, it’s the game I actually want to recommend instead of Forza 7 but the truth is that its a bit too hardcore and a bit too finnicky to recommend to just anybody, but for those who really love motorsport it’s pretty amazing.

Fighting games are another one of those classic console genres that have been around forever and still really manage to capture the console experience, especially when shared with friends. While a few well known franchises released new versions this year, Injustice 2 is a run away winner for my recommendation. It has great gameplay, great graphics and a story mode that feels like you are just getting to play out the fights in a pretty awesome DC Animated Movie.

The line between role-playing games and other genres is starting to get very blurred as more games adopt RPG elements into their systems more and more. So when we say Role-playing game here, we don’t mean an action game with attributes that you can level-up, we mean the more traditional kinds, and that means everything from big open world western RPGs like Skyrim, to Japanese turn-based RPGs. This year our top recommendations are the new South Park, which provides an incredibly accessible take on Japanese Role-Playing games will still being so incredibly… South Park; and then Persona 5, a game I have not yet personally had the pleasure of playing but has seen rave reviews thanks to not only its style and gameplay, but the fact that it packs in over 100 hours of content. We only feature 2 games, but I also highly recommend you check out Final Fantasy XV, it’s pretty different to FF titles from the past and it’s really rather good!

Most sports games these days come out in an annualised format that offers updates more than major sequels, that said, not all updates are created equal. This genre generally revolves around the interest of the gamer, so if your kid or buddy is way into Cycling, the latest NFL title will likely not scratch that itch. That said, good games are good games, here’s our recommendations:

It’s a genre that’s as old as the hills that still manages to command our attention, provide intensely gameplay and always attract a lot of artistic style. Cuphead oozes style with its 30s Disney Animation aesthetic, but be warned as it’s essentially a tough-as-nails “boss battles” game for the most part, so put your game-face on for that one. Another title that is just raking in the love is Steamworld Dig 2, and falls into the “Metroidvania” that usually means lots of gradual exploration and improvements as you open up a map more and more.

Put on your thinking caps, it’s time for some strategising as you face enemies on the battlefield, or maybe in a parking lot. There wasn’t a ton in terms of strategy this year, but the Xbox One did see the release of Halo Wars 2, the follow up to a possibly very under-appreciated first run that was rather good. XCOM 2 expands and also brings turn-based strategy to the plate with another great entry.

Like to sit down and relax to an evening of standing up in front of your couch and being on edge? Well then, horror it is. A fascinating genre that I myself am quite fond of, but not really… right? Well buckle up and get ready for a case of the spooks with these two titles. Resident Evil 7 returns the series to its horror roots, while also switching to a first-person perspective. Evil Within 2 gets a sequel that seems to be a little overlooked, and while not technically a complete survival-horror, I really had a great time with the slower-paced, cautious pacing delivered in this year’s reboot of Prey.

Well, there you go folks!

We hope you enjoyed and/or found our guide to be useful one way or another. We hope it helps you to find something to play, or better yet give the gift of gameplay to someone you love or care for! If you enjoyed the post or think it could be useful to friends, family or others it would be AWESOME of you to share it on Facebook, Twitter, your blog or your chat groups!

Also, if you have any comments on any of the suggestions or you have some other great suggestions yourselves, remember that it’s impossible to get everything for everyone into something like this so leave comments below and do a bit of guiding yourself! We’d love to hear from you.

To all our readers and new visitors, I would love to wish you all a wonderful holiday, work break, new year and religious holiday! If you share the tradition of Christmas with us, then a very big, warm Merry Christmas to you all as well! We hope you all join us in embracing love, giving and acceptance in this new world that we hope will soon see and treat all as nothing less than perfect equals! Love and respect – Nick de Bruyne / Pennyworth Reviews