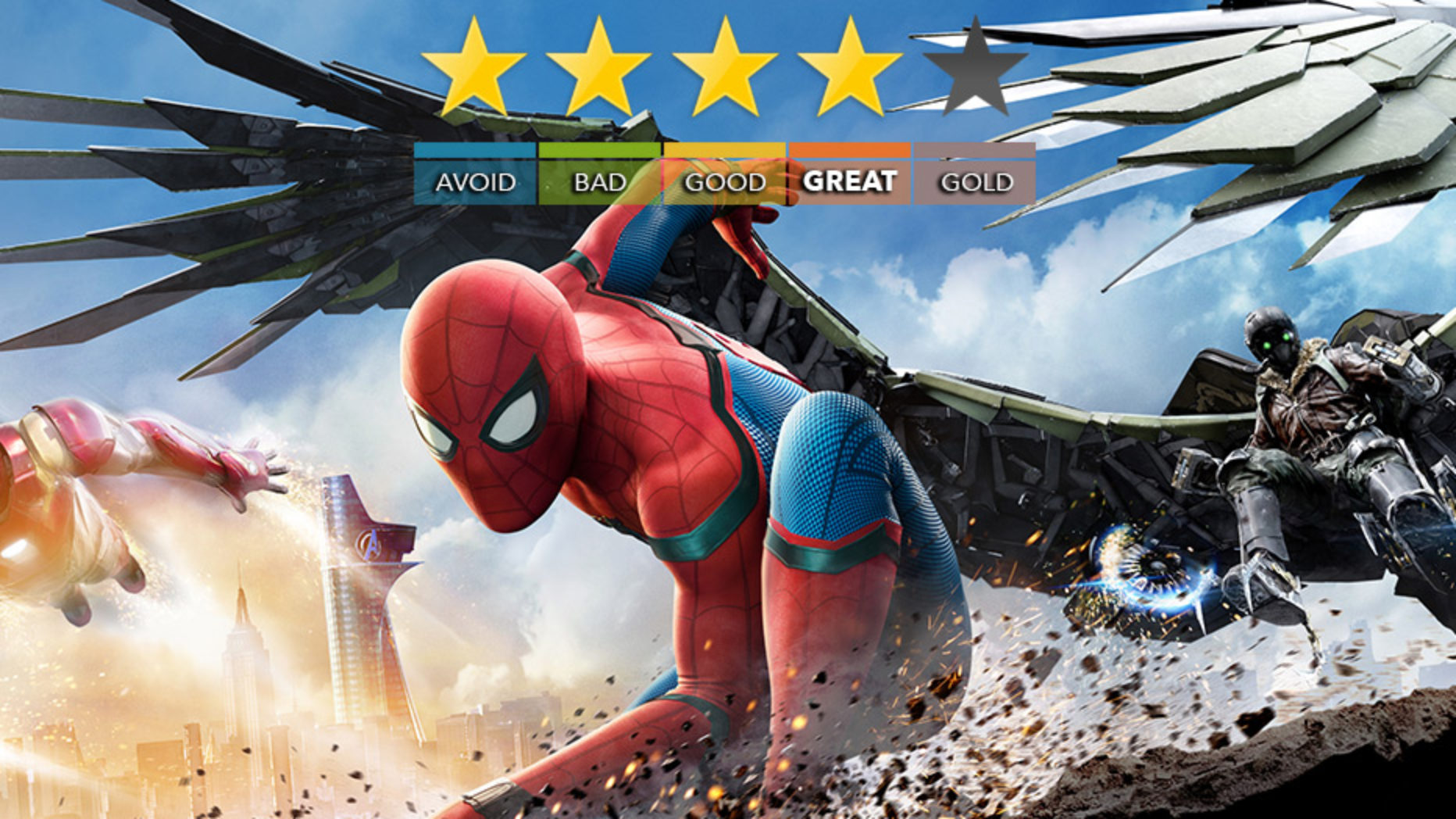 What is it? Not a follow-on to any previous Spider-Man films; Homecoming inserts a newly cast (and definite future superstar) Tom Holland into the Marvel Cinematic Universe as a 14 year old wet-behind-the-ears Spider-Man / Peter Parker.

Cons: Sets a very high bar for humour during the opening moments and then fails to explore it further or push it up that high again.

Verdict: Fun, Funny and Innocent – Homecoming finally takes us to school and reminds us of the joys that come with both being a Superhero and being a kid in school.

After a very brief appearance in Captain America: Civil War, Spider-Man finally hits the Marvel cinematic universe in all his webslinging glory with his own movie, and it’s just a good ol’ time. While the previous Spider-Man films were criticised for being a little too… moody, this film embraces Peter Parker’s youth and Spider-Man’s inexperience (under the guidance of Iron Man / Tony Stark) completely and delivers a fun superhero film that isn’t afraid to explore the ups and downs of awkward high school crushes and the kinds of blunders that only crime-fighters could find themselves causing. Fans get a whole host of hat-tips during the film and in many ways fans of cinema in general will get a kick out of the film’s love-lettery tribute to John Hughes movies like Ferris Bueller’s Day Off and Breakfast Club. Bonus: Almost zero references to his origin story, thank Odin.

Spider-Man may be wet-behind-the- err, do spiders have ears?– What I’m trying to say is, don’t think that Spidey isn’t going to impress you with his incredible feats of agility and speed as the movie delivers plenty of action set-pieces that will have you commiting popcornicide over and over again, but also shows the very humorous limitations of a character like Spider-Man. It has to be said that the film’s villain “The Vulture” played by Michael Keaton is just way, way better than expected and is somehow both believable and relatable for a guy in giant wings flying around like an angry bird. In some ways, I feel like the film may have been missing a certain something, but for the life of me I can’t put my finger on it… so I’m going to chalk it up to my mood on the day of viewing or even maybe that the trailers gave away a little too much. That said, I have a big feeling that I’m going to enjoy it more the second time around and this is the sort of movie I hope to see at least a handful of time.

The film might surprise you in ways you didn’t realise, it has some spoilerific moments that you’re gonna want to see for yourself and not on some dweeb’s Twitter timeline, so I really suggest that you see it for yourself as soon as possible. It’s fun, it’s pretty much everything you might want from a new, different Spider-Man movie and it sets us up for more web-head action in future. Also, yes do IMAX, always do IMAX.