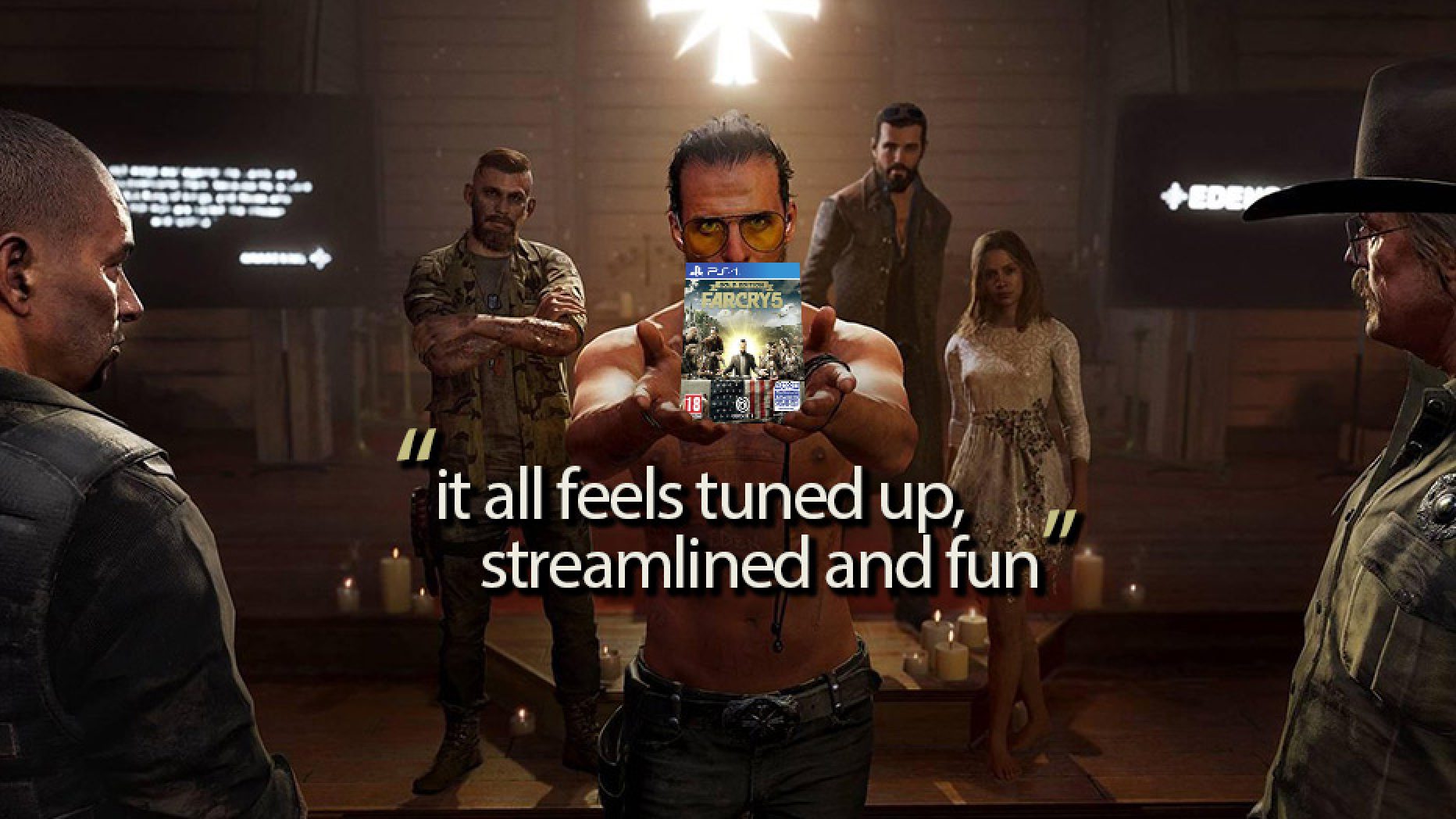 So where does this leave Far Cry 5 then? Well, at first glance it sure does look a whole lot like its predecessors, despite having an all-new setting in ‘MURCA and a bad guy that looks like a kooky, man-bun rocking Matthew McConn… McConau- who am I kidding, I can’t spell his surname without a Google search, you know who I mean; “alright, alright, alright” and all that (I made a right wing conservative joke with the title up there, you see). There’s no denying that Far Cry 5 is, mostly by luck, benefiting from the current state of the United States and its leadership, but it does lean heavier into religious fanaticism a la Waca / Red State more than it feels like it’s tackling any major hot topics like racism and/or immigrants. Either way it’s been handled in an interesting manor and really adds some flavour with my experience so far.

I’m a good chunk of hours into the game, and I’m pretty happy to say that so far the experience has been somewhat refreshing. I mean, it still feels like Far Cry… except that it’s… well, nicer. Now I can’t leave it at that of course, but what I mean is that it all feels tuned up, streamlined and fun. The guns feel and sound solid (complete with how the rumble on my PS4 pad was being utilised) and the overall tone conveyed through music, dialogue and some scenes gives the feeling that you should remember that you’re sitting here, playing this game to have a good ol’ time.

It leaves the world open to you, but there’s always something fun around every corner.

An industry friend said to me that they’ve trimmed the fat, and I think that nicely summarises the overall change. It’s still a Far Cry game, complete with big adventures, crazy antagonists, fun action and so on… but now you don’t have to spend so much time digging into it to get the best experience. Despite absolutely loving Far Cry 3’s concept of hunting to craft upgrades, Ubisoft have realised the novelty has passed and is only adding to the franchise fatigue, so they changed it back to a more traditional system. A prime example of how things have been tightened up along with new features and additions to make things fun, like Fly-fishing. It has fly-fishing now. I don’t even like fishing much in real life, but what is a game in 2018 without a fishing mode even?

You got a purdy mouth

The soundtrack is good too, and mixes some original compositions to meet that culty-worshippy vibe they’ve got going, but you’re also in for a treat with some really great rock classics. It’s also dang pretty when you see it running in front of you (I’m using the PS4 Pro in 1080p mode with supersampling activated) and a great job has been done to give the whole farmland and mountains vibe. It’s a nice place to hang out.

So as someone pretty bored with a franchise I actually liked quite a lot, Far Cry 5 really has me smiling so far. It leaves the world open to you, but there’s always something fun around every corner.

Check back for the full review soon.

Come now, let us respect a wish and pray for this man in my embedded tweet.