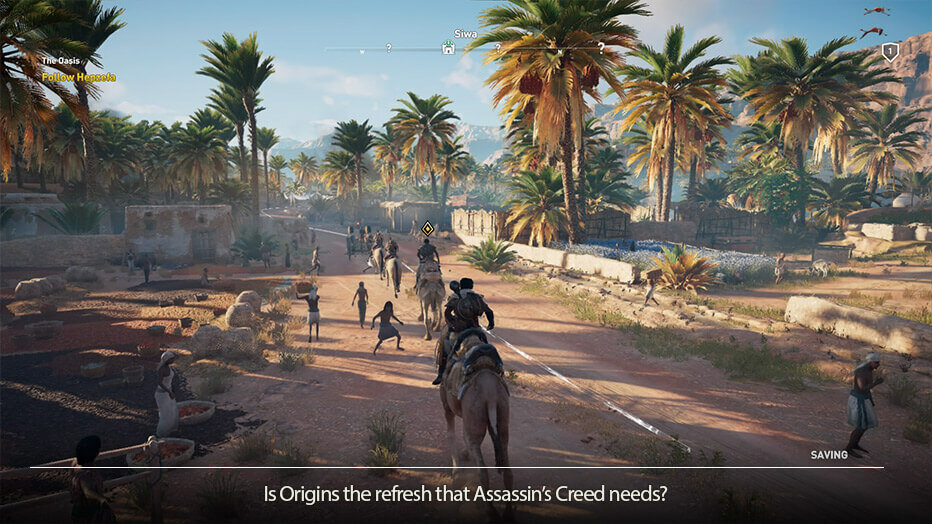 If you’re reading this on Thursday morning then we are just a short bit away from all the full reviews dropping on Assassin’s Creed: Origins. While we will have our own full review up in the near future, we have at the very least had the chance to spend some time with the game and are able to give a few preview / hands-on impressions of the experience so far.

As many of you already know, Ubisoft finally took a step back to have a bit of a breather and properly think about what they wanted to do with Assassin’s Creed after the annualised releases really just left the franchise feeling stale. This has definitely been my feeling as I grew more and more tired of each one. In my limited experience with AC:O however, I can pretty confidently say that this is the first new, fresh Assassin’s Creed game that I have played since… well, I want to say since Black Flag, but the truth is that it’s more like since Ezio first hit the scene in Assassin’s Creed 2.

Just as AC2 took the game to a new level, so too has AC:O. It’s the kind of game that feels like a true, real sequel, the kind that reminds you of the good things you liked about the previous game while giving you a fresh, expanded way to experience it. I’m gonna take one more moment to give a hat tip to Black Flag though, with my only issue with it being that I think it would have been ten times better if it wasn’t an Assassin’s Creed game and let us play full blown swashbuckling pirates instead. Back to Origins then.

Origins manages to feel both familiar and yet different, and this is evident early on especially with combat. Combat feels more exciting than before, and feels like a far cry (self-five) from the one-at-a-time-parry-parry-parry fest that many of the other games suffered from. Movement also feels responsive and refined, made all the better by what seems to be some really smart design choices, as getting around always feels nippy enough, whether you’re hopping about or motoring around on your hor- oh no, no… no horses here my friend, make way for my Battle-Camel losers. I also have a super deadly Eye-In-The-Sky-Assault-Eagle, and the speed at which you are able to quickly switch between a bird’s-eye view and back feels really intuitive and handy. This part is important, because Ubisoft opted to take out the mini-map, a move that I am 100% in favour of, and the result is that I’ve already spent more time looking at and appreciating the environments rather than just looking at a tiny map in the corner.

Visuals feel like a huge step-up, characters look detailed, in-game cutscenes and animations will please your eyes and the long-draw distance and detailed landscapes are stunning, especially when I mention to you now that I haven’t been playing on an Xbox One X, monster PC, PS4 Pro or any other new-fangled 4K HDR gizmo. No I’m just playing it on a standard PS4, with no HDR and normal HD and besides a few chugs on the framerate here (mostly in beefed up cutscenes) and there, it runs well and looks really nice. 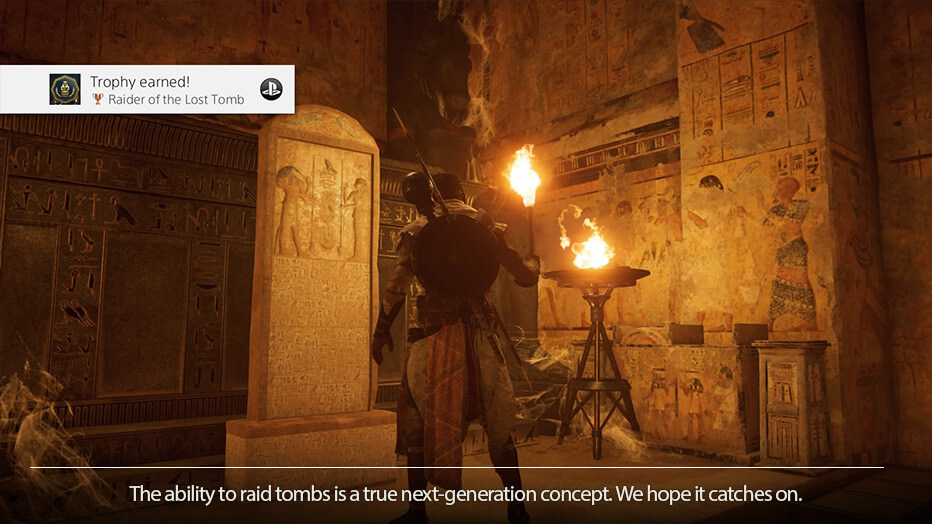 Horizon Zero Dawn came out earlier this year and Guerrilla Games basically drew a line in the sand and said “Mere mortals, we have done a greatest hits of your genre and perfected every aspect of it. So from now on you are either on our side of the line, or you’re a dinosaur, which means we are going to hunt you, kill you and take your parts to build arrows”. It’s not always fair to compare one game to another, but in a year where it feels like Horizon set the bar and (from what I’m told and have read) Breath of the Wild basically threw the bar into the damn river, it’s getting tougher to impress.

I have to keep playing AC:O to get the full picture, but I can definitely say that my first experiences with the game feel similar to Horizon Zero Dawn, and I only mean this in a good way. There are also obvious comparisons as this area of Egypt and some of the areas in Horizon give off very similar old-civilisation-desert-vibes. The genre feels like it has shifted a bit, especially with an expanded take on gear and upgrades, meaning that it’s moving a little more towards feeling like an Action-RPG rather than just an open world action/stealth game and I’m happy with the move. I still think Assassin’s Creed 2 was one of the best games of the year when it came out, but we never really moved past that game, despite adding on boats… and twins.

I must point out again that I was incredibly bored with the Assassin’s Creed franchise, so I think it really means something when I say that I can’t wait to jump back in and see where Assassin’s Creed: Origins is going to take me next. What I can say is that it feels pretty damn sweet so far.

Keep your eye out for our full review soon. Not seen the trailers for AC:O yet? We posted them for you here.