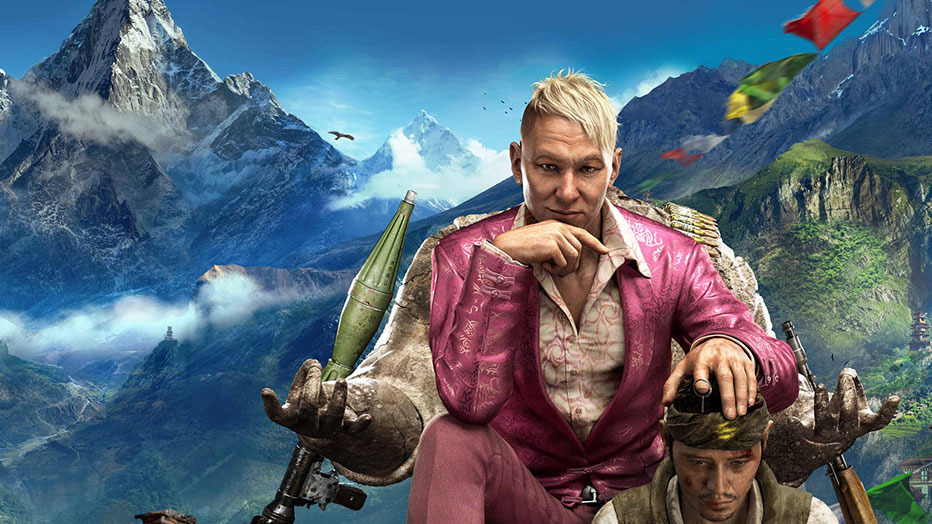 [UPDATE: Our Far Cry 4 Review is live and you can read it right here!]

Far Cry 4 is nearly out and not too long ago, at a South African video games expo far, far away… we sat down with Ryan Boyer, Production Manager for the Narrative Team on Far Cry 4 for Montreal Quebec, Canada. We asked the happy, easy questions and also some of the not so easy questions to bring you this last interview with Ubisoft before Far Cry 4 hits shelves.

We hope you enjoy this last round of questions before getting time with Far Cry 4 yourself. Will you be picking it up?

Pennyworth: We are big fans of atmosphere in open world environments, for Far Cry 4, what sort of elements and ideas were implemented into the open world and used to capture the essence of its Himalayan setting.

Ryan: That’s actually a really good question, so… there’s a few things. We picked the setting for multiple reasons, one of them is that we wanted to bring verticality/mountains into it and when you bring in the mountains, you bring in altitude changes which means your are gonna have flora and fauna change as you go up and down through the altitudes. We actually have a team dedicated just on the biomes, just dedicated to vegetation, making trees, making shrubs, making grass, making the paths that you see and all of those change as you go up and down.

The same thing for the animal life, its distinct. As you go up and down, everything changes. You’ll notice the weather patterns as well, when you’re in at the top of the mountains you’re going to have a lot of snow, a lot of snowstorms etc.

Far Cry has never been a brand that would shy away from this sort of issue. We have always tackled stuff dead on

Pennyworth: We interviewed Far Cry 2’s Lead Designer Director Clint Hocking with the release of Far Cry 2 in 2008 and Hocking’s vision of Far Cry took the series in a completely new direction now that it had a new home at Ubisoft. Far Cry 3 seemed to expand on and even perfect a lot of that concept with loads of content and interesting direction in terms of story and cast. What are the steps that Far Cry 4 have taken once again, to expand on and enhance what gamers love so much about the Far Cry games that will make Far Cry 4 memorable when looking back at its contribution to the franchise?

Ryan: I mean there’s tons of things really, that we’ve added in Far Cry 4. Far Cry 3 was a big success for Ubisoft and was critically acclaimed, so kinda tough to follow such a great success but we really think we’ve done it, we focused on the key elements that players are attracted to and we’ve increased them. So for example vehicles, we’ve added tons of new vehicles, we’ve also added drive-and-shoot, vehicle-to-vehicle takedowns. So before in Far Cry 3 you had to slow down and pull in front of a vehicle, everyone would get out, do this crazy dance… now its seamless, you can actually do combat as you’re driving around in the vehicle.

That’s just one example of something that we have focused on and improved so that we can make the game faster, more seamless, more realistic.

Pennyworth: What is the most exciting thing about Far Cry 4 that you think hasn’t gotten the attention it deserves?

Ryan: When you ask a developer, “What are you most excited for” or “what is the big thing in Far Cry 4” it’s tough for me to pinpoint one thing and I think that’s just a testament to the kind of game we are making at Ubisoft. It appeals to a lot of different people and we’ve really made a quality game across a wide spectrum of approaches to it.

Something that falls through the radar, something that I really enjoying doing is just enjoying the open world right now. We talk about how the wildlife is there, how we have NPCs that are performing duties, we have people who are working on rice patties, we have people in villages who are hanging up their laundry… the world is really, really alive and as you walk around it, you just get that sense that this is high quality work that we’ve put into it, a lot of time and patience and a lot of passion.

We built the world and then we populated it with activities and the missions, but before any of that, it needs to be a live world. You need to feel that as a player.

I think it [gaming] just brings people together

Pennyworth: When using a gamepad on PC, will the game play the same as the console versions in terms of aim-assist and controller feel etc?

Ryan: (This was only able to be answered for us after the fact, we posted up Ubisoft’s reply here.)

Pennyworth: In the 2008 interview I conducted with Far Cry 2 producer LP Pharand and Lead Director Clint Hocking, I asked them how they had approached the setting of Africa with regards to the sensitive nature of Africa’s history with racism (original interview is still available here on Lazygamer.net) . LP Pharand was quick to respond that he felt that it was time that games began tackling these issues the way films and books have tackled them for so long. Now years later we saw a bit of a noise being made with the first released images and art for Far Cry 4. Six years down the line, we think its crucial that topics like this are not swept under the rug, do you think that video games have come a long way when it comes to tackling these issues, or do you think that the industry still has a bit of a way to go?

Ryan: I think basically, that we’ve made progress but Far Cry has never been a brand that would shy away from this sort of issue. We have always tackled stuff dead on and the reality here is that you are getting dropped off in a country that is under a civil war, these people are oppressed, they are pretty much under the rule of a self-proclaimed dictator King and when you have that as a setting, there’s going to be issues within that, that are sensitive to some people absolutely.

Yeah no, I do think that progress is being made. I think that more developers are willing to tackle some of these issues, I’m not surprised that Far Cry is at the forefront of some of these issues because really we don’t shy away from them, we are willing to tackle the stuff dead on and we have some really creative and intelligent writers and creative directors on our project.

Pennyworth: What do you personally love about video games?

Ryan: With me, its community. I love playing single player games on the couch with some friends and we pass the controller around or we’re playing multiplayer stuff, I think it just brings people together and first thing the next day at work we’re talking about the fun time we had with games at night. So I just think it brings people together, absolutely.

We would like to thank Megarom South Africa for organising the interviews and for giving us access to the developers for our interview. A special thanks also to Ryan Boyer for answering our questions.