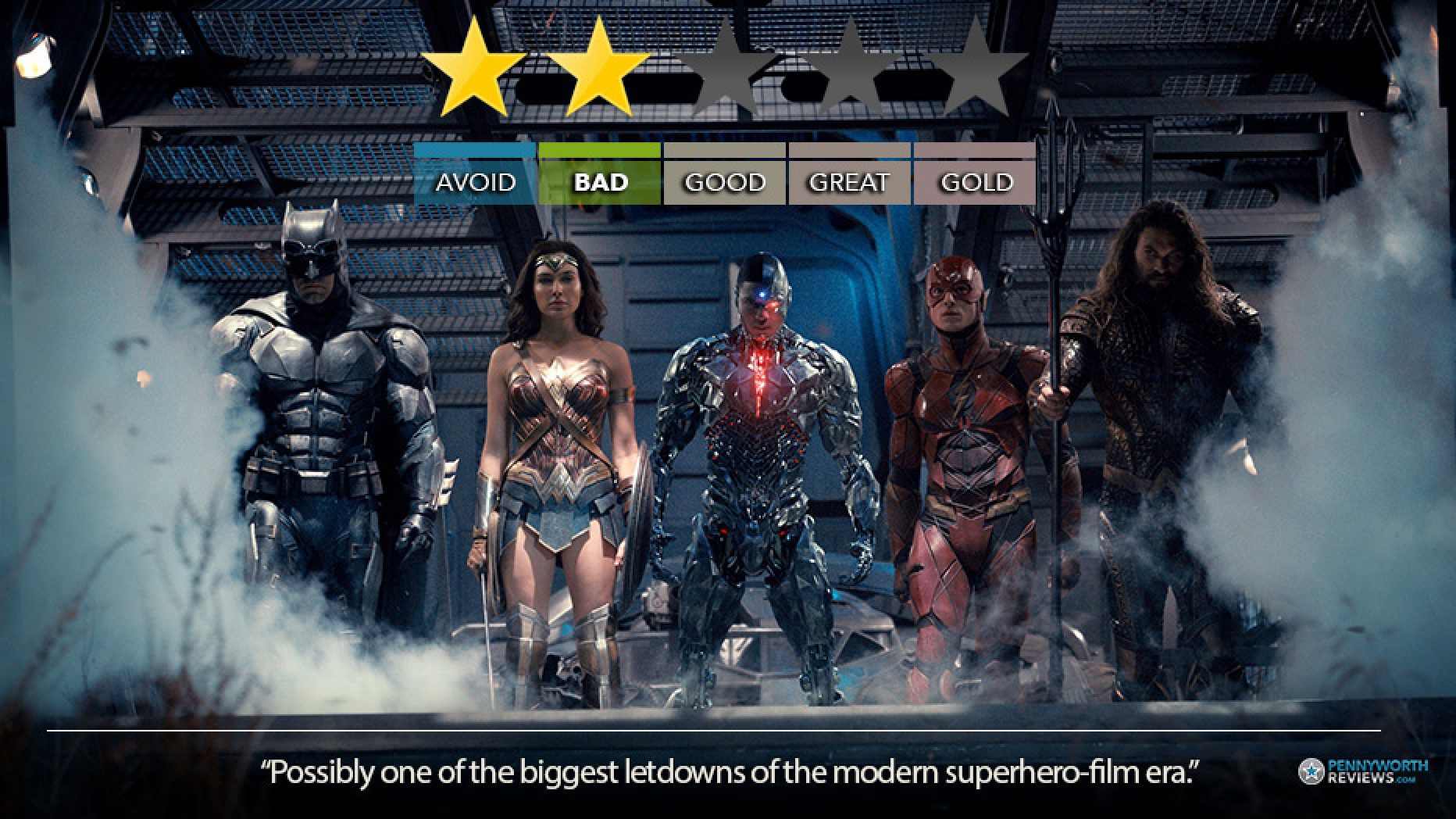 More an injustice. These characters all deserved far better

Summary 2.0 Fair
Movie 0
Special Features 0
Rewatchability 0
Summary rating from user's marks. You can set own marks for this article - just click on stars above and press "Accept".
Accept
Summary 0.0 Avoid

What is it? The first film in the current DC Comics Cinematic Universe to bring a bunch of their major heroes together for a group-up flick a la The Avengers. After Superman’s death in Batman v Superman, Bruce Wayne starts putting together a team of super-powered folks to take on an invasion from aliens that seem all too aware that the son of Krypton bought the farm… not not the real f-. Moving on.

Verdict: Do not recommended. Possibly one of the biggest letdowns of the modern superhero-film era.

I need to kick things off right away by saying that while some people thought Man of Steel wasn’t so great, I get what they’re saying but still liked it. Some people said Batman v Superman was a complete trash pile, but I defend it to this day, especially the extended cut. Wonder Woman was awesome despite its flaws, I think we can all agree on that. Heck, I didn’t even mind Suicide Squad all that much.

So it is with that out in the open that I say that I’m not sure I’ve been this disappointed and shocked with the quality of a superhero flick… well… maybe ever. Justice League is plain bad. Not “Ryan Reynolds’ CG Green Lantern suit looks dumb” or “I wanted Batman and Superman to fight more” bad… I mean it doesn’t in any way reflect the quality or experience you would expect from a high budget, action film based on some of the most iconic heroes of all time – and even makes many of its characters mere shadows of their portrayals in the previous films.

Halt! A quick bit of context is needed here. What you need to know is that Joss Whedon (The Avengers) was brought in to lighten up the script and fix some issues (in its previous state it was apparently being labeled as “unwatchable” but after the death of Director’s daughter, Whedon was brought in to finish the film, which led to a TON of reshoots. As a result the film is a messy mish-mash of inconsistent tone, scenes that don’t feel quite right and possibly the worst part of it all… the fact that because most of Superman’s scenes were reshot by Whedon, Henry Cavill had a big-ass moustache from another film he was working on, and they had to edit the ‘stache out digitally in almost all of his scenes… and it’s so incredibly noticeable and weird looking that you just can’t… you just… I literally couldn’t and still can’t right now.

This is a complete waste of the first attempt at a Justice League film. The plot is generic and almost doesn’t matter, in fact I was bored; the fully computer-generated villain is uninteresting and the production quality felt closer to that of a medium-budget television series at best. I’m not joking on that one. So much of the film involves digital backgrounds and characters (done badly) that you never really get invested in the scenes because it feels more like a cartoon (the fact that this was reviewed in standard definition on DVD may have a bit to do with this). Cyborg’s CGI body looks so bad, it feels like it was the pre-viz version and they didn’t have time to render the final visuals. Also we get it guys, Aquaman is like soooo bad-ass and not some lame fish-guy, enough already. Parts of the original musical themes from Reeve’s Superman and Keaton’s Batman are in the film, which to me serves as proof that the studio is not fully invested in this universe they have created. There really is just so little to love about this movie, and I think the studio feels that way too.

If there’s one major positive in the film, it’s The Flash, played by Ezra Miller. Miller’s performance and personality was great fun to watch on screen, especially mixed with a squeemish, dweeb of a character that can do things that are so much fun to watch. If anyone needs a standalone movie right now, it’s this guy.

As for the “DVD” part of this DVD review, I thought there was a typo on the menu label that said “Special Feature” with no “s” at the end but no, there really was only one special feature. It’s a small history lesson on the Justice League’s origins and how they evolved in the comics leading up to this point, and if anything it was the final nail in the coffin of this DVD experience. All it did was give me so many reasons to believe that the Justice League deserved so much more than this. Thanks for the reminder.