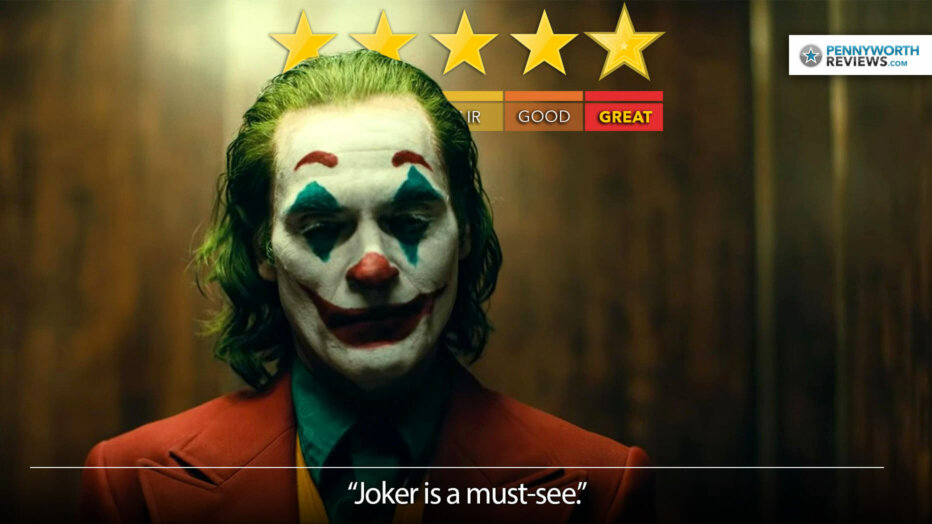 What is it? Arthur Fleck is a man who believes he was born to make people smile. Sadly, the city of Gotham and its citizens don’t see it that way, instead inflicting cruelty on a man whom they regard lesser than the rats that infest the streets. He is held back by his love for comedy, taking care of his frail mother, and harbouring feelings of affection for a friendly neighbour. That all changes as Arthur gets involved in a violent act that threatens a city already on the edge. He begins to embrace his role in life: Taking shots at folks who just don’t get the jokes.

Joker is a must-see. A story taking place in a world brilliantly framed by Todd Philips, one watches as Joaquin Phoenix travels down a path of suffering. Phoenix’s performance is both engaging and repelling. It is the result of societal neglect and abhorrence, spurred on by a sickly sense of humour that eventually comes to the forefront in a big and bloody way.

Leaping for the bars set by the likes of Logan and The Dark Knight, Joker is a razor-sharp demonstration of comic book storytelling on the big screen. In a year where popular cinema reached its zenith in the form of Avengers: Endgame, Joker takes its source material and throws it down into a deep dark well of despair. Resulting in a terrifying depiction of one of the medium’s most memorable characters.

Ever danced with the devil in the pale moonlight?

Joaquin Phoenix’s performance as the Clown Prince of Crime is a piece of master-class adaptation and acting. Able to stand out from previous iterations of the Joker, Phoenix spins it into a man whose laughter is not only unsettling to those who hear it, but also painful for Arthur Fleck to emit. Coming from a human body so contorted and thin that it looks alien-like, it embodies a man that realizes the being that a society has made him out to be and comes to fruition. The devolution on screen is more emotional than it is psychological, which may disappoint those expecting a greater quantity of violence from the film. Arthur’s feelings are at the forefront and their establishment takes precedence over seeing them being acted upon. However, when they are acted upon, it is with brute force and a casual shrug-off from our main character.

Director Todd Philips gives Phoenix a world to play in that is exquisitely put together and drips atmosphere like the blood that is ultimately spilled. Heavy saturation makes for grotesque colours ideal for the circus that is Gotham City. “Gotham has lost its way”, as the tagline goes. Its people are indistinguishable from the rest of the garbage. Arthur’s story is well paced and structured, shot in the gutter of 1980s aesthetic and accentuated by a chilling musical score. Philips clearly got tired of telling jokes and has shown he can direct some delicious drama.

Joker is a triumph of cinema. It demands your attention and deserves to be seen. Even if just for Phoenix and his cackle.