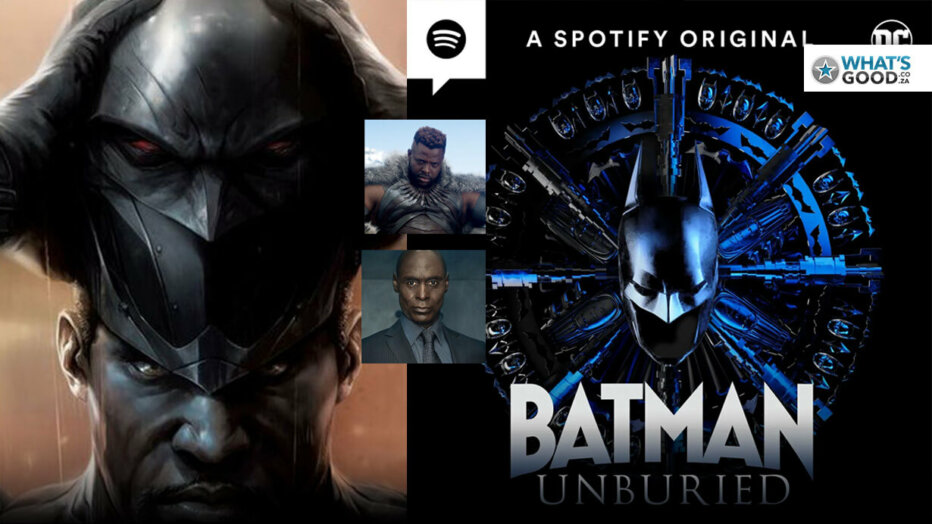 We love Batman around here. Hell, who doesn’t? If you haven’t heard of Batman Unburied, we don’t blame you – we’d heard pretty much nothing about it either.

What you DO need to know, is that it’s an episodic podcast created by David S. Goyer in the vein of the radio dramas of old, and comes complete with an all-star cast, sound effects and music. It’s fantastic, and new episodes release every week.

What you also might not know, is that the Batman Unburied story takes a few turns from what you might expect, most notably that Bruce Wayne is a black man – and someone who is working as a forensic pathologist, and that his parents Thomas and Martha are still very much alive. Bruce is obsessed with a series of murders by a killer being labelled “The Harvester”, and things get very interesting very fast as he works to unravel the mystery.

The aforementioned all-star cast includes Winston Duke (you may know him as M’baku from Black Panther or the dad from Jordan Peele’s “Us”.), who adds a very sincere but disturbed  tone to Bruce, as well as Lance Reddick, John Rhys-Davies, Ashley Burch, Jason Isaacs, Sam Witwer and more.

Listen to the Spotify Trailer right now, and if you’re a Spotify user, I highly recommend heading over here and listening to it when you can.

A serial killer known as The Harvester terrorizes Gotham City, but Batman is not coming to the rescue.

In fact, Bruce Wayne has no memory of being the Caped Crusader at all. Instead, Bruce is a forensic pathologist, performing the autopsy on the latest victim when he’s attacked by the killer himself.

As Bruce’s obsession with the Harvester consumes him, Dr. Thomas Wayne, head of Gotham City Hospital, orders his son to take medical leave and seek treatment from an unusual psychologist, Dr. Hunter. With Batman missing in action, Detective Barbara Gordon is left with no other choice but to seek help from Gotham’s second smartest detective: The Riddler.

Batman Unburied is created by David S. Goyer and stars Winston Duke, Hasan Minhaj, and Gina Rodriguez. Batman Unburied was produced by Phantom Four & Wolf at the Door in association with Blue Ribbon Content and DC for Spotify.